(Another) Night of the Living DEAD BOYS 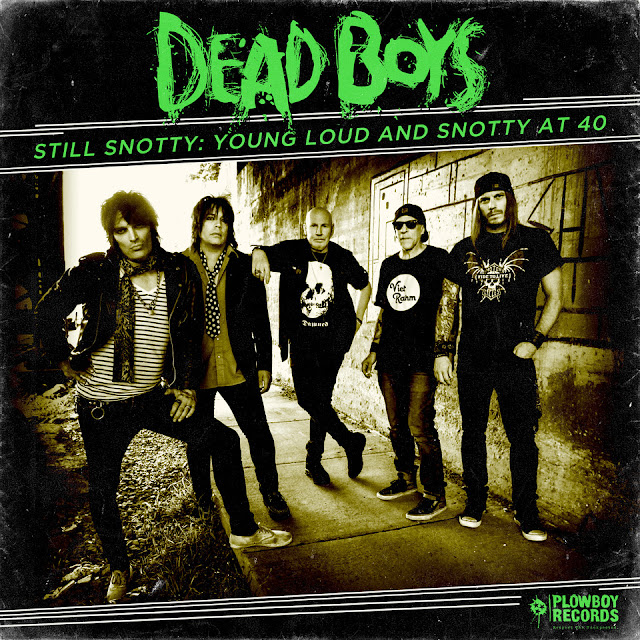 “It’s been a little on the reckless side; the crowd’s been pretty crazy. My favorite guitar got broken, but other than that, it’s been good!”

The above words were delivered to me with a chuckle by Cheetah Chrome, a guy who’s still on the road touring when most people his age hit the sheets by 9pm. Easily one of the most resilient and inspiring characters in Rock ‘n’ Roll (and one of my absolute favorite people to interview), Chrome has been creating amazing music with his six-string since the mid ’70s – first with Cleveland’s legendary Rocket From The Tombs (featuring future Pere Ubu members David Thomas and Peter Laughner), then with original CBGB-era Punk kings The Dead Boys (as well as their short-lived original Cleveland incarnation, Frankenstein). Currently living in Austin, Chrome is spending 2017 celebrating the 40th anniversary of The Dead Boy’s classic ’77 debut, Young, Loud And Snotty, by putting together a new version of the band (including original drummer Johnny Blitz), re-recording the album and putting out a new version called Still Snotty: Young, Loud And Snotty At 40 (released last week on Plowboy Records). Chrome and his comrades are also currently on a US tour that will run through mid-November.

The new album and tour mark the first time Chrome and Blitz (who also drummed for Rocket From The Tombs) have played together since a 2005/2006 Dead Boys reunion alongside fellow classic-era members Jimmy Zero (guitar) and Jeff Magnum (bass), which saw Chrome handling the vocal spot left by the 1990 death of Stiv Bators.

“Me and Johnny have been playing together since we were 15. We learned how to play together, and it’s really fun being back with him.”

That’s all fine and good, but a Dead Boys reconfiguration in 2017 is clearly missing one hell of an important ingredient. How in the world could anyone replace Stiv Bators? It’s been nearly 30 years since the guy passed away; who would have the balls to take over that role? Ladies and gentlemen, Chrome and Blitz have found their fucking man.

Enter Jake Hout, singer for “zombie” Dead Boys tribute act The UNDead Boys and the closest approximation of Stiv Bators you’ll ever get from anyone who’s actually breathing.

Detroit scene legend Ricky Rat, who previously shared the stage with Chrome when he was playing with Texas Terri, is on bass. Jason “Ginchy” Kottwitz, a long-serving member of Chrome’s solo band, rounds out today’s Dead Boys on second guitar.

“To me, it’s amazing how the dynamic’s pretty much the same [as with the original band]. These guys are nuts, too! It’s really cool; I’m really enjoying it because it feels like a band.”

While this new lineup is an undisputed powerhouse, there are two other original Dead Boys still walking the Earth who are not involved in the present band’s activities. Addressing the elephant in the room, Chrome blames health issues for Zero’s absence – and points to personal conflicts as the reason for Magnum staying home.

“Jeff’s just not the right guy for this band. In order to save a lot of time and trouble, I had to make that call. I don’t think he was into the original band that much. He missed a lot of gigs. He let us down several times, and he bitches incredibly. Do I need to keep going, or can I stop?” (laughs)

By re-recording Young, Loud and Snotty, Chrome and Blitz can finally address an issue that has bothered them both for decades. As brilliant as that album was and still is, Chrome insists that it was only meant to be a demo. Once Sire Records released the album without the band’s official go-ahead, they were stuck with it – until now. Chrome is happy to finally get the guitar sound he intended to have on the record all along, while he says Blitz was pleased to be able to spruce up some odds and ends behind the kit.

“It was really fun going in with this band and doing it. We were hot from the road; we were in Nashville for a couple of days and just did it.”

Naturally, the fact that Chrome and Blitz are this willing to redo moments from their past raises an important question: Will their second album, 1978’s Felix Pappalardi-produced We Have Come For Your Children, receive the same treatment?

“I sure fucking hope so!” the guitarist replies. “If ever a record needed to be fucking redone, it’s that one. It sucked.”

In addition to reimagining past recordings, Chrome has set his sights on re-releasing the original Dead Boys studio albums as box sets, although he’s quick to add that Warner Brothers (Sire’s parent company) has been “slow as fucking snails” in coughing up the original masters to make this plan a reality.

The new record and tour also serve to rectify another dilemma in The Dead Boys’ history: Cash. Like many musicians from the original Punk era, Chrome knows all too well that legendary status doesn’t always equal financial rewards.

“My publishing deal sucks; I’ve been trying to get out of it for 20 years. I receive some [money] when like Guns N’ Roses or somebody does [our music], but our fucking sales are nothing.”

Also worth checking out is Dead Boys 1977, an incredible new hardcover book by photographer Dave Treat that chronicles the band’s earliest days in Cleveland.

“Dave Treat was a good friend; he was right there at the very beginning with us, and he got some amazing photographs. One of them was the prototype for the cover [of Young, Loud And Snotty], but [Sire Records head] Seymour [Stein], in all is wisdom, said we needed a professional photographer to do it. It turned out all right, but Dave’s shot was better. I’m happy [the book] is out; it catches everybody in good moments. It really shows us back when we were a team and a real band.”

Looking ahead, Chrome intends to record new Dead Boys material and add to his band’s legacy.

“I see this whole thing going forward. The anniversary is the anniversary, but we still want to make some new music, too.”

He also intends to release a follow-up to his 2014 solo EP (called – what else? – Solo) in the not-too-distant future.

“I actually have some stuff in the can that’s on hold because I’m in the unfortunate position of competing with myself, which is kind of stupid to do. But there’s definitely some new Cheetah Chrome stuff coming, too.”

And that ain’t all, folks. During our chat, Chrome revealed that he has been in contact with the inimitable David Thomas about working together again.

“Me and David are in touch about doing something –  just a me-and-him project – at some point before we die. I want to do something a little crazier than [Rocket From The Tombs].”

Thanks to Still Snotty: Young, Loud And Snotty At 40, The Dead Boys are finally able to bring their iconic music back to life and show the rest of us how the real deal is done. Since he’s had this opportunity to bring his previous work into a present context, what does Chrome see as the magic formula that has allowed The Dead Boys’ music to survive and remain so powerful even after 40 years?

“We were fucking good; we could play! We cared; we gave a shit. We took what we did [and] put it on vinyl, and it shows. The cream rises to the top. I think we were the fucking redheaded stepsons of Rock ‘n’ Roll, but we’re still here.” 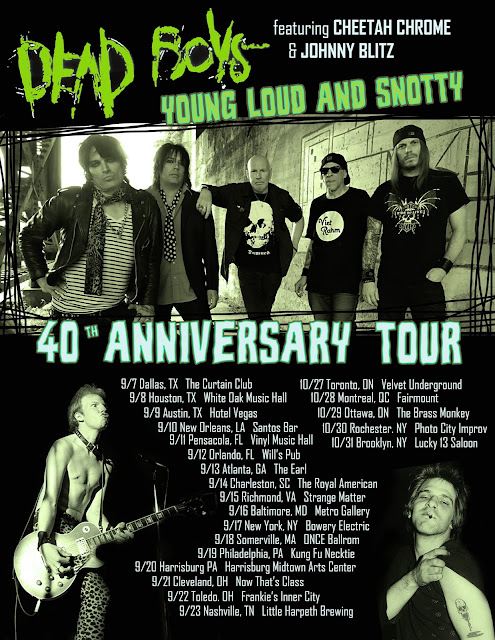