As previously discussed on this site, Anatomical Venus by UK Doom/Stoner Metal act Black Moth is one of the most intense - and essential - listening experiences released so far this year. If there’s ever a song worthy of serving as an anthem for the #MeToo movement, it’s the fiery “Sisters Of The Stone” - a track (and captivating promo video) that’s been turning heads since its debut earlier this year.

I recently touched base with singer Harriet Hyde to discuss Black Moth’s new album (their third), the inspiration behind “Sisters Of The Stone” and where the growing attention directed towards the band may lead them in the future.

Anatomical Venus is your first album in four years. Why was there such a long stretch of time between records?

It’s actually three and a half years, but I get your point. (laughs) Actually, we recorded the album over a year before it was released. There were so many bureaucratic delays, as we changed record labels from New Heavy Sounds to Candlelight/Spinefarm, which was incredibly frustrating and a real test of patience! Other than that, we prefer to take our time until we have an album we are really happy with rather than churning them out. It’s not so easy now that we live in different cities as well and are a little bit older. We have actual lives outside the band!

The new album is much heavier than your previous work. Was this an intentional goal going into this album or something that naturally developed as the material was being written?

We don’t tend to like writing with a specific purpose in mind, as that can stifle creativity for us. However, it is certainly true that we were tired of hearing people say that we are much heavier live than on record! So sonically, we were conscious that the production must capture more of the weight and energy of our live show. 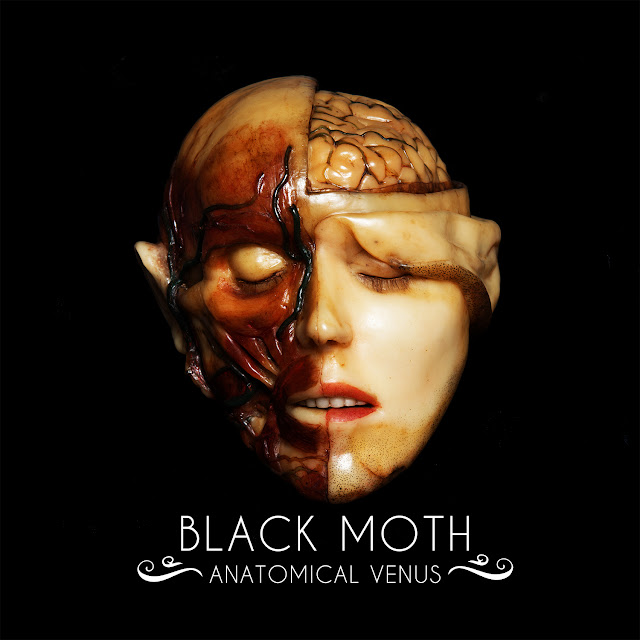 How has the addition of [new guitarist] Federica [Gialanze] most impacted where the band is now in terms of the overall sound and the direction you took on the new album?

Fed is a Heavy Metal guitarist to the core. She replaced [former guitarist] Nico [Carew], who was a great player but from more of a Surf/Punk/Rock’N’Roll background. Having an absolute shredder on board has definitely catalyzed a move towards a more metallic sound. She also has some quite Proggy influences, and I think they creep into the songwriting, too! She and Jimmy have a fantastic writing and performing relationship, so you can hear a lot more Thin Lizzy-esque harmonies in our new stuff – and lots of sword-crossing onstage!

The lyric video for “Sisters Of The Stone” has been getting a lot of attention. What was the inspiration for the song, and what is the takeaway you’d like listeners to get from the finished product?

The song itself was inspired by some shocking stories I had heard from close friends about abusive relationships. One day, I went into the rehearsal room just seething with rage about the maltreatment of my female friends, and it started there. I had Tarantino’s Death Proof as well as the Furies of Ancient Greece in mind when writing, and I imagined a vigilante troop of women who would seek vengeance for wronged sisters. I also think there were notable ripples of violation felt by many women in the aftermath of the exposure of America’s ‘pussy-grabbing’ President. It felt very appropriate to release this on the centenary of votes for women in the UK and with the wave of female empowerment around #metoo/#timesup campaigns.

The label asked us to make a lyric video, and I often find these quite cheesy! Luckily, I met [director/producer] Noomi Spook, who is incredible. She used vintage archive footage to build a video montage ‘herstory’ of vintage archival footage. Noomi dug out glimpses of female power excavated from the swathes of old footage of Stepford Wives advertising domestic bliss.

Jim Sclavunos [Nick Cave and the Bad Seeds/Sonic Youth/Grinderman/The Cramps] produced your previous two albums, while Andy Hawkins – who was involved with your last album, Condemned To Hope, as an engineer – produced Anatomical Venus. What led to this change, and how do you feel it most impacted the new record?

Jim was amazing to work with, and it certainly isn’t the end of our relationship with him! We learnt so much from him and grew as musicians with his support and encouragement. We know Andy very well from working with him, and [our bassist] Dave [Vachon] had been helping him to build The Nave – his stunning new studio in Leeds. It is a conversion of an old church and a fantastic space. Andy offered us a whole month in the studio, and we were intrigued to see what we could create together. The man is a true eccentric and a bit of a mad genius - fueled entirely on cups of Yorkshire tea! We felt more relaxed than ever in the studio this time, with more time and experimentation with a new producer, and I think that had helped to keep our output varied and interesting.

Your previous band, The Bacchae, had a clear ’60s Psychedelic influence, while Black Moth are obviously taking things in a more Metal direction. Why did you decide to follow this musical thread as opposed to carrying on with the vibe you established with The Bacchae?

I think The Bacchae never quite managed to pin down our sound, and when [our drummer] Dom [McCready] came along, our sound became more cohesive and our mission became clearer. Dom is a heavy hitter and brought a heavier, metallic leaning to our songwriting. It was so much more fun to play live that we never looked back! We found our calling!

What are the chances of seeing Black Moth in the States in the near future?

Well, we would absolutely love that, but to tell you the truth, it is extremely expensive for a UK band to get over to the States. Fingers crossed, a feasible opportunity comes up, because we have a lot of people asking for us over there!

This is your eighth year as a band. What has been your greatest achievement so far, and what are your greatest hopes for the future?

For me, the greatest achievement was supporting L7, a band who made an immeasurable impression on me as a young woman who loved music. They made me want to be in a band and showed me I could do it… and on my own terms. My only hope for the future is to reach more people with our music and continue to create raw, exciting songs straight from our souls to your ears! If we can play more shows around the world, that would certainly be a bonus!