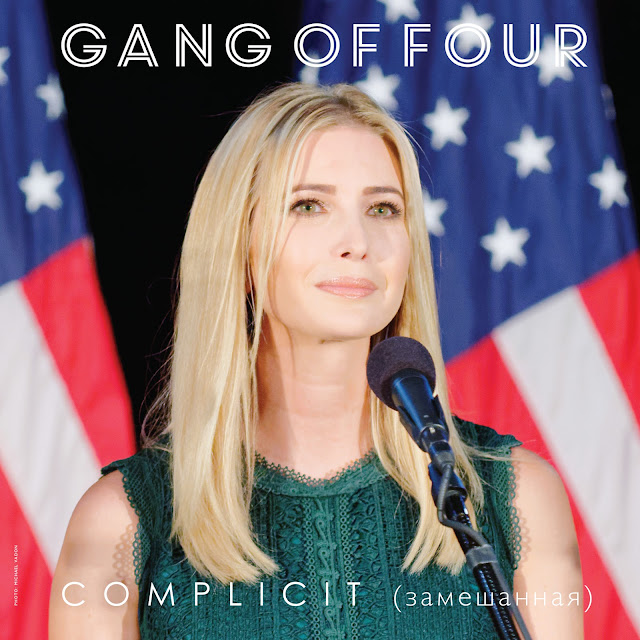 “So… an EP with songs about sunshine and surfing, then?”

That was my initial thought when I received an advance copy of Gang of Four’s upcoming EP, Complicit, and peered at its cover. First Daughter Ivanka Trump is pictured smiling in front of American flags, while the release’s title (and, presumably, its Russian equivalent) takes the bottom. Naturally, the image has received quite a bit of major press in recent days. Not only is it a ballsy move for Gang of Four (currently led by guitarist/sole original member Andy Gill) to make in 2018, but it’s a surprisingly overt message by a band typically known to exist in a world of subtlety and grey shades.

As just one example, let’s take Gang of Four’s 1982 hit, “I Love A Man In A Uniform.” On its surface, the tune works as a brilliant dance floor number that could (as least in superficial terms) be interpreted as pro-military. However, a deeper journey into the song reveals everything from a subversive dig at societal perceptions of male virility (“The girls/They love to see you shoot”) to the Village People undercurrent of the Disco-driven chorus. Of course, I could be totally off in this assessment, but that’s what has made listening to Gang of Four’s body of work such an unceasingly fun endeavor over the years: They deliver the records, and then it’s up to us to make of them what we will.

(“I think Gang of Four, over the decades, has sometimes been guilty of trying to be our own reviewers and trying to really spell out what we think [a song is] supposed to say,” Gill told me in 2015. “I think sometimes, you can take away some of the magic in things by over-talking them.”)

What do I make of Complicit? Well, first of all, the cover is the least interesting aspect of this thing. What’s more intriguing is the fact that the EP’s three tracks (plus a remix of the song “Lucky,” which I previously discussed here) embrace the smooth and soulful Pop-focused (but no less incendiary) sounds of Gang of Four’s tragically overlooked early-to-mid-’80s period. “Ivanka (Things You Can’t Have)” could have found a comfortable home on 1983’s Hard, while “Lucky” sounds like a lost single off ’82’s Songs Of The Free (or even a missing track off Gill’s 1988 solo EP, Dispossession). It’s a peculiar turn for Gill and Co. to take at this stage in their career, as both of these aforementioned albums are often (and unjustly, in my opinion) viewed as their creative nadir. But if you’ve been paying attention to Gill’s version of Gang of Four over the last six years, then you know that he’s been steering the band in any direction he chooses.

The music contained on Complicit might not turn on everyone who has 1979’s Entertainment! permanently embedded on their turntable, but those of us who appreciate all facets of the Gang of Four discography will find plenty to appreciate here. (Complicit also has enough distorted guitar bursts and electronic beeps to give the tracks a fresh edge - but as a general reference on the EP’s overall vibe, think “Sleepwalker” off 1995’s Shrinkwrapped mixed with “Woman Town” off Hard.)

Considering that Gang of Four have utilized the talents of Dave Allen, Sara Lee and Busta “Cherry” Jones over the years, the bass is obviously a critical component of any Gang of Four release. Complicit is no exception, and the EP’s strongest moment comes courtesy of long-serving member Thomas McNeice’s raw and brutally funky performance on “I’m A Liar.”

Gill’s decision to carry on with the Gang of Four moniker has prompted a fair share of apprehension from fans in recent years (including on this site), but his previous output as the last man standing (including 2015’s What Happens Next) still offered strong hints that his vision of the band would eventually match – and quite possibly progress beyond – the band’s legendary early work. Complicit finally fulfills that promise and offers a fascinating teaser of where he might go with the next Gang of Four full-length album (due later this year). Forty years on, Gill is still gifting us with music that excites our ears and our minds.

Complicit is out April 20.

More on Gang of Four on this site