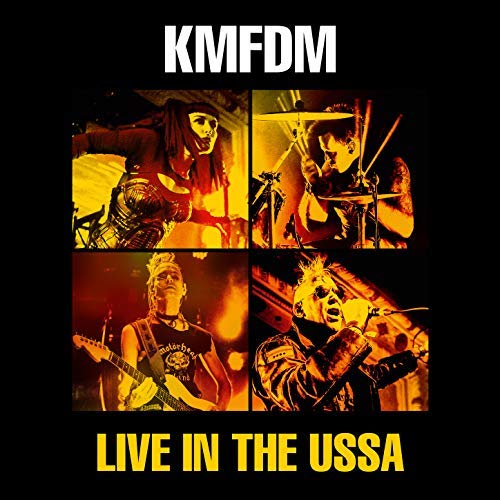 “Your government hates you!”

So shouteth Industrial veterans KMFDM on “Total State Machine” off their new live album, Live In The USSA. Never ones to do things delicately, KMFDM pummel the listener with a message as strong and anarchic as the music showcased on the collection’s 12 tracks. Mixing band classics and a healthy dose of material from last year’s studio album, Hell Yeah, this latest live collection (out today on earMUSIC) is the perfect soundtrack for current life in the country slyly referenced in its title. To learn more about Live In The USSA and the current state of affairs with KMFDM, I tracked down band founder Sascha Konietzko for the following interview.


Live In The USSA is a fairly provocative title in light what’s going on in America these days, and “Total State Machine” is pretty clear in its vitriol towards government. What is your take on the current cultural/political landscape here in the US?

Funnily enough, after taking a hiatus from KMFDM between 1999-2002, the very first single KMFDM released was named ‘Back In The USSA.’ Ever since, the reference stuck. My take on the situation is a mixed one. It really goes to prove for the first time in the recent history of the US that the system of checks and balances is far from effective and the often-referenced and revered  ‘founding fathers’ really never envisioned a scenario where fascists would come into power. As a German native, I am of course very familiar with the mechanics of a hostile takeover of a democracy. It doesn’t take much more than a mean bull in the proverbial china shop. Of course, denouncing the free press is also part of the curriculum, as is spreading fear of foreigners - Jews, Latinos, immigrants, etcetera. To top it all off neatly, never admitting anything that was obvious wrongdoing and keeping the  ‘audience’ breathless, i.e., dominate the news cycles knowing that the bigger the lie, the more likely it will be believed by the masses.

Half of the new live album is comprised of tracks from your most recent studio album, Hell Yeah, so it’s clear you’re pleased with the group’s latest released material. How would you rate Hell Yeah alongside the rest of the KMFDM discography?

Hell Yeah was just the latest release, so it was kind of obvious that we’d play a good portion of it on the tour immediately following its release. It’s a pretty solid album and was fun to perform live.

Considering the number of releases KMFDM has under its belt, what is the level of difficulty – if any – in selecting the songs to perform live these days?

It can get tricky indeed; trial and error have proven to be useful instruments when putting together a setlist for any upcoming tour. Then again, there’s 220-plus songs now, and audiences want us to play some of the ‘greatest shit’ frequently, which narrows down the flexibility by a bit, thank God!

Singer/keyboardist Lucia Cifarelli and drummer Andy Selway have been a part of KMFDM for many years now. How does their involvement most impact and benefit KMFDM’s creative vision and artistic goals?

I am working very closely with Lucia in developing new material, and Andy is a fantastic drummer and always provides valuable input on any level.

The version of “Godlike” on the new live album is incredible, and the song is obviously an undistributed classic for KMFDM and the genre itself. If you wouldn’t mind providing a history lesson, what can you tell me about how the original creation of that track came to be?

Initially, it was inspired by Patti Smith’s ‘Godlight.’ Whilst on tour with Ministry in early 1990, it somewhat morphed into ‘Godlike’ because I was constantly being asked by people about that track and the little Slayer riff in it; they had misunderstood ‘Godlight’ for being ‘Godlike.’

Of the 20 studio albums you’ve released under the KMFDM banner, which one would you say is the definitive representation of the group – and why?

That’s an impossible thing to say, since every album provides a sort of window into what was going on at the particular time of its creation, i.e. influences, lineup, environment we worked in, etcetera. Also, I find to my amazement, time and time again, that when you play an album with say, 10 songs on it to 10 people, each of them will have a different ‘favorite’ track on it. It seems, generally speaking, that if a person was, for example, introduced to KMFDM in 1995 with the then-current Nihil release, that’ll be their own ‘definitive’ sound. The same goes for people with any other release, and you most likely know it from your own experience that when one associates something when hearing certain songs from a while ago, it becomes a time marker in a sense.

We’re working on new material to be released in 2019, and then we’ll likely hit the road again.

KMFDM’s 35th anniversary is just a few months away. Longevity of that nature is rare in this business. In your mind, what has been the key to the group’s survival for all these years?

I think the longevity comes mainly from never having been a ‘band’ in the traditional sense. Bands tend to shrivel up over time over personal differences and things like that. KMFDM was always fresh in the sense that an ever-changing group of people set out to create something. Every album was approached almost like a one-off - let’s get together, do this and then everybody returns to whatever else they’re doing. And of course, this is what we’re good at. We suck at all else.