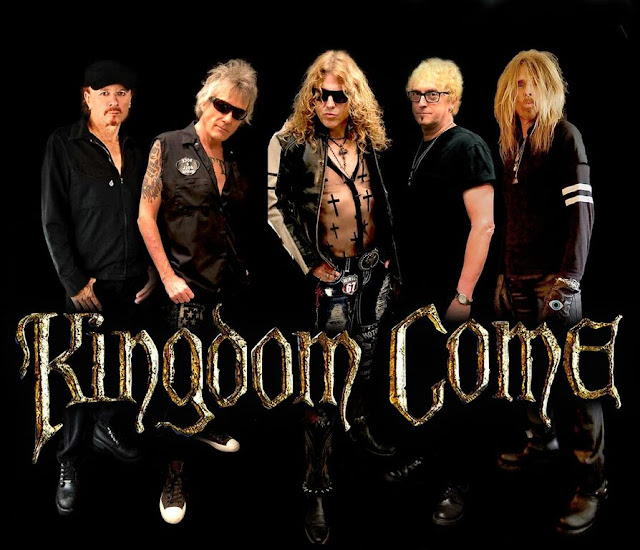 As previously reported on this site, four members from the classic lineup of Kingdom Come – James Kottak, Danny Stag, Rick Steier and Johnny B. Frank – have reunited to take their eponymous 1988 debut album (as well as material from 1989’s In Your Face) on the road for an extensive US tour. Veteran singer Keith St. John (Montrose/Lynch Mob) has stepped into the all-important frontman spot left vacant by longtime Kingdom Come leader Lenny Wolf.

I recently got in touch with Kottak – an accomplished veteran drummer also known for his time in The Scorpions – to discuss Kingdom Come’s decision to return without Wolf, the reunited group’s plans for the future and how to maintain a commitment to sobriety in one of the most demanding professions in the world.


Obviously, you’ve had a life and career beyond Kingdom Come. You’ve worked with a lot of great musicians over the last three-plus decades. Now that you’re back with the other three members of the original band, what do you think it is that makes the combination of you four guys so special and worth revisiting?

Because we’re friend. Me and Rick Steier, the guitarist, are both from Louisville, Kentucky. We’ve been friends since 1980. We’ve been in countless bands together, and he played on all four of my Kottak solo albums. We’re friends, and that’s what makes it special. Danny and Johnny have been friends since the early ’80s. When you put the four of us together, we all get along, and we’ve all stayed in touch over the years. Music is super important and all that, but if you’re not friends and you’re playing music, it doesn’t always work. That had a lot to do with the first and second [Kingdom Come] albums. We all jelled like crazy, and we still do.

You have a new member of the family on this tour. What makes Keith the right frontman for Kingdom Come in 2018?

He’s totally awesome, and he looks cool. Me and Rick had a band called Wild Horses, and we auditioned 50-60 singers here in LA. The one I wanted was Keith St. John, because he came in and had a cool vibe and everything. We’ve been friends over the years. Unfortunately, I didn’t get the vote; the other guys wanted to go with somebody else, and the producer had a say in it. We didn’t get to do that, but over the years, he and I have had a kindred bond because he was the singer for Montrose for over 10 years and I played on the Montrose Mean album.

Obviously, Lenny’s not involved in this current incarnation. I do know there have been some positive statements made on his behalf online wishing you guys well. For the benefit of those fans who have that initial question of where he is, where does Lenny stand with you guys? What’s the current relationship like?

We have an understanding, and everything’s cool. He got sick of it, and he’s kind of had some bad breaks in the business. It’s a sucky business; it’s terrible. We talked from last September through Christmas. In January, he called and said, ‘You know what? I just don’t want to do it.’ He announced a year ago that he was retiring and putting Kingdom Come away. I was going, ‘Come on, dude. Just one last hurrah, at least for a year.’ When Lenny says he’s made up his mind, that’s it; there’s no talking him out of it. We’re still friends; everything’s great. It’s just that he doesn’t want to go through all of this madness again.

Where does Kingdom Come go from here? What are the band’s future plans beyond this tour?

We’re not getting too far ahead of ourselves. We’re using this as a launching pad; we’re going to get the vibe and see what our friends, family and fans and everybody out there says as feedback. But I know so far from doing interviews with guys like you that the reception has been wonderful. I have no idea; we’ll take it from there. If you plan too far ahead, you don’t live in the now and you end up screwing now up. Now is all we have today. There’s a million ideas floating between the band, journalists and fans online. We’ll get to that next and see what happens.

What happened after In Your Face that resulted in that version of the band not moving on to a third album?

It was a combination of things. It kind of just imploded. It’s hard to describe, because bands work in mysterious ways. But I had been working on Wild Horses just for a side project. Then, all of a sudden, I got a record deal with Atlantic. Things were not really kosher with the [Kingdom Come] situation. The manager was having some problems, and it was just a combination of things. I said, ‘You know what? I’ll go with this Wild Horses thing.’ Also, I had a gig with Alice Cooper for a few days, which was wonderful because I love Alice Cooper. He was auditioning guys, but I went with that Atlantic deal and Wild Horses came to be.

To your credit, you’ve been very open with discussing your efforts with sobriety. How are things going for you right now?

I’ve struggled off and on for years. It’s not like I was falling down drunk; it was just steady drinking. That’s all I knew for the last 35 years. Then, it stops working when you get to be a certain age. I stopped for a couple of years around 2010 and started up again. Then, I stopped for another year and started up again. I trekked down to Antigua at Eric Clapton’s Crossroads in April 2016. I stayed there for like 90 days. It was incredible, awesome and educational. With sobriety, you have to be honest. I made it about 11 months, then I had about a week or two where I really screwed up. The whole time, I was hitting AA meetings. For anybody out there who knows anything about AA, it’s not an evil cult. It’s so awesome; it’s a lifestyle more than anything. Once you’ve gone to meetings, you have so much guilt if you start drinking that you don’t wanna. It’s really hard to explain unless you’ve been through it, but those out there who have know what I’m talking about. I don’t preach it to anybody; I don’t say, ‘Hey, man. You should go to AA.’ That doesn’t work; you have to want to go.

That’s kind of where I am right now. I’m feeling great; I’ve really taken care of myself over the years. Being a drummer, you have to. I think that’s why I’m ready to go. Things are good.

I talk with a lot of musicians who are beginning to get sober or who have been sober but have gone back and forth for many years. For those people in this business who are starting at the beginning, what words would you offer to help them avoid the pitfalls if they have a major tour coming up while being sober for the first time?

Go to AA meetings – they’re everywhere – and get a sponsor. A sponsor is somebody who checks in with you every day. If they’re somebody who’s been sober 10 years, they know the ins and outs. I would start there, because AA doesn’t cost anything, but you do have to give back and be of service to other people. That’s super important. Again, I’m not preaching. You don’t have to go, but it works for me and I’m enjoying it.

You know, family is affected so much by this disease. It’s not your fault; you’re just born with this gene. Some people aren’t, but they’re still alcoholics because they want to be. None of us really drink in Kingdom Come, and that’s a great thing. You have to surround yourself with positive people. If you’re used to hanging out in a bar being around a bunch of drunks or you play every Friday or Saturday someplace, maybe you have to take a break and not do that. I’m not really good at giving advice about stuff. I can only talk about my experience, but that worked for me.

You were doing things in the industry long before Kingdom Come, and you’ve certainly done a lot since the band’s original run, including having a great career with The Scorpions. You’ve been around a long time. What was the biggest lesson you’ve learned about the music business since the first Kingdom Come album that you’re applying to your work with the band now?

You have to be willing to do a lot of work on your own. We work as a group, and then of course we have a manager, a lawyer, an agent and all that stuff. But that only goes so far. You really have to learn the business. It’s like with Gene Simmons – what an incredible businessman! He’s one businessman who’s been totally active with KISS and has taken it to a much bigger level. Whether you like the guy or not, I don’t care. I love Gene Simmons. He’s just a smart businessman and a really smart guy and very nice. I would say get everything up and running, get your music together, do everything you can possibly do on your own and then start seeking out big-time management or this or that. Or if you’re really good like a Greta Van Fleet, look what happens – people come to you.

Your career has spanned decades at this point, which is rare in this business. You’ve worked with big acts and have been able to maintain that. Since you’ve been through it and are still in it and thriving and doing cool stuff, what has been the key to longevity and surviving in this insane business we’re talking about?

Work. You have to get up and do the work. You have to show up on time. I’m not perfect; I’ve been late for many things, but you have to be willing to work. A lot of times, what happens with many bands is they put out an album, go on tour, put out another album, go on tour and they’re pretty successful. They’re coming up and blah blah blah, but then they get lazy because they’ve made a little bit of money after being broke for the previous five years. You have to continue, and you’ve got to love it. Like I said earlier, you’ve got to work with friends. They can’t always be your best friends, but it makes life much more enjoyable when you have to go to a restaurant and sit with these people not once or twice but maybe thousands of times.

That’s the the key to The Scorpions. Everybody goes, ‘What’s the key to longevity?’ [Scorpions guitarist] Rudolf Schenker’s answer was always, ‘Friendship and love of Rock ‘N’ Roll.’ It’s so true. I just went and saw Scorpions about a week ago here in LA, and they sounded phenomenal. [Singer] Klaus [Meine] was killing it, and I got to hang with the boys and say hi to all the crew guys; I’ve been friends with some of those guys for twentysomething years. That’s the good part of Rock ‘N’ Roll, then you’ve got the bad part. I tend to be a glass-full kind of a guy – no pun intended! (laughs) That’s the most important thing. If you’ve got to go to a rehearsal five days a week and do two months of shows with somebody you think is an asshole, then quit. It will never work.