"The Hunt for White Christ:" A Conversation with Johnny Hedlund of Unleashed


Johnny Hedlund is smarter than the average bear.

As bassist/vocalist for long-running Swedish Death Metal legends Unleashed, Hedlund has consistently brought a touch of intelligence and esoterica to the genre. The band’s latest album, The Hunt For White Christ, is the fourth Unleashed release to follow The World of Odalheim, a Hedlund-authored story exploring the past, present and what he views as the future of the Viking traditions and values. It’s an intense listen and clear proof that there’s much more driving the Unleashed machine than death growls and blistering riffs.

There’s a hell of a lot to unbox with The Hunt For White Christ, but I give this task a go in the following interview with one of Death Metal’s most fascinating minds.

The Hunt For White Christ is a fairly provocative title for those who might not be aware of its origins. For the benefit of those people who might be introduced to Unleashed for the first time through this album, please share a bit about the inspiration for this title and how it plays into the overall themes of the album and the story you’ve constructed for it.

Okay, so to literally make a long story short, then…The World of Odalheim is a book me and a friend started working on some 10 years ago but never got the time to finish. Parenthood and other things got in the way, and time really wasn’t on my side anymore. I figured it made sense to try making chapters into songs, so to speak – or at least as close as possible. And since much of the inspiration to the storyline already came from Unleashed lyrics anyway, it was only fair to give it a try.

The story line of Odalheim from the start has its origin in the days we live in now. In a very troubled time of chaos and disorder. As the Fimbulwinter closes in – okay, literally three years of cold and darkness – the worldwide kindred of the Midgard Warriors prepared for the worst. Those who did not, however, would not survive the coming of Ragnarök - the end of the world as we know it. But those who knew what would come and prepared for it came through and stood the test of time. And they could start anew as the new world began to rise from the ashes of the old. We call this new world Odalheim. The main enemy of the Midgard Warriors is White Christ. Before the collapse of the old world, various religious believers banded together –  such as the Judeo-Christian believers, but also others. They are now the armies of White Christ. It is said in the Viking doctrines that 'White' in this context mean something like ‘cowardly’ as opposed to 'red Thor,' which would mean something like 'brave Thor.'

The new album is being released by Napalm, and Unleashed have changed labels a few times over the years. What makes Napalm the right home for Unleashed and what you’re aiming to achieve with this newest release?

We decided it was time for a change - and in many ways, not just the record label side of things. We are still good friends with Nuclear Blast and their crew. I won’t go into the exact details, but it felt right in this time of our lives to move on. We now have a very good feeling at Napalm, and we feel it was the right thing to do. I expect things to move on professionally and in a good spirit with all things Unleashed. 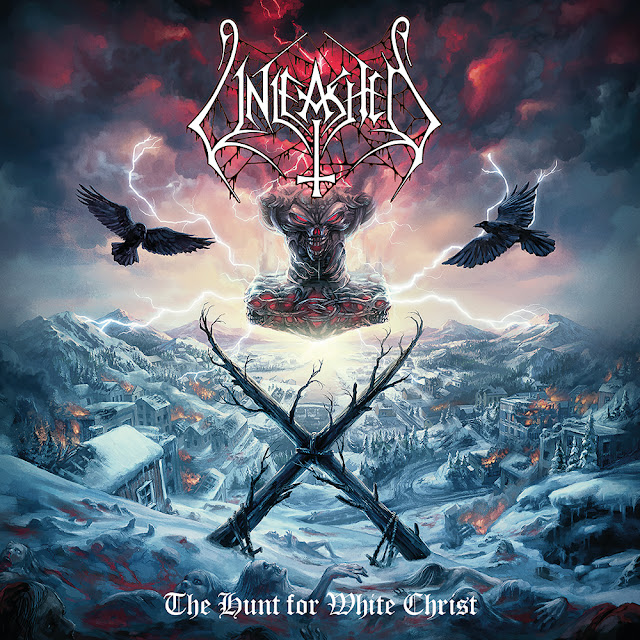 When comparing The Hunt For White Christ to your first album, Where No Life Dwells (1991), how would you say Unleashed has evolved over the years in terms of both your musical output and what you’re conveying in your lyrics?

First off, I’d say musically it is only fair to say we have developed quite a bit in almost 30 years now since the start. And who wouldn’t? It is a long time to keep to the roots yet try to develop things within your own style, so to speak. But I think we have done what we said we’d do way back then when we formed in 1989. The techniques and engineers have improved and so have we as musicians, of course. Just looking inside our studio today compared to the one we rented on the first three-song demo way back in 1990…Oh well, day and night, right? And hopefully, it is the same with our lyrics. I know my English has improved quite a bit, so I am naturally better at doing lyrics only considering the linguistic aspect of things. You might argue there is still work to be done there…True. I am a Swede, and I learn all the time. My native tongue is Swedish, so it is only natural.

Anyhow, I think our content has improved as well since the first album. At least I’d like to think I have improved that, too, but that is for others to judge, of course. But I am well aware of the fact that the new storyline of Odalheim has drawn influence from past albums, but it is still not something I could have done back in, let’s say, 1993 or so.

Being a recording and touring act in 2018 is not an easy task, especially for a band that performs extreme music. How has your professional experience as a finance director helped Unleash move forward in a very difficult industry?

Well, I’d say we wouldn’t be doing this without it. I think the word I am looking for here is ‘bankruptcy’ or ‘financial exhaustion.’ That is what happens if you use private money for your business and never see any returns on your investment. We experienced this in 1997, as we went home after years of touring worn out – the gear was broken down, with no money at all due to a shitty record deal. So, we took some time off to educate ourselves in finance, took day time jobs to buy new gear and got together and created a plan on how to move on. Tactical and strategical plans that would make us last. And we follow them to this day.

Sweden is similar to Birmingham, England in terms of serving as a breeding ground for a lot of great Metal over the years. What part do you think Swedish culture played in the creation of Unleashed and the other extreme music groups that grew from there in the late ’80s?

Oh, you are out on deep water here. (laughs) But I can only answer for myself and Unleashed. Okay, I could do a podcast on this topic. In fact, I have thought on doing it, really. Now, I will keep this short, but indeed there are many factors playing a role in the culture and the life we lived in Sweden at the time - well, and still do, for that matter.

Sweden, just like most countries in the West, is built upon the law and rule of the Judeo-Christian thoughts and beliefs. Now, if that religion and way of doing things had a continuing development towards the needs of man – and much else that happens in a modern world – we would likely not feel there was so much we needed to change in our society. However, this was not the case, and still isn’t. In fact, it is going in the absolute opposite direction, as I see it. Christianity never wrote the ‘modern testament’ or the like. They just kept to the roots without developing, and that is of course the same with many religions in the world today. I think there was a reason for why our ancestors, the Vikings, never wrote a holy book or the like. I think they realized that times will change – and man will, too. Even though our needs and aims in life will be the same. Society and the presuppositions for life on the planet will change by the years and decades – and well, nowadays, more rapidly than ever before, I suppose. It is still the same virtues we need to possess to be able to orient ourselves in a world of suffering. We need a set of rules or guidelines and an aim in life to be able to move forward and to stand up straight and fight back in the battle of life. We know that there will be black clouds on the horizon sooner or later. And so we have to prepare for that – and early on in life. But what is most important is to keep telling the stories of old but also to be able to change – and know what needs to be changed – so that we can adopt to the new times and new horrors that will come our way. The old religions can’t do this, and Hell knows they never even tried. Again, they keep preaching the same old, same old. And so, to make a long story short, this isn’t something the religious politicians in my country wanted you to think about way back then. In fact, they will not allow things to grow in this direction at all, even to this day. In school, for example, the Viking era is mostly made fun of. Well, that’s easy to lie to children and make fun of their ancestral culture. Well, have it your way, I say! But we will remember who was on our side and who was not at the turn of the tide.

Our way, now, in a time before the “Dawn of the Nine,” is to build these nine virtues into the Warriors of the future so that they will stand strong when the Fimbulwinter comes. Our platform in the battle of life is the Viking traditions and values - regardless of if our society agrees or not. So, the question of a ‘Swedish culture’ that potentially had an impact or played a role in our way of creating music and lyrics back then, and now, feels a bit ambivalent to say the least. That is to say we had a roof over our heads and food on the table back in the day, and we still do here in the north. But a quick look at the Maslow’s hierarchy of needs, just to exemplify, you can perhaps understand we aren’t at the top as individuals after all the years of Christian rule. We are down at a level of defending personal safety again, among other things.

Unleashed will reach its 30th anniversary next year. What has been the biggest key to the band’s ability to thrive for this long?

I will say there are many things that have to work over time, of course, but we always had a good, solid plan for how to do things. Well, perhaps not always, but we kept to the roots and kept developing. We also agreed on helping out within the band so that all members share responsibility for the band. And what is of course key is to be passionate about the music and lyrics and also the live show. Death Metal is live music, and you need to really enjoy this or you should stay at home. Having a really good friendship among the band member is also really helpful, or it will become too much of a job. And in the music industry, you can’t really sit around and count your dollars all the time. It will kill you for sure.