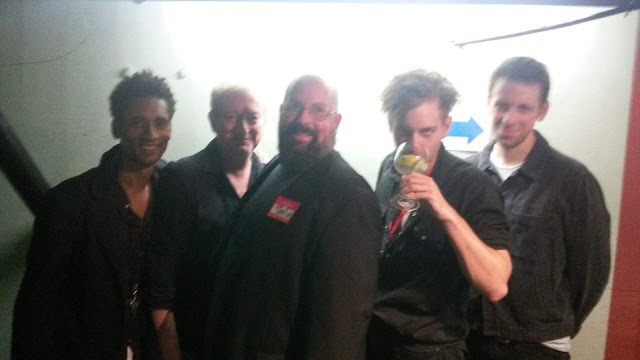 I’ve written thousands of words on Andy Gill over the years, but this is one piece I never wanted to do.

Time stood still for me yesterday when I read the announcement posted by his band, Gang of Four, that he had left us. History will remember him as one of the most innovative guitarists of our time, but he was much more than that to me.

A much as I love Jon King as a singer and frontman, I’ve always connected most with the Gang of Four material that featured Andy at the mic. For me, his deadpan delivery often spoke to the disconnection we all feel at times as we struggle to find meaning in the madness surrounding us. When I first heard his turn on vocals on 1982’s “We Live as We Dream, Alone,” it felt like he had just summed up the universe:

We live as we dream, alone
To crack the shell, we mix with the others
Some flirt with fascism
Some lie in the arms of lovers…

Man and woman need to work
It helps us define ourselves
We were not born in isolation
But sometimes, it seems that way.

For many diehard Gang of Four fans, the band began to rapidly lose its fire once the original lineup ceased operations following 1981’s Solid Gold. I’ve always considered this an unfortunate misconception, as the group’s subsequent albums – with Andy increasingly at the helm – offered even greater insight into the guitarist’s take on the world. The lyrical content on the tragically overlooked 1995 album Shrinkwrapped is among Andy’s finest output, with the man reaching new heights in describing a person’s emotional lows with the track “Unburden.” If you read the first story in my forthcoming book while listening to that number, it will be obvious how much his work has informed and inspired my own.

In 2015, Gang of Four – with Andy as the sole remaining original member – released the album What Happens Next. While many scoffed at the idea of a King-less record (while at the same time dismissing the effort as “Gang of One”), those who gave it a chance heard what is perhaps Andy’s most exquisite – and heartbreaking – creative moment. With German singer Herbert Grönemeyer delivering the mournful guest vocals, “The Dying Rays” still guts me every time I hear it:

What I wanted
Disappears in the haze
A speck of dust
Held forever in the dying rays.

Breath on the mirror, nothing in sight
The horizon's bare, but in the night
I missed the pilots' light.

Control and power
Empires were built in our minds
But it will all go up in a blaze
Only dust
In the dying rays.

“It's very much written from the heart,” Andy once told me. “It's not a young man's song, let's put it that way. I think with a little bit of experience and a certain amount of looking in the rearview mirror, you have some ideas about time, wasted time and things like that…I was in this Elizabethan house, [a] hotel in England. The sun was going down, and I was sitting in the chair and doing nothing, staring off in the middle distance. I just saw this speck of dust coming down in front of my eyes. It mesmerized me; I was hypnotized like a cat. [Those were] the first words...the 'speck of dust' thing. Everything came from that.”

The older I get, the more I refer back to this song. In 2017, as I found myself newly in my forties and heading towards divorce, I connected with “The Dying Rays” in ways that eased my pain. And when my most recent relationship ended late last year, it was the first song I played. What began as a speck of dust for Andy has become an irreplaceable lifeline for me when I’ve needed one the most.

My personal dealings with Andy were interesting, to say the least. When I received a promo copy of What Happens Next, I dissecting that thing for days. I enjoyed it immensely, but it was far from a perfect Gang of Four album – and I made my misgivings known in a review on my website. A few days later, I received an email from Gang of Four’s publicist saying the Andy really liked “how well thought out and fair” my review was and that a phone interview could be arranged so he and I could discuss the album one on one. Naturally, I jumped at the offer.

Andy and I soon had a lovely chat, and of course my review came up in that conversation. The impression he gave me was that he cared very little about whether a review was positive or negative; he seemed most interested in knowing whether a listener had seriously thought about what he was presenting in his work. As we were wrapping up, I mentioned that I intended to include a chapter on Gang of Four’s 1982 album, Songs of the Free, in a book I’ve been working on in dribs and drabs since 2005 called Albums that (Should’ve) Changed the World. He immediately offered to assist me in putting that together, and we agreed to stay in touch moving forward.

So, how did I reciprocate Andy’s graciousness and openness towards my criticisms of his new album? By potentially shitting all over my newfound connection with an artist I deeply admired, of course. When the band hit the Paradise Rock Club in Boston a few weeks later, I was invited to review the gig. Frankly, the show largely sucked; I didn’t think the new lineup cut it. I ended up skewering Andy’s new Gang of Four on my site the following day. (“If any other band on the planet delivered a gig like this, they would receive a more favorable review,” I wrote. “But this is fucking Gang of Four; this stuff really matters. I respect Gill enough to give his work an honest review, for better or for worse.”) Sure, I was proud of myself for keeping it real, but I began to strongly doubt that Andy would ever want to speak to me again.

About 18 months later, I got another email from the band’s publicist, this time inviting me to attend another gig at the Paradise. The email came with an additional message: “Andy would love to say hello.” Uh oh. Surely, I couldn’t face the guy after that last review. And what if I found his version of Gang of Four mediocre again? I went to the gig anyway.

I’m glad I did, because they absolutely blew my goddamn mind that night. Fucking incredible. The band on stage that evening WAS Gang of Four. Andy had been right all along, and I had been a schmuck for ever doubting him.

After the gig, the band’s manager brought me backstage. I was unsure of how my presence would be received. Fortunately, Andy was simply wonderful. He was in a jovial mood, greeting me with a wide and enthusiastic smile as he playfully joked around with his bandmates – all of whom were equally warm and hospitable. It was clear that he didn’t hold my negative words about the band against me.

“You’ve taken a lot of hits on my website, Andy, but I stand before you tonight to look you in the eyes and eat my words.”

I told him how much I loved the show and how impressed I was with what the other members delivered. He was glued to my every word, intensely nodding and clearly considering everything I had to say. I don’t think that had anything to do with the fact I was being complimentary; I think it was because I was giving his efforts my time and genuine thoughts.

I have no delusions about my place in this world. At best, I’m a semi-successful cult musician and a music fan with a Blogger account. Andy’s career would have gone on just fine without my opinions, but he made me feel that my reactions – even when they were far from rosy – were of tremendous value to him. I will forever respect and appreciate that.

Photos were taken and laughs were shared, and Andy reiterated his commitment to participating in my Albums book. Then, life went on as it always does. My focus drifted towards more pressing matters, and the Albums project continued to sit on the back burner.

The last time I heard from Andy was in March 2018 when he sent me a quick “hey Joel - how’s it going?” on Messenger. His timing was impeccable; I had just written a piece for my website on the then-new Gang of Four track, “Lucky.” I shot him the link, which soon appeared on the band’s official Facebook page – thus demonstrating a level of reciprocity between band and press that is sadly lacking in most corners of the music business. I had hoped for more connections with him from that point, but life and schedules again took us in different directions. I thought I had time. I was wrong.

Andy gave us much to listen to and ponder in his 64 years. Solace can be found in the fact that people will be discovering Gang of Four’s music for years to come. They will dance. They will sweat. They will read those lyrics. They will think. Most of all, they will find comfort in knowing they are not as alone in their living and dreaming as they once believed.

Farewell and thank you, dear man. You mattered. So much.

More on Andy Gill/Gang of Four on this site