REVIEW - Gang of Four: This Heaven Gives Me Migraine 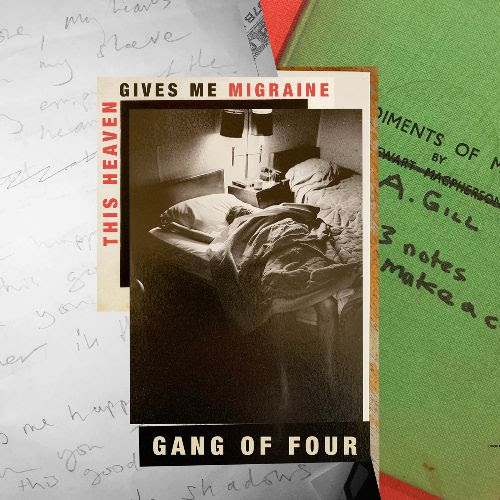 Listening to This Heaven Gives Me Migraine, the upcoming five-track EP by Gang of Four, is simultaneously exciting and devastating.

Regular readers of this website know that anything released under the “Gang of Four” banner gets my immediate and enthusiastic attention. It has been a habit of mine to deeply dissect the band’s releases and/or area live performances as soon as possible, thus making them one of my most-covered acts. While not everything I’ve written on the Andy Gill-led version of the group over the years has been favorable, every syllable I’ve delivered has been the honest reflection of a longtime fan who truly and deeply cares about everything this band does.

That part still stings like hell. Twelve days ago, I spent an afternoon composing my tribute to Andy, who passed away on February 1 at 64. I won’t repeat what I wrote, as it was difficult enough for me the first time. However, I will say that I’m far from over this loss. Selfishly, I spent the days following my post mourning the fact that I would never again get an opportunity to hear where Andy’s mind might have taken us next. He was always searching, always retooling, always striving to say things with a bravery and insight that many of us could only dream of possessing. It was tragic to think that work as brilliant as Andy’s would cease to be when it so clearly wasn’t time for it to stop.

Fortunately – and quite surprisingly – there was more coming.

Today, the surviving members of Gang of Four announced the February 26 release of this new – and very likely final – EP. The digital-only release contains three songs – which Andy had been working on mere days before he died – bookended by brief clips of him speaking. According to the band, it was Andy’s desire to create a project that “revisits and re-imagines his musical legacy.”

“From the hospital, Andy continued to give final notes on mixes of music that he looked forward to releasing,” shares Andy’s widow, Catherine Mayer. “Since his death, I have been working with the band to fulfill his vision. The only change we have made is to include on the EP two brief recordings of Andy speaking, both, in different ways, essence of Andy.”

“This collection of songs was recorded just before Andy died, and it was his intention to get these out – to represent the way we played them on tour, late last year,” adds John “Gaoler” Sterry, who had fronted Gang of Four since the departure of original vocalist Jon King in 2012. “All three songs were recorded in Andy’s home studio in London, and there’s a fly-on-the-wall intimacy to this EP – from the song selection to the snippets of spoken word.”

Considering the posthumous nature of this release, it is quite appropriate – and heartbreaking – that This Heaven Gives Me Migraine (a reference to a lyric from 1979’s “Natural’s Not in It”) would feature a re-worked version of 2015’s “The Dying Rays.” As previously discussed on this site, the track is one of Andy’s greatest songwriting victories and a prime example of his many gifts as a lyricist. In the original version, guest singer Herbert Grönemeyer perfectly personifies the quiet sorrow that hits many of us as we age and begin to contemplate our mortality. In this new incarnation, Gaoler breathes a new perspective into the existing words. While Grönemeyer’s performance embodied the ravages of time and regret, Gaoler’s take resembles a young man – and a world of fans and admirers – who got to experience the world under the tutelage of a world-renowned mentor, only to see that magic come to an abrupt and sad end:

Control and power
Empires were built in our minds
But it will all go up in a blaze
Only dust
In the dying rays.

One quibble I expressed in my review of 2015’s What Happens Next was that Andy had largely overlooked Gaoler’s gifts as a vocalist in favor of filling a fair amount of the album with guest performers. This version of “The Dying Rays” corrects that misstep and provides Gaoler a further opportunity to thrive in a well-earned spotlight.

The EP’s second song is a version of “Natural’s Not in It” recorded late last year by the band’s final lineup. While most diehard Gang of Four fans will understandably favor the original version off the Entertainment! album, this new rendition brilliantly showcases what the live Gaoler-fronted lineup – which had impressively grown from disappointingly pedestrian to absolutely fucking scorching in the span of about 18 months – was all about. This energy carries into a loose recording of “Toreador,” which slays the original version off last year’s Happy Now thanks in large part to a ton of added oomph in the drumming department. As for the spoken pieces, I won’t spoil their content except to say that it was nice hearing Andy’s voice again today.

Does This Heaven Gives Me Migraine serve as a fitting sonic epitaph for Andy Gill? No, but nothing would ever succeed as an adequate final statement from someone whose career was devoted to forward motion. That said, this EP demonstrates that Andy – revolutionary and irreplaceable – was still working and exploring right up to the end.

For that alone, the man left on a high note.

More on Andy Gill/Gang of Four on this site