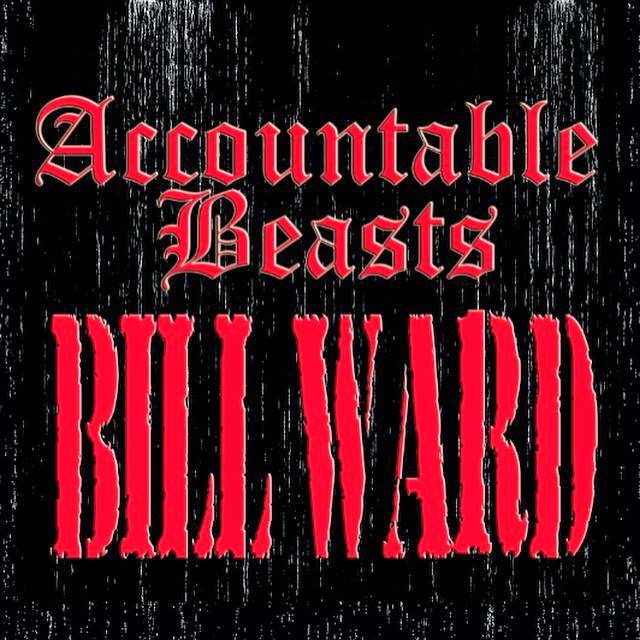 Earlier today, my recent feature on Bill Ward saw an unexpected postscript when I was received word that Accountable Beasts, Ward's first solo album in 18 years, quietly appeared on iTunes last night for the world to purchase and experience. This jaw-dropping announcement was clearly prompted by iTunes' surprisingly swift processing and posting of the album, a process that (as explained in my interview with Bill) was originally expected to take a couple of months. No matter when and how Accountable Beasts' arrival on computers and in earbuds around the world actually came to be, the important thing is that the album is finally here.
Here are some thoughts at first listen:
It takes only the first 60 seconds of the album-opening “Leaf Killers” to inform us that Accountable Beasts (which features Ward handling lead vocals on all tracks) will be an intense ordeal. Chilling orchestration and operatic female vocals permeate the proceedings, giving listeners an aural haunted house tour more akin to Cradle of Filth than the mellower sounds featured on Ward's previous album, 1997's When The Bough Breaks. The power continues through the fiery, near-Industrial charge of the title track, while the menacingly mid-tempo “Katastrophic World” is the track on Accountable Beasts that most captures the spirit of classic Black Sabbath, thanks to Keith Lynch's heavy riffing and Ward's unmistakable drumming. The Metal power displayed on “Katastrophic World” reaches its zenith on the raging “Ashes,” which finds Ward's most incendiary solo album performance ever matched by some truly scorching work by longtime Bill Ward Band guitarist Lynch.
However, those expecting a full-on Metal assault throughout Accountable Beasts will instead encounter an album that mostly feels more like Sgt. Pepper's Lonely Hearts Club Band than Sabbath Bloody Sabbath. The experimental “First Day Back” mixes touches of Psychedelica and Funk to offer the album's most eclectic moment, while the keyboard-driven “D.O.T.H.” soars thanks to Ward's McCartneyesque vocals and the unforgettable female voices that accompany them. The Beatles feel can also be felt on the understated “As It Is In Heaven.”
Originally released in 2002 as a charity single, the urgent (and 9/11-inspired) “Straws” makes a return appearance on Accountable Beasts, offering a harrowing narrative of a man desperate to protect his family as war breaks out around them. ("How am I supposed to save you, in this chaos?/ Clinging, please don't die/ Where are the defenses we were promised?/ Oh, I hope that they've arrived.") The album concludes with the 10-minute epic ballad “The Wall Of Death,” another brilliant reminder of Ward's ability to step away from the confines of Metal and produce music of stunning beauty and depth.
Considering the media frenzy surrounding Ward and Sabbath lately, Accountable Beasts will surely receive more attention than any of his past solo endeavors. Thankfully, the album is strong enough to put the naysayers in their place and fascinating enough to encourage those new to Ward's previous non-Sabbath work to track down those extraordinary records and hear what they've been missing all these years.
It is quite possible that I'll post another review of Accountable Beasts in another six months or so once I've had some real time with it. As I've learned with Ward's previous albums, it's important to really study and listen to what he comes up with, as there is often much more going on with his solo work than meets the ear during the first – or 50th – listen. (Heck, I'm still examining and dissecting Ward One: Along The Way 20-plus years after buying it.) Taking in an album as intense and involved as Accountable Beasts in one sitting is a daunting – actually, an impossible – task. But exploring Accountable Beasts further is absolutely a journey worth taking, and I hope this quick review encourages you to join the ride.
Accountable Beasts is available on iTunes. More information is available at www.AstonCrossMusic.com and www.BillWard.com.
READ JOEL'S BIO
PURCHASE JOEL'S BOOKS
EMAIL JOEL at gaustenbooks@gmail.com
Posted by Joel Gausten