Living outside the Lines: A Chat with YOUTH

The master producer/remixer (Pink Floyd/The Orb/The Verve/Guns N' Roses), original Killing Joke bassist, Paul McCartney collaborator and countless other things is a pleasure to talk to because he's always involved in something interesting that could easily fill a feature. At the same time, truly keeping track of this moving target's various activities at any moment is an impossible task. Since it would take a year's worth of articles for me to properly sum up everything Youth had going on just at the time of our conversation in early January, this piece will focus on the fact the guy recently published his own coloring book.

A true psychedelic visual experience, The Anarchist Colouring Book offers dozens of original Youth illustrations. Although fans who have checked out his poetry books (including Kommune and Middle Class Riot) are already familiar with Youth's unique drawing style, the new book is the first publication devoted exclusively to his work in this medium.

“Last year or so, a few people had suggested strongly that I consider doing [my drawings] as a coloring book,” he explains. “I started to do some specifically for that, and collated and adapted some older ones that I thought might work well. I mentioned it to [Killing Joke frontman] Jaz Coleman, and he said, 'Yeah! That's a great idea! You should call it The Anarchist Colouring Book.' I was like, 'Yeah! That's brilliant.' It hadn't been a long-held ambition of mine to do a coloring book; I saw an opportunity to get my drawings out into a wider realm because the poetry books are so tiny in the appeal range.”

In addition to Youth's Bandcamp store, The Anarchist Colouring Book is available for purchase through The Idler and Rough Trade in London. Already sold out of its first edition of 300 and second edition of 350, the book is nearly through its current 300-copy third edition.

“It doesn't sound like a vast amount, but in publishing terms, in quite a lot of sales,” Youth says.

Those who buy The Anarchist Colouring Book are encouraged to color the drawings in and upload them to the project's Facebook page. So what has the feedback been like? Have people come to Youth with completely different interpretations of what he's drawn that make him look at these pieces in a completely different way?

“It's been really revealing, actually,” he answers. “[The drawings are] so ambiguous that they do facilitate many interpretations, which I always hope is the same with the music I make. It's ambiguous enough that everyone can make it their own personal thing, but specific enough to engage people into what it is or isn't. I think that's certainly been the case with the drawings. I've had some great explanations of what it is. To me, it's really just images from my life and things that go through my angle of perception – whether it's media, politics or fantasy. It's weird therapy as well, I think. What people tend to like about them is they're free; they go all over the place. They're quite abstract; they have a sort of superreal/surreal element to them as well. I think that’s what I'm doing when I'm making them; I'm trying to unbridle my consciousness into my subconscious and my environment and just have a fairly psychedelic roam around.”

In addition to experiencing the visuals between the pages, those who purchase The Anarchist Colouring Book on Bandcamp also receive an extraordinary eight-track ambient soundtrack. Was this accompanying music release created specifically for the book project, or was it comprised of material that Youth already had around?

“Okay...I'll come clean,” he replies with a chuckle. “Two days before we went live to publish [the book], I realized I didn’t have a soundtrack for it. When I put things up on Bandcamp, it's always on the premise of being part of the album. If you don't have the album, it's hard to put it up. I suddenly thought, 'Shit, I've got to get an album.' I went through some archive ambient stuff and outtakes of films and various bits that ended up nowhere and collaged some of those together and did a couple of new ones. Then I thought I could tie them together with some of the interviews I've done. I'm in the process of putting together a book of philosophy called Freak Philosophy based on various heads I've interviewed over the last 25, 30 years, from Chet Helms to Ken Kesey to Terence McKenna to Greg Sams. I recorded a lot of those interviews, so I just thought it would be appropriate on the Anarchist Colouring Book soundtrack to have just a couple of snippets of them from those interviews to tie in the tracks to the book...They're all really inspired and inspiring individuals to me; they've given me a good North Star to navigate to over the years. It's something I've been wanting to do to for a long time to promote and help raise people's appreciation and awareness of them a bit more. I put the whole album together out of all of that in two, three days. I like that; I think that's quite sort of Dada and anarchistic and spontaneous, which is part of the whole thing with the drawings as well. There are no corrections; it's all done very fluidly and quickly.”

One of the soundtrack's most fascinating songs, “The Return Of The Nabob On The 111Hz,” features the hypnotic voice of London-based performer Georgina Brett.

“She's great!” Youth says. “She uses these tape loops and pedals to create this weird sound on sound with mainly her vocals.”

The Anarchist Colouring Book is dedicated to Jazz Summers, Youth's longtime manager who passed away last August at 71.

“He's certainly the most important person I've ever met in music,” Youth shares. “When I first went to see Jazz, it was for him to help me find a singer for a new band I was going to put together. He told me who I was; he told me, 'What do you want to do that for?' I was like, 'Because I'm a songwriter; I'm a musician, You put a band together, you get a manager, you get a deal and da da da.' He said, 'No, you're not! You're a writer/ producer, the rarest cat in the jungle! What do you want to do?' I said, 'I want to get busy; I want to be in the studio all the time.' He's going, 'We'll get you busy!' His belief in me was far bigger than my belief in me. His experience, vision and ultra sort of cosmic laser penetrating eye was a real education for me. Having worked with him for so long, I'm pretty certain if I hadn't met Jazz, I wouldn't have had nearly such a successful career with music and production. I had been producing before I met him; I had done a production for The Danse Society, but I hadn't really taken myself fairly seriously as a producer until I met him. He encouraged and pushed me to places I wouldn't have considered going so easily. He was just so frequently right. I don't know how he knew what he knew because most of what he knew was unknowable, but he had the ability to know and predict things, and they would happen. He had a direct honesty, and he was an anarchist... He was old school; it's very hard to find cats like that today. They have the vision, dedication and determination to back it up, to carry the artist through and take them over the edge and get them on the international stage and doing the best work they've ever done. Without those cats, we would be nothing; we would be dust.”

The publication of The Anarchist Colouring Book coincided with the arrival of Pylon, Killing Joke's 15th studio album. The band's third release since reforming their original lineup in 2007, Pylon easily earned a place on more than a few Best of 2015 lists and showcased the group's heaviest work in years. 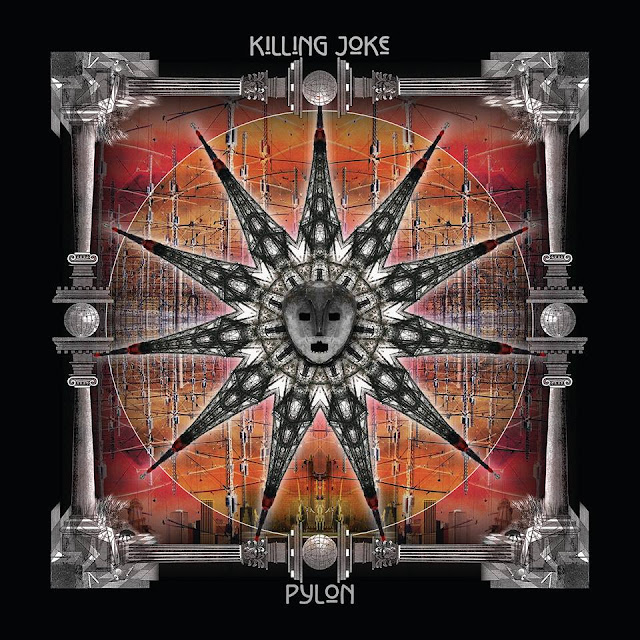 “Absolute Dissent [from 2010] was more of a regrouping and a self-reflection of our entire career,” Youth offers. “It felt a little bit like a compilation album, almost. MMXII [2012] was definitely more of an album album, but more synth-oriented and a little bit more progressive in that sense - but nevertheless with a couple of uptempo, euphoric ones. And then this one's a bit more guitar and - I don't really want to say it - but more Metal-influenced in some ways.

“I think we took a bit more time writing this one,” he continues. “With the previous two, we had to write and record in two-three weeks; it was boom, boom, boom. [With] this one, we kind of did it in Prague, which we could afford because the studio time was cheap. We spent more time coming back and doing more jams and really [cutting] down the 100 or 150 ideas to the 15 that ended up on there. I'll say some of the best cuts never made that top 15, as usual. It's a funny process with Killing Joke; it's never rational or logical, but it does come out the way it kind of should. I don't really argue with it or question it too much. It can be very frustrating at times, but I accept it because the rest in futile. (laughs)”

Not surprisingly, Youth already has a hefty workload planned for 2016. In addition to collaborating with original PiL bassist Jah Wobble and Hawkwind legend Nik Turner and releasing new titles on his Liquid Sound Design label, he is busy producing The Jesus And Mary Chain's first album in nearly 20 years. Although he is tight-lipped on specific details on the album (other than that it was in the mixing stage at the time of this interview), he is quick to express his respect for the veteran act.

“For me, working with that band confirms everything that excites me about working with music," he says. "They are so incredibly good at what they do and very modest and humble about it. They make ethereal, tieless, beautiful music with a lot of mystery to it. It's been a great honor and privilege working with them... I love the whole Punk Rock-meets-Phil Spector-meets-Velvet Underground aesthetic that they've always kind of rigidly adhered to and yet still manage to sound challenging, fresh and new.”

As far as what Killing Joke fans can look forward to in the months to come, here's some interesting news from their bassist: “We're going to be looking at a Killing Joke symphonic album next year [or] this year at some point.”

Beyond that, if you know anything about Youth's body of work, then you know to simply strap yourself in for the intriguing and ever-changing ride.

In the words of the man himself: “Who knows what can happen? Anything can happen. (laughs)”