The Gift Returns: A Rejuvenated Gang of Four Soars in Boston

The past couple of years have been an odd time to be a Gang of Four fan.

Twelve years ago, the band's original members – singer Jon King, guitarist Andy Gill, bassist Dave Allen and drummer Hugo Burnham – reconvened for the first time since 1981’s Solid Gold for extensive touring that included an unforgettable set at Coachella 2005. For a brief moment, Gang of Four – an absolutely brilliant group responsible for some of the most intriguing Post-Punk albums released from 1979 to 1983 (and again in ’91 and ’95)  – were the most deservedly celebrated old school band playing in the modern context. Unfortunately, the party didn't last long.

The first sign of trouble came when Burnham was replaced by a session player for Return The Gift, a 2005 collection of re-recorded classics that rarely touched the magic of the original versions. By the time the band released all-new music in the form of 2011’s Content, only King and Gill remained. King retired from Gang of Four following the tour in support of that album, leaving Gill to either thrown in the towel or bring a decades-old band into an uncertain future. He chose the latter, adding singer John “Gaoler” Sterry to a new incarnation of Gang of Four that also featured Content bassist Thomas McNeice and Content/Return The Gift drummer Mark Heaney (soon replaced by timekeeper Jonny Finnegan). In an interview on this website last year, Gill shed light on his decision to carry on under the Gang of Four moniker:

To me, it very much felt like, 'Okay, so we got Gang of Four. We're doing Content, Jon decides to go his own way, so it's Gang of Four less Jon King.' Now, you might be of the mind to believe that means that Jon King is so integral to Gang of Four that it's no longer Gang of Four without Jon. But in my experience, nobody's really said that. I think most people feel that I've always been the producer, musical director, writer of the music and half the lyrics, so it's Gang of Four. I think the question would be, '[When] you listen to this album, do you hear the DNA of Gang of Four, or not?”

The album referenced above, 2015’s What Happens Next (review HERE), had an equal share of peaks and valleys. At its brightest, What Happens Next delivered the best song of the year; at its worst, the album played like a sterile vanity project from a producer toying with guest singers at the expense of making his version of Gang of Four sound and feel like an actual band. The issues that weakened What Happens Next were also felt when the “Gaoler”-fronted incarnation of Gang of Four hit the road, with their March 2015 appearance at the Paradise Rock Club in Boston (review HERE) falling short of expectations in more than a few spots. Gang of Four is an important band to me, and I respect Gill way too much to sugarcoat anything I have to say about his output. As a result, he took a few hits on this website last year - but the time has come for me to eat some of those words.

Whether I was listening to What Happens Next at home or seeing the band on stage in Boston, what bothered me about Gang of Four circa 2015 (despite some very bright spots here and there) was that they didn’t convince me that they meant it, maaaan. Sure, the band was tight and competent, but everything felt unsure and tentative, as if the newer members knew the songs but had yet to understand and fully embrace the music’s spirit. It was good, but it just wasn’t Gang of Four.

What a difference a year can make.

On October 5, Gang of Four (now with powerhouse Pleasure Complex drummer Tobias Humble keeping the beat) returned to the Paradise stage, this time as part of a co-headlining tour with The Faint. While it was clear that The Faint were the evening’s main attraction (as illustrated by Go4’s early showtime and absence from the venue’s marquee – odd sights considering that they were full headliners only a year ago), Gang of Four proved to the crowd that there was plenty of life and fight left in them.

While their previous Massachusetts gig revealed a new band working out plenty of kinks, this night demonstrated a looseness, energy and vibe that can only come from a combination of musicians strengthened by miles shared on the road. There were moments throughout their set (a brilliant “To Hell With Poverty” comes to mind) that flawlessly matched the fire of the original band’s ’05 Coachella set, while “Gaoler” finally fulfilled his potential with an energized, driven stage presence that commanded the audience’s attention. No longer is he the listless newbie of the March 2015 show; now, the man possesses the onstage charisma necessary to match his vocal talents. He’s not just King’s replacement; he is now the rightful frontman of Gang of Four. McNeice, stone-faced and workmanlike at the 2015 show, came out of his shell this time around as he physically reacted to Humble’s stellar bounce behind the kit. Gill, as always, was the epitome of cool – effortlessly incinerating his guitar with both crude distortion and expert finesse while dressed like a college professor gone bad.

Interestingly, the band was at their best when tackling newer material, with the What Happens Next tracks “When The Nightingale Sings” and “Stranded” easily eclipsing Go4 staples like 1979’s “Damaged Goods” (which, to be honest, was played frustratingly slow for some reason). While some veteran acts half-heartedly drop new albums these days simply as an excuse to hit the road, Gang of Four are obviously pumped to play their latest creations. That was truly inspiring to see and hear.

As usual, an adrenalized rendition of the 1995 track “I Parade Myself” was a clear standout of the set, making one wonder what it would take for the band to finally add other tracks from the criminally overlooked Shrinkwrapped album to their current live set. (Note to Mr. Gill: The title track would absolutely shine with this lineup behind it.) 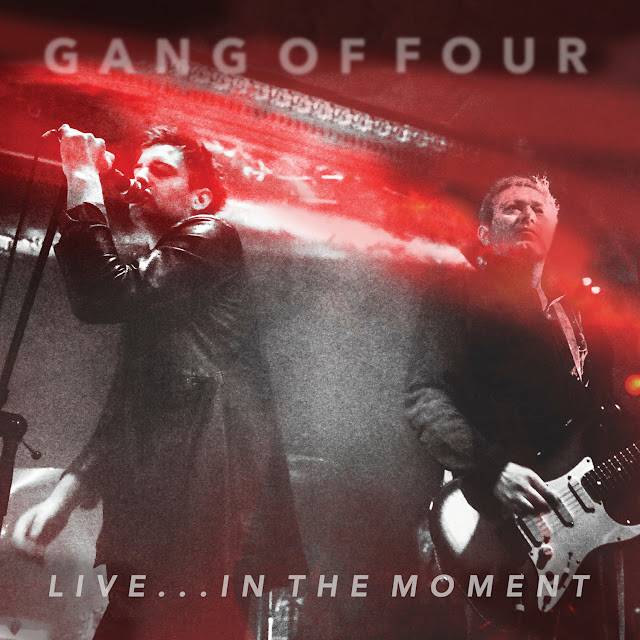 The restructured Gang of Four’s upward climb can also be felt on Live…In The Moment, a newly released recording of the band’s gig at London’s Islington Assembly Hall on November 6, 2015. Not surprisingly, the 14-song collection boasts many of the same strengths as the group’s recent Boston appearance, with all four members (including a pre-departure Finnegan) demonstrating just how far they had grown together in the eight months following their iffy night at the Paradise. (The disc’s rendition of Solid Gold’s “Paralysed” is particularly acidic.) The CD edition of the album comes with a DVD of the band playing at New York’s Irving Plaza on March 7, 2015 – the night after said Boston gig. As expected, the performance suffers from many of the same issues that hampered Gang of Four’s momentum during this period. Thankfully, the DVD’s close-ups and quick editing add some excitement to what is otherwise a band doing very little on stage. If you want to really experience today’s Gang of Four, leave the DVD in its case and go see the band in person as soon as possible. (Go HERE for dates.) After a shaky beginning, the Jon King-less Gang of Four is now a real – and utterly fantastic – band.

With Gill quickly approaching Gang of Four’s 40th anniversary in 2017, his current cohorts have grown into a solid unit with the ability to respectfully maintain the group’s well-earned reputation while hinting at an exciting future. Gill tells me that he’s halfway through writing the next Gang of Four album. If Live…In The Moment and last week’s show are any indication, the new material will meet – and perhaps even exceed – the high quality and expectations attached to Gang of Four since the original members first gathered in 1977. I can’t wait!