ALBUM REVIEW - Gang of Four: What Happens Next 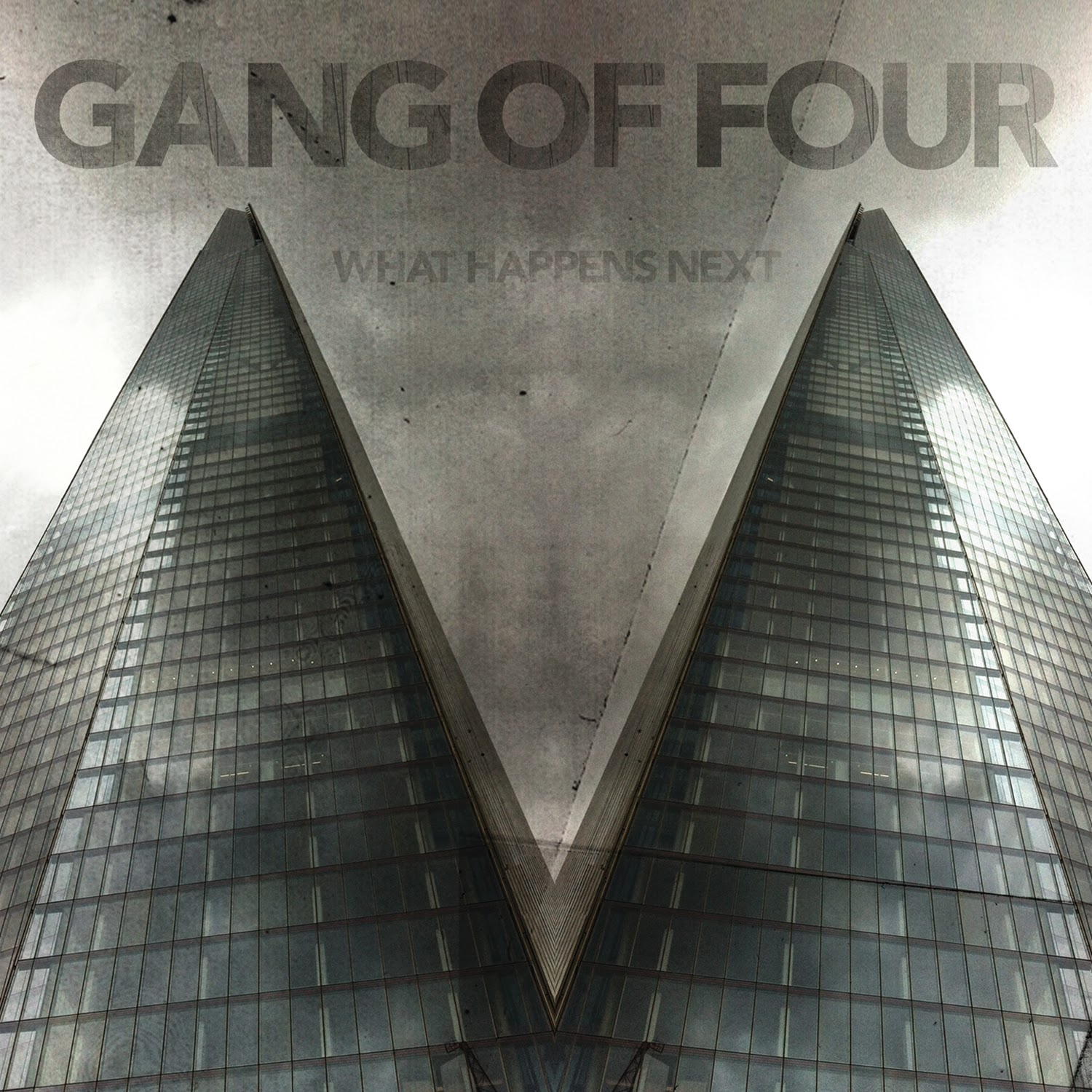 Say hello to Gang of One.

The ongoing saga that is Gang of Four is one of music history's most peculiar narratives. After creating two of the greatest albums ever released (1979's Entertainment! and 1981's Solid Gold), the band's beloved original lineup – singer Jon King, guitarist Andy Gill, bassist extraordinaire Dave Allen and drummer Hugo Burnham – began splitting at the seams. Allen was the first to go, while Burnham departed after 1982's Songs of the Free. King and Gill soldiered on with 1983's unjustly underrated Hard before completely running out of steam by the mid '80s. An unexpected '90s reunion between the duo yielded 1991's Mall and 1995's utterly perfect Shrinkwrapped before another separation took place. A decade later, the four original members reconvened for a number of well-received dates including an appearance at Coachella. The reunion was not without its problems, as the band shamefully replaced Burnham with a session player for Return The Gift, a so-so 2005 collection of re-recorded favorites. Both Burham and Allen were out of the picture entirely by the time Content reached listeners in 2011. King was soon gone as well, leaving Gill - a master producer with albums by Killing Joke, The Jesus Lizard and Michael Hutchence (among many others) to his credit - to either carry on or let the holes finally sink the ship. He chose to keep Gang of Four alive, and now we have the results of that decision in the form of the appropriately titled What Happens Next.

With Gill now in complete control of the proceedings, What Happen Next is clearly his vision of what a Gang of Four album should be. Of course, this means that he's the man solely responsible for the album's success or failure. The words “Gang of Four” have special meaning for a lot of people (this writer included), so anything the guy releases under that moniker damn well better deliver the goods. Thankfully, there are enough fantastic moments on What Happens Next to earn its place alongside the great works in the Gang of Four canon.

First off, let's calm the biggest concern surrounding this album. New singer John “Gaoler” Sterry does an exceptional job in King's shoes, delivering a vocal performance so close to the band's original mouthpiece that you likely wouldn't spot the difference if you heard these tracks without knowing of the personnel shakeup. (Gaoler's work on “Isle Of Dogs” and “First World Citizen” - two songs as instantly great as anything Gang of Four released during their first era – is especially impressive). There's no need to worry; the new guy passes the test with flying colors and has earned his place as the singer of Gang of Four.

Considering that he absolutely has the right singer in place, it's surprising that Gill brought in a slew of guest vocalists for What Happens Next. Although this is a very unexpected move for a Gang of Four album, the gamble pays off. After recently slaying listeners with her unforgettable appearance on James Williamson's Re-Licked, Alison Mosshart (The Kills/The Dead Weather) shows up to add her charm to “Broken Talk” and “England's In My Bones.” The Big Pink's Robbie Furze gets a turn at the mic on the drum-heavy “Graven Images,” while Mall-era Gang of Four bassist/longtime David Bowie band member Gail Ann Dorsey adds her voice to “First World Citizen.” All of these contributors bring something fresh and exciting to the table, expanding Gang of Four's musical vocabulary in the process. What Happens Next is more adventurous than this always-adventurous band has ever been on record before, and the results are often astounding.

Breath on the mirror, nothing in sight
The horizon's bare but in the night
I missed the pilots' light

Gill's tack-sharp lyrical prowess is on full display throughout What Happens Next, such as in this sample from “Broken Talk:”

Where does he come from?
He's got an itch that won't be scratched
Sometimes he guesses he might be wrong
Sometimes guesses that he don't belong

How unequivocally Gang of Four is that?

Naturally, Gill's trademark guitar playing on What Happens Next is as enjoyably jagged as ever. Like J Mascis, Killing Joke's Geordie Walker or late Voidoids guitarist Robert Quine, Gill only needs to hit one note to let the world know that it's him. It's always a treat to press “play” and hear the man through the speakers.

Although What Happens Next is full of bright spots, there are elements that don't work. A strangely subdued vibe penetrates the majority of the disc, leaving many of the songs to build up to a climax that never really comes. Even if this slow-burn effect was an intentional attempt to accentuate the general unease showcased in many of the album's lyrics, it leaves at least this longtime Gang of Four fan yearning for something that approximates the rush generated by the first 30 seconds of Entertainment!'s “At Home He's A Tourist” or the power of “It Is Not Enough” from Songs Of The Free. This issue is exacerbated by the fact that recent live videos reveal the current incarnation of Gang of Four to be a powerhouse on stage. Sadly, the bass/drum interplay on What Happens Next is simply serviceable, often failing to ignite that menacing Allen/Burnham spark that fueled early numbers like “If I Could Keep It For Myself” off Solid Gold. Gill has the players necessary to convincingly pull off Gang of Four in 2015; it's a pity that What Happens Next doesn't fully utilize their strengths. And while the aforementioned special guests add considerable magic to the package, their presence nonetheless makes What Happens Next feel more like the product of a brilliant producer than an album by a genuinely cohesive unit kicking ass. As wonderful as this album is, it doesn't feel like a band.

Quibbles aside, What Happens Next is a masterstroke of musical exploration from a man unafraid to take left turns nearly 40 years into his career. I can't wait to hear where Gill and his crew take these songs in a live setting.

What Happens Next is out February 24 on Metropolis Records.

Gang of Four plays the Paradise Rock Club in Boston on March 6.