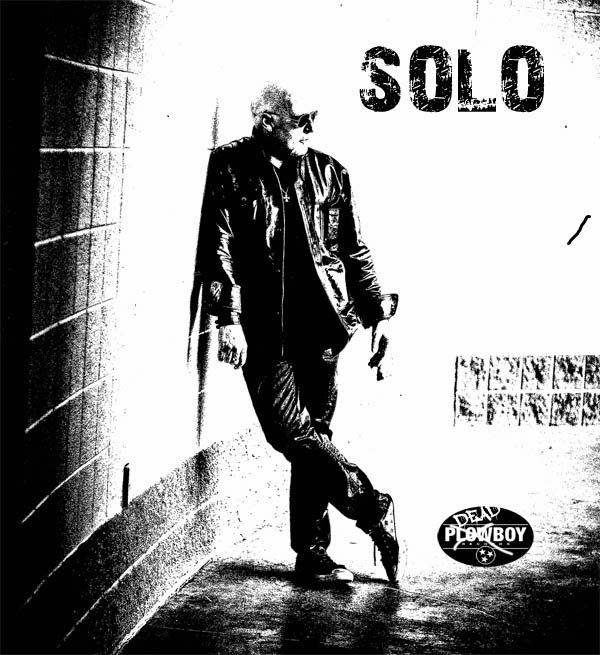 Picking up the phone in 2014 and hearing the laid-back, friendly voice of Cheetah Chrome on the other end is something truly special. Getting a chance to catch up with the guy is a treat not only because of his standing as one of the originators of American Punk (first with Cleveland’s Rocket From The Tombs, then with the mighty Dead Boys), but also because it’s a miracle that he’s even alive. Once one of the most reckless and self-destructive members of the original CBGB scene, a now-sober Chrome spends his time these days as a loving husband and father, record label owner and Nashville music producer. While many of his Punk comrades met early ends due to their behavior, Chrome came through the other side older, wiser and happy to still be able to move forward. That said, don’t believe for one second that today’s Cheetah Chrome has lost the ability to completely fucking ROCK.

Last October, he issued his first-ever solo EP (appropriately named Solo) on his own Plowboy Records. The seven-song collection is comprised of tracks recorded in 1996 with Dead Boys producer Genya Ravan (with late CBGB owner Hilly Kristal serving as executive producer) and a 2010 session in Nashville featuring New York Dolls guitarist Sylvain Sylvain (Chrome’s partner in the band The Batusis), drummer Lez Warner (The Cult) and bassist Sean Koos (Joan Jett and The Blackhearts). Although there is a 14-year gap between some of its material, Solo is truly timeless, straight-ahead Rock that easily stands alongside the very best in Chrome’s decades-spanning discography. Whether it’s the brilliant Surf edge of instrumental opener “Sharky” or Chrome’s gravelly voice on the bulletproof “Stare Into The Night,” Solo is Rock ‘N’ Roll the way it should be played. In 1977, Chrome helped introduce the world to New York Punk with the Dead Boys’ Young Loud And Snotty; with Solo, he’s still showing the rest of us how it’s done. It also helps that he has a drummer as solid as Lez Warner involved in the proceedings.

“I wanted to work with [Lez] for a while,” Chrome says. “When Sylvain and I did The Batusis, we did it with Joan Jett’s drummer Thommy Price and Enzo [Pennizotto], her bass player. When it came time for The Batusis to tour, they couldn’t do it [because] they were out with Joan. We needed to find some replacements real quick, and Lez was the first person I thought of. I always loved the way he drummed, and I’m really glad it happened because he’s just amazing. He was even better than I thought he was going to be. He’s one of those classic, good English drummers.”

Although Chrome has lived in Nashville since the late ’90s, his true involvement in the music and culture of that great city didn’t come as a result of playing area stages, but through the decidedly unRock ‘N’ Roll confines of a children’s birthday party. While attending the festivities with his young son, Chrome got talking with the father of one of the girls in his son’s class. Turns out that the dad was Shannon Pollard, grandson of Nashville music legend Eddy Arnold. The two immediately hit it off, and this chance meeting would soon propel Chrome into the next stage of his career.

“[Shannon and I] got to talking, and he said, ‘I’ve had an idea for a label for a couple of years, and I’d like to see if you’d be interested in doing it with me,’” Chrome says.

This led to the 2012 creation of Plowboy Records (with a third co-founder, Don Cusic) and the release of You Don’t Know Me: Rediscovering Eddy Arnold, a Chrome-produced collection of 19 artists performing Arnold songs that was unveiled in May 2013 to coincide with what would have been the singer’s 95th birthday. Unsurprisingly, Chrome has very fond memories of the experience.

“It was a really cool challenge,” he say. “[Shannon] really wanted to preserve his grandfather’s legacy and bring it to a new generation. He gave me the freedom to do anything I wanted to. I literally could have had Lou Reed do a Metal Machine Music version of any song on there, and he would have said that’s okay (laughs). I had a lot of freedom; it was great. And all of a sudden, I found myself up to my ass in the Nashville music business.”

You Don’t Know Me: Rediscovering Eddy Arnold featured an appearance from Chrome’s longtime friend Alejandro Escovedo, whose rendition of “It’s A Sin” is one of the album’s true highlights. Like Chrome, Escovedo has a Punk Rock past: Before becoming a successful and long-running Americana solo act, he was a key member in the original incarnation of San Francisco cult legends The Nuns and did a stint in Rank And File with Chip and Tony Kinman of The Dils.

Although Chrome and Escovedo are both calmer now than in their earlier days in the business, that doesn’t mean that their Punk spirit has diminished. Just consider how they looked when they went to the Americana Music Association (AMA) Awards together not too long ago.

“It was really funny because he wore a Nuns t-shirt and I wore a CBGB t-shirt!” says Chrome with a laugh. “We’re corrupting Americana from within!”

Plowboy will be putting out Escovedo’s upcoming record with The Fauntleroys, a supergroup that also includes Nick Tremulis (Nicholas Tremulis Orchestra/Candy Golde), Ivan Julian of The Voidoids and drummer Linda Pitmon (The Baseball Project). The band is set to perform at the label’s official SXSW showcase on March 15th at The Saxon Pub in Austin, Texas alongside Chrome (with members of Drivin' n Cryin') and Plowboy acts Ghost Wolves, Paul Burch, Buzz Cason, Chuck Mead and J.D. Wilkes & The Dirt Daubers.


When in A&R man mode, Chrome follows simple criteria when selecting artists for the label.

“Obviously, we’re looking at track records and things like that, but for the most part, it’s got to be something that clicks with us,” he says. “It doesn’t necessarily have to be commercial. Case in point, we have Buzz Cason, who was in The Crickets and was the original voice of Alvin and the Chipmunks. He worked for Liberty Records, wrote ‘Everlasting Love’ and sang back-up for Elvis. He’s owned a recording studio here in town, and that’s where The Batusis recorded. I’ve known him for a long time. He came up and said, ‘I want to put out a new record.’ He brought us this finished record that was just amazing. The same with Paul Burch and people who have approached us; it’s all been stuff that we kind of liked ourselves.”

In addition to his work at Plowboy, Chrome is gearing up to play some California live dates in April with the recently reformed Streetwalkin' Cheetahs. As far as where “The Two-Headed Cheetah Tour” goes from there, Chrome is taking things one day at a time.

“Right now, it’s California,” he says. “We’ll talk about everything else, because everyone seems to be pretty happy to hear that The Cheetahs are back together, too. It might be fun to do an East Coast thing or something.

“I’m not going to go on the road for five weeks or anything like we used to do,” he adds.  “I’m too busy to do that, and I do value my home life now, but a couple of weeks here and a couple of weeks there might be good.”

No matter where Chrome’s life takes him at this stage of the game, his legacy as one of Rock’s true survivors is already etched in stone. Aside from “a slip here and there,” he’s been off hard drugs since 1996 and free from alcohol since 2007 – certainly an accomplishment from someone who’s been counted out more than once in his life. While some artists don’t last 40 months in this business, Chrome’s been at this for 40 years. What kept the man going when things got rough along the way?

“There were periods when I wasn’t as function as I am now (laughs),” he replies. “There’s a lengthy period of time there where I was pretty messed up on drugs and wasn’t handling it well at all. You have to take that into account as well. I guess getting off drugs really had a lot to do with it. All of a sudden, I decided that I wanted to get my music back, and did what I could to get it back.”