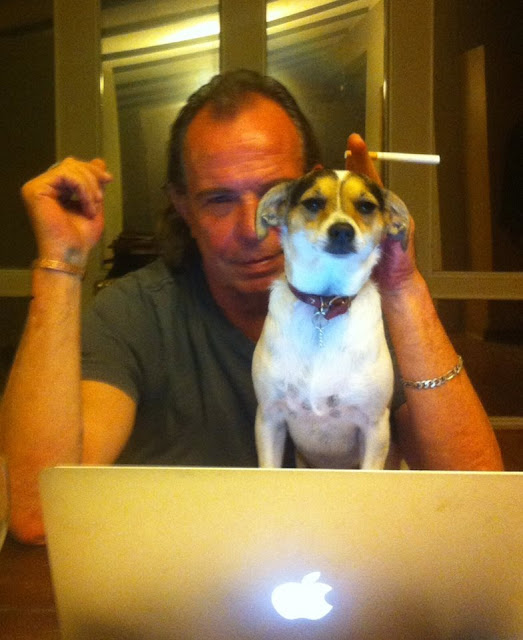 When you get right down to it, Mike Hudson didn't need to do a goddamn thing after releasing the “Street Where Nobody Lives / What's This Shit Called Love?” single with The Pagans in 1978. As perfect as anything off Raw Power, this two-sided gem easily secured Mike's place in history, making everything (records, books, articles, etc.) he blessed us with in the ensuing decades icing on the cake. To say he was a musical and literary inspiration to me would be the understatement of the fucking century.

In 2014, I received a promo for Hollywood High, Mike’s first Pagans release in years. The record was and is amazing. I couldn’t believe that I had the opportunity to write about my love for The Pagans in the present tense. (My review can be read HERE.)

A few weeks after I posted the review, my friend Loren Molinare put me in touch with Mike for an interview. He was as great as I hoped he would be, and we hit it off immediately. He later told me that my story was the “definitive” piece on The Pagans. I’m sure he was just being kind, but goddamn… that meant a lot to me. (You can read the story HERE.)

Last year, Mike asked me if I would be interested in premiering a new song he had recorded with Richard Duguay of Personality Crisis called “Bad Bet” on my site. Would I be interested???? Was he fucking kidding me???? That post remains one of the highest-viewed things I’ve ever put up. I'm still pinching myself. (Check out the song – which, naturally, is a fucking scorcher – HERE.)

Mike was far from the clean-cut type. As he blazed a trail for musicians and writers the world over, he also blazed himself in the process. Simply put, Mike created perfect Rock ‘n’ Roll because he fucking was Rock ‘n’ Roll.

Of course, maintaining such a commitment rarely guarantees a long and prosperous life, and Mike snatched defeat from the jaws of victory on more than one occasion in his life and career. There was as much scorched earth in the Mike Hudson narrative as there were incredible words and sounds.

Perhaps the saddest thing about his death is the fact that he had been on a creative upswing in recent times. A few weeks ago, he emailed me some brand-new Pagans tracks he was excited to share. The stuff had the same intensity as anything he put out 40 years ago. With everything he did in the last few years, I always felt that the guy was still just getting started. Still reaching. Still putting the rest of us “punks” and “writers” to shame. Creatively, Mike was firing on all cylinders at the end; more was meant to come.

Mike and I had made tentative plans to meet up in December when I hit California. I’ve been going through years’ worth of our Facebook messages. What a raw, funny and brilliant man. I’ll miss the hell out of him.

This past Tuesday, Mike posted the above photo on my private Facebook page as a comment to my status update about one of my dogs constantly jumping up on my lap when I was trying to hit writing deadlines. The pic came with the following message:

"Just teach him how to type, Joel... My Lola Belle can do line edits and everything now!"

I’m very sad that Mike is gone, but he sure gave us a hell of a lot while he was here. That motherfucker was the real thing.