BOOK EXCERPT: Richard Hell and the Voidoids' "Blank Generation" at 40 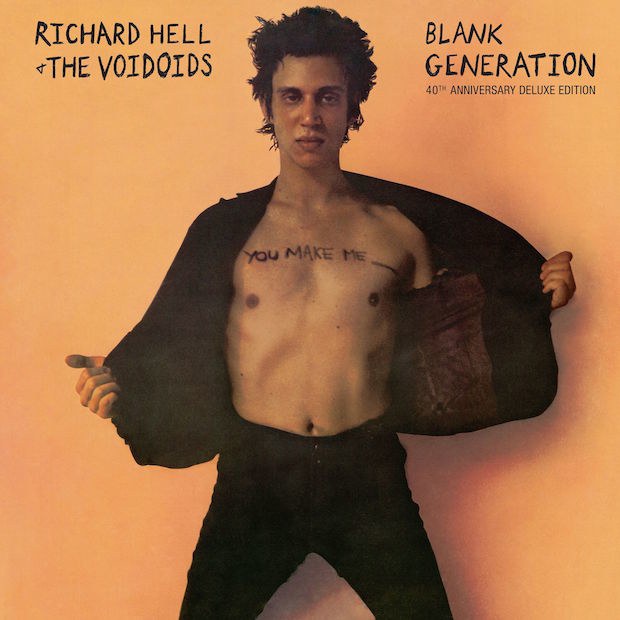 Today marks the release of the 40th Anniversary Deluxe Edition of one of the greatest albums ever - Richard Hell and the Voidoids' 1977 classic, Blank Generation. In celebration of this momentum occasion, I have posted an excerpt of my chapter on that album that appears in my book-in-progress, Albums That (Should've) Changed the World (which is really just a grandiose way of saying, "Albums that deserve a second listen.") The book has been a pet project of mine for the past 12 years, and it's something I hope to finally unveil in full within the next year or two. What appears below is roughly 30 percent of the Richard Hell chapter, and it represents some of the earliest writing I did for the project when I started it in 2005. The words below are a snapshot of a work in progress; various tweaks and edits will very likely occur between now and the final publication date. I hope these words will provide the uninitiated with a strong introduction to a truly fantastic record.

Long before the great Dee Dee Ramone first shouted “1,2,3,4!” and John Lydon unleashed his anarchic whine, Richard Hell pioneered a sound, attitude and aesthetic that would (for better or for worse) launch a thousand bands. A disheveled court jester with an intellectual bent, Hell is responsible for proving early on that punk rock was not always the battle hymn of imbeciles. Since making his musical debut in the early ’70s, Hell has lived a life marked by drug addiction, music industry indifference, self-imposed obscurity…and truly amazing rock ‘n’ roll. Although his celebrated work as a writer/essayist/poet has often overshadowed his sporadic musical endeavors, Hell is the man behind Blank Generation, one of the smartest, most exhilarating music collections ever produced in Manhattan’s Lower East Side.
But before diving into any of that, a history lesson is in order.
Born in Lexington, Kentucky in 1949, the man who would become Richard Hell began life as Richard Meyers, a rambunctious problem child with a gift for getting into trouble. At 16, he was awarded for his talents with a one-way ticket to a Delaware boarding school. There, the young miscreant met fellow student Tom Miller. Sharing a mutual love of poetry and music, the pair quickly became inseparable. Belong long, the two partners in crime were hatching plans to escape Delaware and explore new creative opportunities.
After a botched attempt to run off to Florida, Meyers and Miller eventually made their way to New York City by the close of the ’60s.  With the help of Delaware drummer Billy Ficca, they formed their first band, the Stones-flavored Neon Boys, in the fall of 1972. Like most inaugural music projects, the Neon Boys’ existence was crude and short-lived. Although the trio disbanded in the spring of ’73 without performing a single show, they stuck together long enough to record a now-legendary six-song demo. While the tape marked the recorded debut of Miller’s skillful guitar playing, bassist/singer Meyers was clearly the star of the show – even if the man couldn’t sing a lick. Like all great artists, Meyers made the absolute most of what he had, using his shaky, Dylan-esque pipes and barely adequate string plucking to their fullest advantage. The recording’s standout track, “Love Comes In Spurts,” showcased the new performer’s gift for wordplay:

By early 1974, Meyers and Miller were ready to take a second stab at music. After reconnecting with Ficca, they joined forces with guitarist Richard Lloyd and began writing new material under the name “Television.” Around the same time, the pair reinvented themselves with new monikers: Miller became “Tom Verlaine,” while Meyers went to Hell.
With Verlaine and Hell splitting songwriting and vocal duties, Television quickly found their niche. Hell’s strongest number, the incendiary “(I Belong To The) Blank Generation,” utilized Ficca’s jazzy drumming and a sly Verlaine/Lloyd rockabilly attack to showcase the singer’s expanding lyrical talents:

While it is tempting to categorize “Blank Generation” as well-crafted nihilism, its author clearly had other intentions in mind. In Clinton Heylin’s exceptional 1992 book From The Velvets to the Voidoids: The Birth of American Punk Rock, Hell cleared the air on his most (in)famous composition:

People misread what I meant by ‘Blank Generation.’ To me, ‘blank’ is a line where you can fill in anything. It’s positive. It’s the idea that you have the option of making yourself anything you want, filling in the blank. And that’s something that provides a uniquely powerful sense to this generation. It’s saying, ‘I entirely reject your standards for judging my behavior.’
Before long, Hell developed an image to accompany his hard-hitting sound. Rejecting the flamboyant pomposity of glam rock, Hell took to the streets in dirty, torn clothing (often held together by safety pins) and wildly unkempt hair. While major, soon-to-be-obsolete rockers celebrated glamour, Hell championed the grimiest aspects of human existence.
Appropriately, Hell found his first audience at one of New York City’s biggest dumps. In the spring of 1974, Television started a live residency at a brand new Bowery dive characterized by its funny name (“Country Bluegrass And Blues”) and less-than-sanitary amenities (the regular presence of owner Hilly Kristal’s dog brought new meaning to the word “shithole”). For the next several months, Television performed weekly at “CBGB,” drawing greater crowds with each performance. Before long, Television were the undisputed toast of the town, regularly sharing the CBGB stage with such up-and-coming acts as the Stilettos (featuring a young Debbie Harry) and the Patti Smith Group.[1]
With Hell and Television leading the way, CBGB quickly became the hotbed of the newly dubbed “punk” music scene. Although the name would eventually come to symbolize Mohawks and three-chord blasts, “punk” was originally used to describe virtually anything that fell outside the drab spectrum of mainstream radio. Not surprisingly, “punk” music of the day included everything from the roots rock of Tuff Darts to the sophisticated geek chic of pop wizard Jonathan Richman. The rapidly expanding New York crowd soon featured a host of new faces, including a young San Francisco Bay native named Roberta Bayley.
Worldly and well traveled, Bayley is one of a small few who can claim to have seen the beginnings of punk rock on both sides of the Atlantic. While living in London in the early ’70s, Bayley had briefly worked at Let It Rock, a clothes shop owned by budding impresario Malcolm McLaren. Finally settling down in New York, Bayley first met Hell in the summer of 1974. Needless to say, the striking southern boy made an immediate impression.
“I thought Richard had a combination of charm with a little danger added,” remembers Bayley. “He was smart, funny and as it turned out later, extremely photogenic.”
In addition to her regular gig as the doorperson at CBGB, Bayley soon built a reputation as an ace photographer, providing some of the earliest visual representations of New York punk. Her legendary work includes the cover shot for the first Ramones album, the infamous Heartbreakers “blood” photo (used as the front cover as the notorious Leg McNeil/Gillian McCain tome Please Kill Me), the Joey Ramone/Debbie Harry “Mutant Monster Beach Party” spread for Punk Magazine and “some of the only photos of Johnny Ramone smiling.” Of course, Hell became one of her most frequent subjects.
With Hell’s theatrical persona now in full swing, it wasn’t long before his notorious act caught the eye of Bayley’s former employer. First introduced to the thrills and spills of American punk while serving as the final manager of the New York Dolls, Malcolm McLaren became infatuated with Television’s intense bassist while staying in New York following the Dolls’ demise. Always looking for new and exciting ways to shake things up, McLaren decided it was time to introduce the Hell look and worldview to the young musicians who frequented his London shop, a plan he detailed in the pages of Please Kill Me:
I came back to England determined. I had these images that I came back with, it was like Marco Polo, or Walter Raleigh. These are the things I brought back: the image of this demented, strange thing called Richard Hell. And this phrase, “the blank generation.”

Soon, McLaren was hard at work overseeing the development of the band that would become the Sex Pistols. In his 1990 autobiography I Was A Teenage Sex Pistol, founding member Glen Matlock recalled how McLaren lobbied for the soon-to-be infamous John Lydon, a spiky-haired wiseass who clearly couldn’t sing, to be the Sex Pistols’ lead singer:

What we didn’t realize at the time was that one of the main reasons that Malcolm was so keen on John was that he was so like Richard Hell – who was one of Malcolm’s mates in New York. He was as near as dammit to being a stylistic carbon copy of Hell.

Opening with a series of dissonant guitar slams that instantly set the mood, the venomous “Liars Beware” found Hell in full-attack mode, offering a healthy slab of pointed rage to the unfortunate objects of his disaffection:

Look out liars and you highlife scum
Who gotta keep you victims poor and dumb
Your motives and your methods are not disguised
By your silk, soap, sex or your smiling lies.

Bolstered by an obvious ’60s garage rock influence, “Down At The Rock ‘N’ Roll Club” effectively summed up the fashion and self-indulgent spirit of a trip to New York’s most infamous punk nightspot:

They say, “Richard are you going to go out tonight?”
I say I’m uncertain, I ain’t feeling too right,
But I rip up my shirt,
Watch the mirror n’ flirt.
Yeah, I’m going out, out inta sight.

Blank Generation also made excellent use of Hell’s downright sick humor, as the lyrics to the deceptively poppy “The Plan” can be summed up as follows: Boy meets girl, boy impregnates girl, girl gives birth to daughter, girl splits, boy sleeps with daughter.
While “The Plan”’s subject matter was certainly shocking by ’70s pop standards, Quine’s bulletproof performance on a chilling cover of Creedence Clearwater Revival’s “Walking on The Water” remains Blank Generation’s most stunning element. In a scene dominated by anyone-can-do-it incompetence, Quine was a musician capable of turning a single note into a jaw-dropping epiphany.
The album’s closing opus, “Another World,” recalled the spirit of Hell’s former Television days by offering a musical jam well beyond the six-minute mark. Backed by the same kind of angular drive that would soon characterize Gang of Four’s early material, Hell concluded “Another World” by turning his already key-impaired voice into a whirlwind of whines, moans, groans and uncontrollable hacking. A star was born!


Copyright 2005-2017 Joel Gausten/Gausten Books. Reproduction of any of the above material is prohibited without permission from the author.