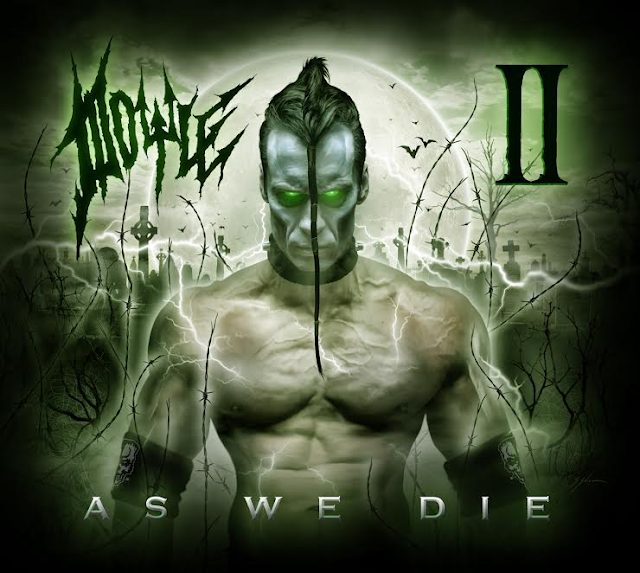 Since first joining The Misfits in 1980, guitarist Doyle Wolfgang von Frankenstein has built a reputation for being one of the most menacing figures in music. More of a guitar puncher than a guitar player, the man’s physical stature and intimidating glares have kept Horror Punk and Metal fans entranced for nearly four decades. And as fans around the world recently learned, he’s also one resilient bastard.

While recently on tour with the longtime friends GWAR in support of Doyle II: As We Die (his second album with his namesake solo band), he missed only three dates after a detached retina led him to have emergency eye surgery. Currently, he’s on his own headlining tour – proving that you can’t keep the Monsterman down.

In addition to promoting his new album, Doyle is gearing up to play Misfits shows in Las Vegas and Los Angeles next month with his brother/original bassist Jerry Only and founding singer Glenn Danzig in tow. These dates follow the enormous success of two reunion shows with this lineup held last year at the Chicago and Denver Riot Fests. Doyle and I discuss the reunited Danzig-fronted lineup – as well as his vegan lifestyle and his relationship with Arch Enemy singer Alissa White-Gluz – in the following interview.

It’s annoying; I’m really getting sick of it. I’m going for another operation when I get home. Hopefully, it’s better.

What the fuck happened?

It just detached on its own. It just happens; it’s normal. Whatever.

I know you were later able to catch up with the GWAR tour, and you’ve obviously had history with GWAR over the years. That’s a band that’s had some changes over the past few years, unfortunately. What do you think of the current show GWAR’s bringing on the road now?

It’s great! I think everybody should go see it. Same thing – fun, shenanigans and a sticky mess!

Your current band is you and singer Alex Story; from what I understand, you also currently have Wade Murff on drums and Brandon Strate on bass.

Yeah… I program the drums and write all the music, then send it off to Alex. He’ll send it back a couple days later, and it’s a fucking masterpiece. I don’t know how he does it. Izzy – Brandon Strate – has been with us for many years. He’s a keeper. Wade Murff was on our last tour and has been doing great.

You had Brandon Pertzborn from Black Flag drum on your new record. Why wasn’t he going on tour with you this time around?

He’s playing in a band called Horror. I don’t know what kind of music it is; I really haven’t checked it out yet. It breaks my heart that he’s gone, because he was perfect. I want him back! (laugh)

I know that the frontman position is important to you in any band you play with. What makes Alex somebody you’re happy to move forward with?

The man’s a music fucking genius. He’s a great performer; every word he says, you believe. You know what? He’s a great melody and word writer, and I’m not. When you have somebody who’s better than you at something, you let them do it. If you don’t, you’re a fucking asshole.


Let’s talk a little bit about your vegan diet. You’ve always been in good shape, but how has being vegan most benefited your health in the last few years?

Number one, it’s changed my mood; I’m happier. Number two, I’m way leaner than I ever was. If you look at pictures of me playing in the ’90s compared to pictures of me now, I look better now and I’m 20 years older.

When you first made that transition to a vegan diet, did you experience any stumbling blocks? It’s a major dietary change; when people get used to eating certain foods, they have certain cravings for things they want to have but can’t. What were the first few months like for you when you were adapting to this new lifestyle?

It was awesome. My girlfriend’s vegan; I started eating vegan with her. We were dating; she had come to New York to visit me, and she had to get back on the plane to get to wherever the fuck she was going. We were running around New York City trying to hurry up to get her to that plane so we didn’t miss it – but we were starving. She said to me, ‘If we don’t find me something to eat, we’ll find you something to eat.’ I [said], ‘Fuck that! I will never, ever eat anything in front of you that bothers you,’ and I never did. We would go to vegan restaurants; I didn’t know what anything was, so she would order everything. Everything that I’ve ever tasted, I’ve looked up at her and gone, ‘Holy shit!’ She schooled me on the pollution and the sickness [a regular diet] is causing the world, and the torture to the animals. As an intelligent being, you see that [this lifestyle] is the only way to go. People who don’t are pretty ignorant, I think.

A lot of people obviously eat garbage. For those who want to make a change, throw away all that shit and go in the direction you’ve gone in, what would be the best advice you’d offer them to make sure that their transition is as successful as it’s been for you guys?

The thing is, you can Google any recipe in vegan. If you want a vegan lasagna recipe, you’ll get fucking hundreds of them. That’s all you’ve gotta do. Anything you want to make, you can Google it and you can make it – and it’ll taste better than the real stuff that you were eating as far as animal products. There’s an app called HappyCow that you can get for restaurants. If you go to some vegan restaurants, you’ll learn what you like and what you don’t like. Fortunately for me, there wasn’t anything I didn’t like. There’s also an app called Cruelty Cutter. You take that to the store and you scan the barcode, and it tells you if [the product] is cruelty-free and if it was tested on animals. That’s for any product – shampoos, anything.

Speaking of Alissa, I actually saw Arch Enemy last week in Worcester, MA, where you were going to play last month before your eye got messed up. You and Arch Enemy are kind of crisscrossing on tour these days. For the two of you, what's been the key to being able to balance your relationship with what you each have to do on the road? Obviously, you two have different schedules at the moment.

Number one, you’ve gotta like each other. When I get off this tour, I’m going to get another eye operation. As soon as the doctor says I could fly, I’m going to go on her tour. Sometimes she comes with us, and sometimes I’ll go on their whole tour with them for a month or two. As soon as she’s home and if I’m here, I go pick her up at the airport. We make it work. You’ve got to want it to work. It’s like with anything else.

When you go out with Arch Enemy next time, are you bringing your band with you?

We keep asking for that, but I don’t think their management thinks we’re Metal enough. I don’t know. Obviously, me and her want to do that. Hopefully, if the Misfits thing works out and we do tour, I can get them to open for us. 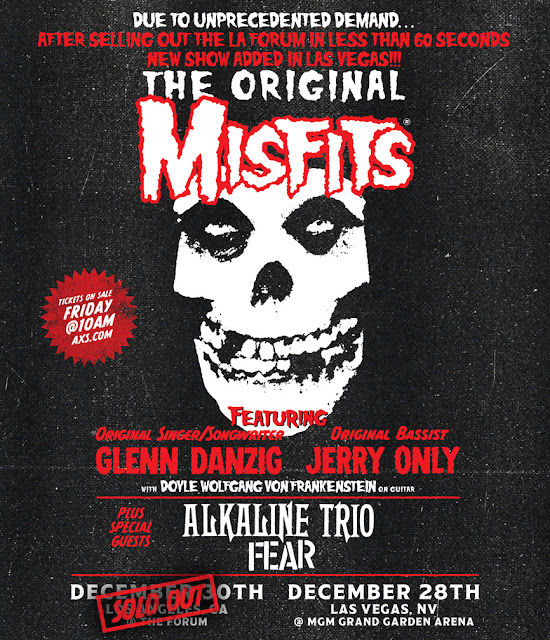 On the subject of The Misfits, you’re obviously doing stuff with Glenn again, which a lot of people have been waiting a long time to see. There have been different versions of the band over the years, but what do you think it is about you, Jerry and Glenn together that makes it special?

If you take all of us individually, we’re only so big separately. If you put us together, it’s epic. It’s like you’re collecting action figures – now you’ve got them all! People think they’re missing something, so they want to see it.

This year is the 20th anniversary of The Misfits’ American Psycho record. When you look back at  that ‘Resurrection’ lineup, are you satisfied that it accomplished what it set out to do, or is there still unfinished business with that lineup in your mind?

I don’t really think about that. When I hear those songs, I don’t even recognize them. I’m more into Metal; that’s the direction I’m going with ‘Doyle.’

[’90s-era Misfits singer] Michale Graves has been talking in recent interviews about the potential for a reunion of that lineup. Is that something you’d be down for at this point in time?

I’ve heard that. I don’t know who he’s been talking to, but the only reunion is the ‘Original Misfits’ – Glenn, Jerry and me – and it’s happening in December again.

It’s been 30 years since Metallica covered ‘Green Hell’ and ‘Last Caress.’ How would say those covers impacted not only the Misfits legacy, but also what you guys are able to do now with the band?

I think Cliff Burton turned the whole world on to The Misfits. If he didn’t, we wouldn’t be doing these reunions. He enlightened people to it. It’s like with my band now; hardly anybody knows I have a band. When they find out I have a band, they like it.

You’re doing a band of your own now in an industry that’s basically gone. Everybody can get stuff for free. How do you see that impacting what you’re able to do with your band in 2017?

I think it sucks, it should be a crime and you should be fucking prosecuted for stealing music. If it’s one song, it should be a $10,000 fine. If I was making motorcycles and somebody came in and took one, would that be a crime? We’re making fucking songs, and people are stealing them. That’s a fucking crime. This costs us money to do. Everybody wants more music, and they want it for fucking free. If everybody’s stealing it, guess what? Everybody’s gotta get a job and there is no fucking music. You’re gonna have corporate assholes making fucking music, and that’s what you’re gonna get. A fucking Happy Meal at McDonald’s costs the same as a CD, so put down the cheeseburger and support the artist!

You were hanging around The Misfits when you were a kid before you joined them. What did your parents think of lyrics like ‘I raped your mother today’ back in the day?

They couldn’t understand a fucking thing Glenn sang, and neither could I!

(laughs) So it wasn’t a problem then?

No. I mean, my dad just felt we were idiots. He was a horse racing guy; he went to the track, and some kid had a Misfits hat on. He couldn’t believe somebody knew who we were!

What are your plans with the Doyle band in 2018?

We have two US runs and a UK run all booked. We’re trying to get on some festivals in Europe. We’re looking at Columbia and also Russia.

You’ve been doing this since you were a kid. What keeps you in the game? What does doing this give you in life that you can’t find anywhere else?

I don’t want to be anything else. To me, not having a goal to be something – like the guy who goes to work at a gas station, gets his check, goes home, smokes cigarettes and drinks liquor, just to get up on fucking Monday and go do it again – is something I don’t understand. I just don’t get it.