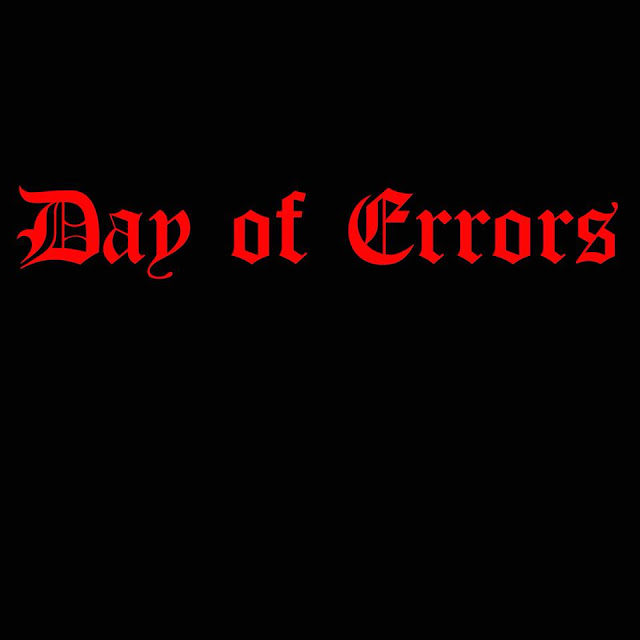 On November 17, the legendary Black Sabbath said goodbye to their worldwide fan base with the release of The End, a multi-format representation of their “farewell” concert recorded in Birmingham, England earlier this year. Some hardcore fans might argue that Sabbath’s true final show was performed at the conclusion of the 2005 Ozzfest tour, as that was the last time original drummer Bill Ward performed a full set with the band before failed negotiations halted his participation in their supposedly final activities. In an interesting coincidence, November 17 also marked the official recorded debut of Ward’s new band, Day of Errors, who unveiled two songs, “Day of Errors” and “Blaspheming at Creation,” on various digital platforms late that evening.

The Day of Errors story dates back to at least 2015, when Ward hinted at the eventual arrival of the [then-unnamed] group in an interview for this site and posted a couple of video teasers on his Instagram account. Last year, the band – then comprised of Ward, bassist/lead singer Nick Diltz and guitarist/vocalist Joe Amodea (whose credits include a stint with criminally underrated Alt. Metallers Warrior Soul) – played a small number of gigs in California including a June 28 performance at the famed Whisky A Go Go. Then, Day of Errors’ public output went dark until last month, when the band announced a string of live dates this December with openers Witch Mountain (dates and relevant band links below). They also unveiled a new member, singer Dewey Bragg, who has replaced Diltz. Bragg is perhaps best known for fronting the band Kill Devil Hill, who feature another former Sabbath drummer, Vinny Appice. Now comes the release of these two news songs – and they’re absolutely scorching!

Let’s begin by answering the biggest question on the table. Yes, Ward’s playing on these two songs is utterly stellar – easily among the strongest work of his career. When his playing kicks in at the 38-second mark on the eponymous track, it’s instantly clear that his unique approach to the kit is as healthy and powerful as ever. Starting off by propelling the tune with a groove similar to Black Sabbath’s “Heaven And Hell,” Ward guides his newest musical cohorts through a multi-part number that regularly shifts in intensity and vibe for nearly seven minutes. Those who miss the magic of the original Sabbath will love what they hear at the 1:40 and 3:45 marks, which find Day of Errors producing riff/rhythm barrages that easily match the incendiary burn of the Ward/Iommi/Butler combination’s best moments.

Similar in tone and delivery to “The Wall Of Death” off Ward’s 2015 album, Accountable Beasts, the mournful ballad “Blaspheming at Creation” moves away from the Sabbathesque attack of “Day of Errors” in favor of offering the same kind of introspective lyrics and Pink Floydian musicality heard in a good chunk of Ward’s past solo work.

In terms of production, those listeners looking for heavy gloss certainly won’t find it here. There are no multi-tracked vocals or drums drowned in reverb – simply the sound of a group of inspired musicians creating something that Ward calls “loud, hard, with overtures of gut-kickin’ heavy, heavy parts.” Both tracks get more powerful and impactful with each listen – effortlessly and successfully offering a thrilling introduction to Day of Errors and an enticing sample of what’s to come.

At a time when his former comrades in Sabbath are riding off into the sunset as a band, Ward’s current work with Day of Errors proves that he is a man still willing and able to seek out new sonic adventures. For him, “The End” doesn’t appear to be anywhere in sight.

UPDATE: On November 20, Bill Ward announced the cancellation of the Day of Errors tour due to health issues. Bill is an extraordinary man, and I wish him a full and speedy recovery.

Beyond the Beasts: Bill Ward Moves On

From Grief to Glory: Bill Ward Conquers His Demons Through Art

Black Sabbath's Technical Ecstasy at 40: An Eclectic Moment in Metal