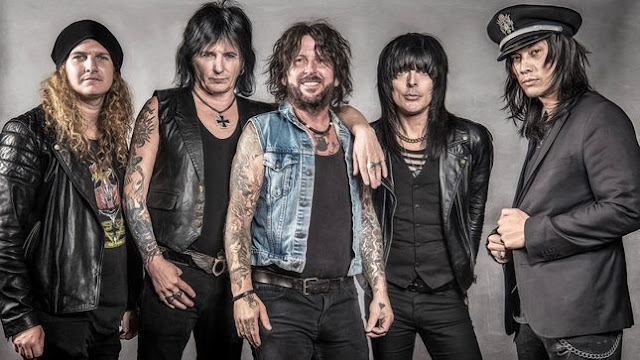 When L.A. Guns singer Phil Lewis yelled the above words on stage towards the end of his band’s thunderous set at the Tupelo Music Hall, there wasn’t a single person in the sold-out crowd who didn’t believe him. For 90 minutes, the veteran Los Angeles group took their audience back to a time when long hair, loud guitars and leather jackets ruled MTV and the Sunset Strip was Ground Zero for commercial American Rock ‘n’ Roll. For casual fans, the band’s set was an energetic and raucous reminder of Hair Metal’s glory years. For the diehards in the house, the performance was a celebration of a band that is still at the top of their game even after 35 years of industry woes, lineup changes, breakups, reunions and peaks and valleys in popularity.

In addition to the mere fact that L.A. Guns are an active unit in 2018, the most significant thing about the show was that Lewis and founding member Tracii Guns have finally buried the hatchet. As discussed in my recent feature on the band, the L.A. Guns story is fraught with more drama than a daytime soap opera. At one point in the recent past, there were two version of the band on the road – one featuring Guns and another featuring Lewis and long-running drummer Steve Riley. The current (and, as of this writing, only) incarnation of L.A. Guns features Lewis, Guns, guitarist Michael Grant, bassist Johnny Martin and drummer Shane Fitzgibbon. Of course, all this confusion is meaningless; what really matters is that any band hoping to draw a full house on a cold, wet Sunday night in Derry, New Hampshire better be able to deliver the goods. And that’s exactly what these Rock scene veterans did.

Although Lewis is one of many singers involved in L.A. Guns over the years, his time on the Tupelo stage proved without a doubt that he is definitive frontperson for this band. Even in his early sixties, the man sounds as strong vocally today as he did back when he joined the band in ’87. (Question for those in attendance:  How incredible was his Tyleresque scream at the end of “Don’t Look At Me That Way”?) Guns, who has kept the L.A. Guns firing since he was a teenager, absolutely slayed in a way that made one wonder why he isn’t mentioned more often in the same breath as Eddie Van Halen, Slash and other Los Angeles guitar legends. Always grittier and nastier than the vast majority of his original contemporaries, Guns delivered a performance that effortlessly showed that L.A. Guns are still a band of musical substance despite fluctuating public interest in the sound and era he helped put on the map more than 30 years ago. In a show of confidence in the group’s newest blood, Lewis and Guns departed the stage at the gig’s midpoint to allow Grant (who took over vocal duties), Fitzsgibbon and Martin to shine in their own well-earn spotlight with a surprising (and very well-received) cover of Prince’s “Purple Rain.”

While it’s not surprising that most of the set was drawn from L.A. Guns’ late ’80s/early ’90s heyday, the evening’s brightest moments came in the form of powerful newer material like “Speed” and “The Flood's the Fault of the Rain” (both from last year’s Lewis/Guns reunion record The Missing Peace) and the aforementioned “Don’t Look At Me That Way” off 2002’s bulletproof Waking The Dead. Unlike many bands that came up alongside them (only to fall apart when it became clear that their sonic muscle couldn’t back up their flash and image), L.A. Guns are creating music that is relevant now. Here’s to hoping this current chapter in the band’s notorious history is just beginning.