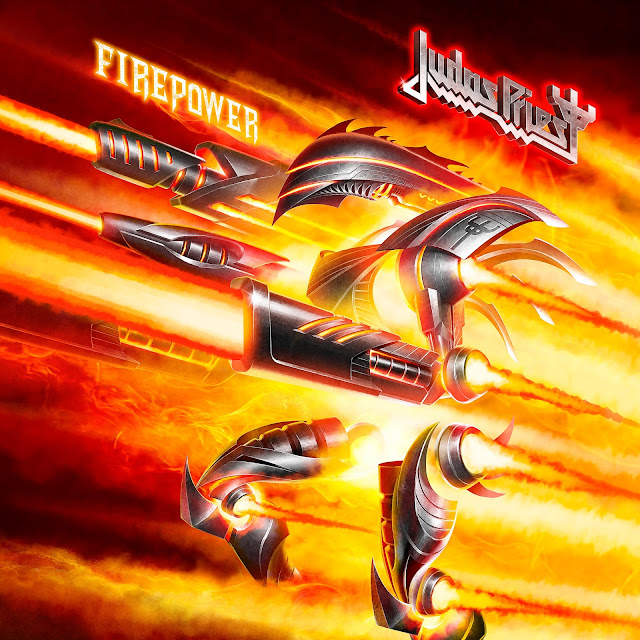 Firepower, the upcoming 18th studio album from Metal legends Judas Priest, is quite possibly the most critical release of their long and celebrated career.

One year shy of their 50th anniversary (if you count the very first Al Atkins-led incarnation formed in 1969), Judas Priest’s current standing in the genre they helped build is being met with both adoration and apprehension. While nobody who loves Metal would ever dispute the band’s relevance and impact, more than a few fans view the unfortunate announcement of guitarist Glenn Tipton’s retirement from touring due to ongoing struggles with Parkinson’s disease (and co-producer Andy Sneap stepping in to handle live guitar work) as a sign that the mighty Priest should pack it in. For some, the idea of the band hitting the road with only two “classic” members – singer Rob Halford and bassist Ian Hill – in tow diminishes their legacy. (For this Priest fan, such a mindset does nothing but insult the contributions of Scott Travis – a member for nearly 30 years and the best drummer the band’s ever had –and guitarist Richie Faulkner – a powerful player who replaced the outgoing K.K. Downing in 2011 with great aplomb.)

Amidst the chaos stands Firepower, which suddenly has the distinction of being the record that will either justify or sabotage the band’s plans to move forward. Frankly, Judas Priest’s very survival at this point depends on these 14 songs. If they blow it, it’s Game Over; if they rise to the challenges surrounding them, they will prove the naysayers wrong and show the world that they are still an impenetrable force in music.

If you think Priest’s best days are behind them, just wait until you hear this fucking thing. The Metal Gods are not only still here, but they’ve just delivered one of the top five albums of their career.

Anyone familiar with the Judas Priest story should know by now that they are at their best when their backs are against the wall. After releasing a handful of tepid albums in the mid-to-late ’80s, the band found themselves in a courtroom defending their livelihoods (and those of countless other recording artists) during an infamous trial that attempting to pin supposed “subliminal messages” found on their 1978 album Stained Class to a 1985 suicide pact between two friends that led to one dying instantly and the second passing away three years later after suffering disfiguring gunshot injuries. Walking away from this harrowing experience with their innocence and career intact, the band unleashed 1990’s Painkiller, a ferocious collection that brought them back from near-oblivion. With this narrative in mind, it is no surprise that Firepower matches much of Painkiller’s sonic muscle and hits the listener with body blow after body blow. Even when you can predict the song arrangements from a mile away (which isn’t necessarily a bad thing – case in point: The Ramones), Firepower doesn’t disappoint for an instant.

After all these years, Judas Priest have succeeded in doing something that no one else in the twilight of their career ever has: They have given us an album so strong that every song could be a single. Firepower displays everything that makes Judas Priest great: Anthemic choruses, blistering guitar solos, charging drums and the best voice in the game. (Listening to Halford’s bulletproof performance on Firepower, it’s stunning to consider that 28 years have passed since he laid down those bar-raising shrieks on Painkiller’s title track. The man was, is and will forever be the definitive voice of Metal.) It’s also worth noting that Firepower’s most intense moments don’t truly kick in until track 11 (“Traitors Gate”), which launches a four-song closing onslaught that concludes with the extraordinary ballad “Sea Of Red,” a song highlighted by one of the most soulful performances Halford has ever contributed to a Priest record.

Most importantly, 70-year-old Tipton (who recorded his parts before his health prevented further activity) puts down perhaps his most inspired performance in years. If Firepower ultimately proves to be his swan song with Priest, then the man is saying goodbye on the highest note possible.

Full marks to the production team of Sneap and the returning Tom Allom (the man behind the band’s entire ’80s output) for keeping the music epic without succumbing to pretentiousness and the sound heavy without sacrificing Priest’s trademark love of melody.

If you choose to sit out Priest’s upcoming tour due to the changes in the lineup, you’re going to miss out on live renditions of their best material in decades. While many bands their age will likely never release new music that effortlessly stands alongside the brightest moments of their pasts, Firepower is something the Metal world desperately needs in 2018: An absolutely perfect album with classics from start to finish.

Thank you, Judas Priest. Long may you (still) reign.