Too Ugly for Hollywood, Too Great to Quit: The Continuing Saga of Little Caesar

One of the most consistently great bands in the genre, Little Caesar are set to release their latest album, 8, on March 16 on Golden Robot Records. Produced by Bruce Witkin, 8 is easily one of the most powerful chapters in the group’s discography – song after song of instantly memorable meat-and-potatoes Rock ‘n’ Roll with hooks for days. Imagine a raunchier Hanoi Rocks fronted by Bob Seger. If that thought gets you going, then you need 8 in your album collection.

Formed in 1987, Little Caesar first made waves at the start of the following decade with an MTV-driven hit cover of Aretha Franklin’s “Chain Of Fools.” Right off the bat, they stood out like sore thumbs in the overcrowded “Hair Metal” scene of the era. Far from pretty-boy pinups, the guys in Little Caesar were heavily-tattooed and grimy and looked like they hadn’t seen a razor in months. In front stood singer Ron Young, a truly gifted Soul belter whose image personified their undeniable edge. Little Caesar were the real thing – whether the music industry was ready for them or not.

After an eight-year split, Little Caesar returned in 2001 and have been kicking ass ever since. These days, their core members – Young, guitarist Loren Molinare and drummer Tom Morris – are joined by bassist Pharoah Barrett (formerly of incredible ’90s should-have-beens The Four Horsemen) and former Bang Tango guitarist Mark Tremalgia. Despite lineup changes over the years, the integrity of the band’s output has remained intact.

“We’ve been to Hell and back a few times in the last 30 years,” Molinare says. “Making the switch from [former bassist] Fidel [Paniagua] to Pharoah was one huge change, and we’ve probably had more guitar players than Spinal Tap has had drummers! Ron, Tom and I have been here since Day One; we know what a guitar player should sound like. When you start changing members, some bands don’t sound the same. We have retained that, and that’s because we know who we are and what we want to be.”

When Little Caesar released their eponymous debut album in 1990, it appeared that a massive career was just around the corner. In addition to being signed to a big label and having the legendary Bob Rock produce the album, the band was managed at the time by music industry powerhouse Jimmy Iovine. The band had a hit video on MTV and were on major tours. Unfortunately, this great fortune would not last very long. Shortly after the release of 1992’s Influence (which saw David Bowie guitarist Earl Slick replace original guitarist “Apache”), the band was no more. Why did the Little Caesar machine break down despite having so many fantastic moving parts working in its favor?

“That’s such a tough question,” Morris replies. “We were on DGC, which was a brand-new offshoot of Geffen. They kind of just wanted to hit a homerun and aim for the fences with the band. They saw this band that wrote these Melodic Rock songs and these really great ballads, and I think that they thought radio would be the salvation. We felt our strength was on the road; we preferred a more organic ‘grind it out and win them over’ way. We got caught up in some marketing and radio decisions that hurt us. There was also a visual disconnect; we were considered very scary-looking back then. Not many bands were tattooed, which is funny now. With the facial hair and everything, we looked like we’d have a heavier sound than we did. I think people had a hard time putting that together… It’s hard to know what went wrong. Things just played out like they did.”

“After the first album, ‘Apache’ quit the band and then we got Slick in there at the tail end of that first album stage,” adds Molinare. “The whole music scene kind of changed around ’92. The Seattle scene started breaking; I think that kind of freaked out the label. Even though Nirvana was on DGC/Geffen, that kind of came into play a bit. When Jimmy was our manager, it was strong; he was an iconic kind of guy. He left to start Interscope; after that, things started changing. We didn’t have the power base to deal with Geffen like we did when we got signed. Those things started adding up.”

More than 25 years after Little Caesar’s only time on a major label, Molinare is pleased with their current standing as an independent act.

“We control our own destiny. If the train goes off the track, it’s our fault. When that whole first era came crashing down, it wasn’t our fault; we were victims of circumstance. When we stepped away from it and came back, I think we approached it more like we did in the beginning days where we got together because we enjoyed playing with each other and it was fun. After having the big record deal and having that wind down after two albums, we just missed playing with each other. It was the music that brought us together in the first place, and it was the music that got us back together in the early 2000s.”

“I appreciate it more now than I did then,” Morris shares. “I was so worried about, ‘What are we selling?’ ‘How many tickets did we sell?’ I think when you’re on a [major] label and there’s all this pressure, you’re not really appreciating it because everything is so high-stress.”

“Rock is still really appreciated over there, especially for us because our sound is very American since it’s rooted in the Blues with tinges of Southern Rock,” Morris says. “They really appreciate American music, and there’s still a big appetite over there for Rock ‘n’ Roll, and that’s probably why all the veteran Rock bands go over there. You can find a good audience, and they’re loyal. They have a broad sense of history with music. Rock in the States has become more of a niche thing. We all grew up with Rock being the driving force in culture, but that has changed. Now, you’ve got Hip-Hop, Pop and Electronic Dance music, at least with young people.”

No stranger to this website (thanks to his extracurricular work with The Pagans and Glitter Trash), Molinare has enjoyed a Forrest Gump-level career that has placed him right in the middle of some of the most important eras in music history. In the late ’60s, he formed the proto-Punk band The Dogs in Lansing, Michigan. During their original Detroit-area run, they shared stages with the MC5, The Stooges and a young guitarist by the name of Ted Nugent. In the early ’70s, The Dogs decided to try their luck in New York. One day, they saw a poster advertising an upcoming performance at the Hotel Diplomat by a new band called KISS. Intrigued, Molinare tracked the band down to see if The Dogs could be added to the bill. Although there wasn’t a spot for The Dogs on the show, KISS did take an interest in what they had to offer.

“They said if we got a gig, they’d come see us. They did, and then they said if we did a favor for them and picked up some gear out on Long Island, we could play with them at Coventry in Queens [on August 31 and September 1, 1973]. There was no YouTube and internet in ’73, so I still didn’t know what they looked like [on stage]. They showed me pictures of a gig, and I was just went, ‘Oh my God!’ When we played the shows, I just sensed that those guys were so focused that they were going to make it.”

Seventeen years later, Molinare was on the road with Little Caesar opening for KISS on the Hot In The Shade tour. In addition to getting reacquainted with his friends from the old New York club days, he received plenty of advice for Little Caesar from an observant Gene Simmons.

“He was on the side of the stage a lot taking notes. When we played the Richfield Coliseum, he said we were running around too much on stage – like chickens with our heads cut off. He said it was arena rock and we needed to slow down and that everything needed to be exaggerated. In Indianapolis, he came in and made suggestions on changing our set order. Not many people in this industry will tell you what you should or shouldn’t do. To his credit, he did that, and he didn’t have to.”

“I remember Gene coming into our dressing room one time and lecturing us about our facial hair!” comments Morris. “He goes, ‘You guys with your facial hair and your Blues!’ He was getting on our case because we were kind of an anomaly at the time. Not too much later, he grew facial hair himself!”

(Nearly 50 years after forming, The Dogs are still going strong. The band’s influence is far-reaching; as former Black Flag/Circle Jerks frontman Keith Morris once told me, “There would be no Black Flag without The Last and The Dogs.”)

With a strong new album and a dedicated fanbase home and abroad, Little Caesar prove that a great band can rise above the music industry maelstrom. In Molinare’s mind, none of it would have been possible without the band members’ loved ones.

“We’re really lucky that our families and respective spouses know what the music means to us and support us. That makes it a hell of a lot easier after all these years.”

“It’s funny; we started this when we were kids, and now we’re middle-aged family guys,” Morris adds with a chuckle. “There’s still that youthfulness in all of us that comes out when we’re playing together, but so much has happened in our lives. It’s interesting being our age now and playing Rock ‘n’ Roll with all the responsibilities that come along with being an adult. But in a way, I think I enjoy it more now than I did then because of that; I realize how lucky we are that people even show up to see us.” 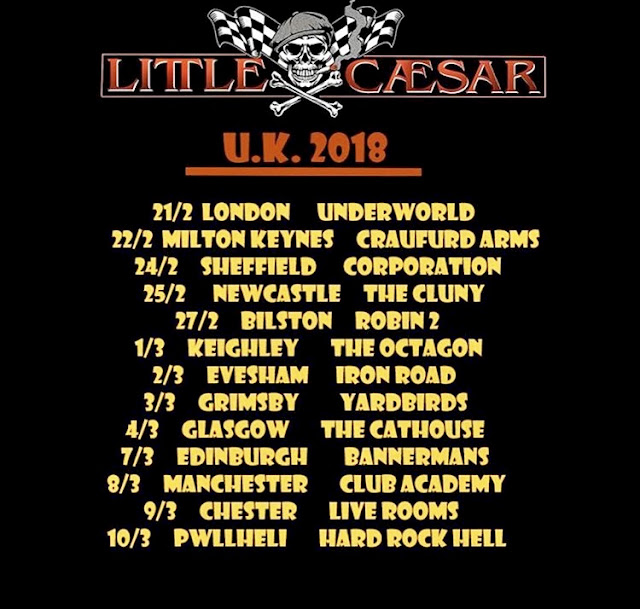