Five years ago, I drove to the sleepy town of Franconia, NH on a foggy night to witness an event commemorating the 20th anniversary of the death of everyone’s most beloved musical outlaw/coprophagia enthusiast, GG Allin. Naturally, it was one of the most surreal and thoroughly entertaining nights of my life. On July 1 – less than a week after the 25th anniversary of the man’s drug-fueled demise, I again found myself stepping inside the Dutch Treat restaurant for another round of sonic debauchery.

Always a much nicer guy that his legend would suggest, GG’s brother, Merle (who has kept the pungent flame burning since the singer’s death in ’93), was his usual affable, approachable self, holding court at the merch table and serving as The Murder Junkies’ public relations director. Thanks to the success of the band’s most recent tour, his usual avalanche of GG/Murder Junkies-related products was reduced to a relatively scant number of items this time around. Next to the table sat a makeshift tombstone for GG, which the band brought up to his resting place in Littleton earlier that day for a celebration. (The original stone was removed years ago to dissuade fans from shitting and pissing on GG’s grave.) 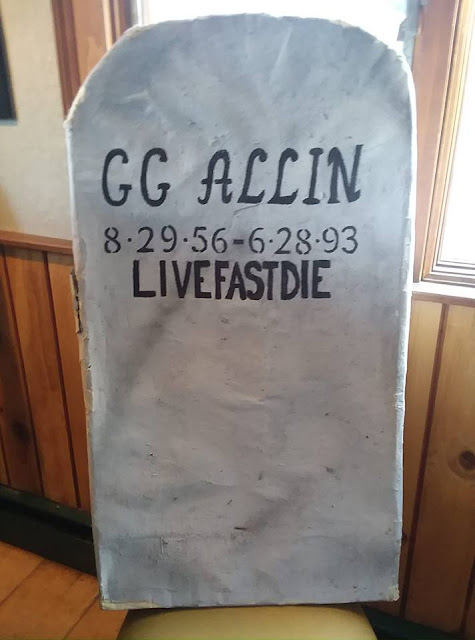 In many ways, the chaos surrounding our modern world has outpaced GG’s insanity. It says a lot about our society when the idea of a guy eating his own shit and singing odes to rape is less terrifying than the realities of regular school shootings, political/social division and economic slavery. Simply put, the horrors of the real word outside The Dutch Treat made anything that occurred inside the place seem downright quaint in comparison. When you set aside the disgusting lyrics and degenerate actions of the man being honored, what you really had this past Sunday was a celebration of family – a point driven home by the bittersweet moment when Merle lovingly dedicated Murder Junkies show opener “Once A Whore” to GG’s daughter, Nico, who was in attendance. Earlier in the evening, fans and friends alike chatted away with the Allin Brothers’ elderly mother, Arleta Baird, who greeted everyone with hugs and wide smiles. (I overheard her tell someone that she enjoys attending these tribute events because “people say nice things about [her] son.”) Much of the evening’s entertainment was raunchy and savage, but my favorite moment of the night was when I spotted Merle quietly conversing and strolling with Arleta with his arm around her.


Merle has had 25 years to prove that The Murder Junkies have more to offer than just being the guys who played behind GG’s bare, excrement-smeared ass as he caused mayhem and destruction. GG’s undying legend may still bring people through the door, but it’s up to the band to deliver the goods to keep them there. Sure, any 12-year-old boy with a hard-on and access to serial killer documentaries on YouTube could easily write the band’s lyrics, but only a fool would deny that the fellas are formidable musicians who know what the fuck they’re doing. The Murder Junkies don’t just offer audio slime; they deliver shades of Country and Blues in their sound in ways that demonstrate that there’s more going on at their rehearsals than simply writing the most offensive material possible. Full marks go to ace guitarist Sonny Joe Harlan and singer PP Duvay, whose imposing voice ranged from the guttural growl of GG’s later years to a dark crooning not unlike what you’d hear coming out of Paul from Sheer Terror’s mouth. The band’s set was highlighted by guest appearances by Jabbers guitarist Chris Lamy (whose history with that band dates back to when GG fronted them prior to going solo in the mid ’80s) and current Jabbers singer Wimpy Rutherford (ex Queers). While opinions vary on whether GG was a messiah or a psychopathic joke, there is no question that today’s Murder Junkies are one hell of a band.

(A personal aside: I remember Merle ringing me up in 1996 to see if The Murder Junkies could play at the all-ages Misfits show I booked at Action Park. With GG’s history still fresh in my mind, I reluctantly declined his offer despite being intrigued by the possibility. Merle did his best to convince me that GG was gone and this was a different era, but I was unwilling to budge. “We just want to fucking play,” he sighed. Knowing what I know now about The Murder Junkies as people and musicians, I regret turning Merle down. My belated apologies, buddy.)

As expected, Murder Junkies drummer Dino Sex spent the evening wandering around in an apparent fog. I’m sure he saw and enjoyed things that night that were above everyone else’s comprehension. Although his chops have diminished slightly with age, he’s still a beast behind the kit. While he refrained from shoving his sticks up his ass and flashing his manhood, he earned his place in the spotlight with a lengthy drum solo AFTER the rest of The Murder Junkies finished their show and walked away. It is unclear if this was by design or if the band simply neglected to tell him that the gig was over. Either way, it was great to see the guy still in action. I’d love to visit his planet sometime.

In addition to The Murder Junkies’ grand finale, the night boasted a killer lineup of support bands. They Hate Us – a supergroup featuring PP, Dino and Connecticut musician Malcolm Tent – kicked things off in a gloriously crude fashion, while New Jersey’s fun The Smoking Triples looked and sounded like Jeff Spicoli fronting The Dwarves. New England underground pirate Jonee Earthquake has been around longer than just about everyone, and his too-brief set got the crowd – by this time fully feeling the effects of hours of drinking – up and moving. Armed with an acoustic guitar and an acerbic wit, Tent forever earned a place in my heart during his solo set by responding to an audience member’s shouts of “Free Bird” by passing around a cup to successfully raise enough funds to actually play the fucking thing. (In addition to releasing a staggering array of music over the years, Tent is also a gifted photographer; his short-run book, The Women Of Devo, is worth checking out in all its brilliant Richard Kern-meets-David Lynch glory.)


There are people who look and sound Punk, and there are motherfuckers who LIVE Punk. Merle Allin is that guy. He turns 65 this year and is still at it. He told me that The Murder Junkies are planning to record a new album next year. That’s great news. Will he still be around at 69 to do a 30th “Deathaversary” show for GG? I sure hope so. There will always be a need in this world for the real thing – which is exactly what Merle and the other filthy bastards in The Murder Junkies still give us.