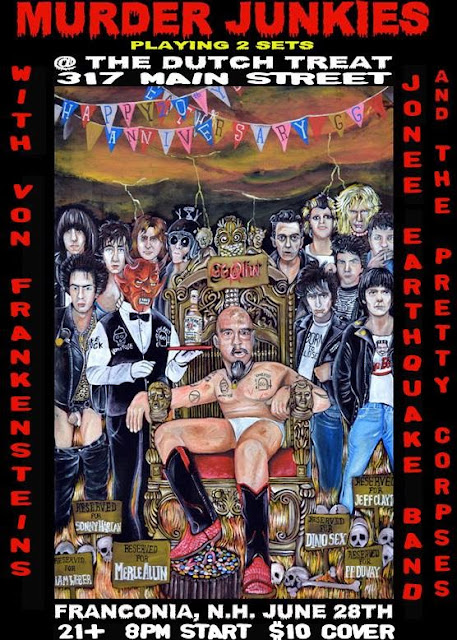 On June 28, I took a 90-minute trip from my home through a pea soup-thick fog to The Dutch Treat, a bar/restaurant in Franconia, NH. Already something out of a Stephen King movie thanks to the odd weather conditions, my journey instantly became more surreal once I arrived at my destination.

Characterized by beat-up buildings housing dingy food/convenience stores and the like, the part of Franconia I was in looked like one those run-down, sparse towns you’d normally expect to find on the set of an old Western. It proved the perfect locale for The Dutch Treat, a dive reminiscent of the first Porky’s film that boasted the kind of clientele you’d expect. On this special night, The Dutch Treat was the site of a live music show commemorating the 20th anniversary of the death of America’s favorite New Hampshire-bred outlaw feces chucker/muncher, Kevin “GG” Allin.

Now, if you’re completely unfamiliar with GG, this blog is not the place to go for an introduction. First, take a trip to YouTube to see his many controversial television appearances or live performances. Then, dive into Todd Phillips’ infamous 1994 documentary Hated: GG Allin and the Murder Junkies for a more in-depth look into GG’s short life – an explosive run cut short when he checked himself out with a heroin overdose on June 28, 1993 at the age of 36.

Since GG’s death, his last backing band, The Murder Junkies, has soldiered on under the direction of GG’s older brother (and frequent collaborator) Merle. These days, the all-important singer position is filled by a skinny-yet-intimidating growler by the name of PP Duvay. The band was headlining the affair with two sets, and I couldn’t wait to see what would happen.

Like all rednecky Rockers I’ve encountered over the years (C.O.C., Weedeater, Down, etc.), all four members of The Murder Junkies were laid-back, polite and cool. Guitarist Sonny Joe Harlan was the most affable of the bunch, chatting me up about the great Lynyrd Skynyrd when he saw that I was wearing one of the Southern Rock band’s t-shirts. In addition to boasting a truckload of GG items, the band’s merch table featured an 11-by-17 poster version of the art used for the show’s flyer (pictured above). At $5 a pop, the poster was a steal –and I had to have one. After buying one from Merle, he offered to have the band autograph it.

How in the world could I possibly refuse?


After the three nearby band members signed it (Harlan’s message: “Play some Skynyrd!!”), I walked the poster to the bar in the back to have it signed by one Donald “Dino Sex” Sachs - The Murder Junkies’ masturbation-loving, frequently naked drummer. After taking the marker, Dino proceeded to sign my poster – or at least do something to it – for what felt like 15 minutes. Once he handed it back to me, I was equally amazed and perplexed by the seemingly alien hieroglyphics that now adorned the drawing. These markings were mostly placed within the black border around the art, rendering them readable only when held to the light. (Perhaps I’ve discovered a new party game for guests: “What Did Dino Write?” Kinda like charades, but inspired by a mental patient.) Oh, and he also drew a dick on GG and wrote #1 above it. In addition to signing his own name, Dino was also kind enough to sign for other folks who weren’t able to make it, like Hank III and Jeff Clayton of Antiseen. 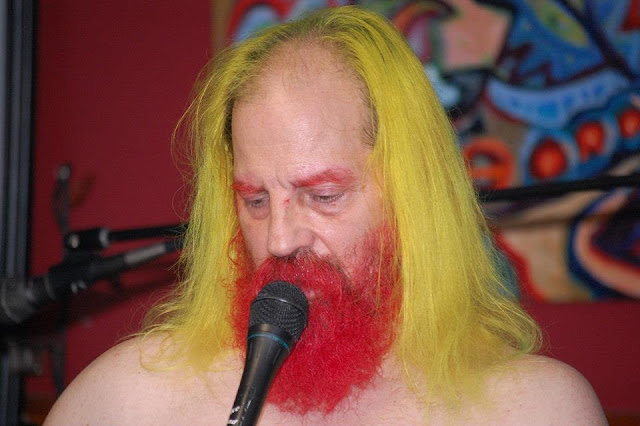 Although Dino didn’t strip naked at The Dutch Treat, he did offer a few words about GG prior to the set. (At least I think that’s what he was talking about.) His monologue was followed by an appearance by GG’s elderly mother Arleta, who thanked the crowd while wearing a shirt with a picture of sweet baby Kevin on the john.

The Murder Junkies’ set ranged from songs from the band’s post-GG career (including tracks from this year’s A Killing Tradition album) to such cherished GG chestnuts as “Dog Shit” and “Expose Yourself To Kids.” Naturally, tunes like these brought out some of the hardest, most intense-looking people I’ve ever seen at a show. Memorable audience members included a guy bashing his glass beer bottle on the table in time with the music and a shirtless, drunk, angry, at least 350-pound gentleman slamming his arms and elbows into anyone standing in his way – female or otherwise. Naturally, this didn’t slow down any of people knocked over in his path, as they immediately got up to further partake in the drunken, filthy fun.

As soon as the last note of the first set rang out, a visibly exhausted PP limped to the door as blood ran from his forehead. A few minutes later, a fellow showgoer told me that PP broke some of his ribs at the band’s show earlier in the week and was still recovering. Goddamn!  Before long, PP and the rest of The Murder Junkies were back for their second set, although travel commitments for the following day forced me to leave the show during Dino’s drum solo.

While no excrement was thrown at the show (at least while I was there), it appeared that everyone still had an absolute ball. The Murder Junkies were great, the crowd got off on the tunes and the energy in the room was real. Hell, at least you walk out of a Murder Junkies show never forgetting the band. The same can’t be said for the majority of groups wasting their time and ours these days. And while Dino is a perverted clown who should probably be in treatment, he’s still one talented motherfucker on the drums, as evident on his surprisingly intricate playing on “Chicks Can’t Rock” off A Killing Tradition.

(By the way, it’s important to note that GG wasn’t a slouch in the musicianship department either. His Jazz-colored drumming circa 1977 with his first band Malpractice is even more impressive when considering he was barely in his twenties at the time, while the music he did with The Jabbers in the late ’70s/early ’80s remains some of the finest Punk ever conceived in New England.)


Twenty years after GG took his final dump, The Murder Junkies celebrated his life the honorable way: No pretense. No posing. Just good old fashioned, offensive Rock ‘N’ Roll. I’m sure GG was there in spirit, checking out the festivities with a proud, shit-eating grin.