Crazy Rhythms Fade Away: The End of Maxwell's 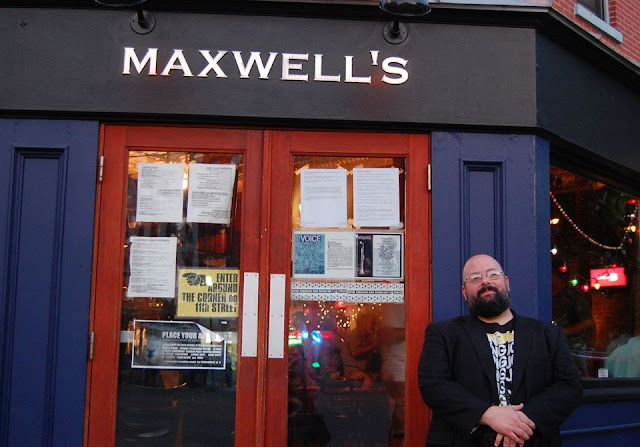 Yes, that’s me standing outside of Maxwell’s in Hoboken, NJ on a hot July night. And although you can’t see it too well in the pic, I’m holding the Maxwell’s t-shirt I bought earlier in the evening. I know…very touristy, right? Well, even though I live up in New England these days, I’m originally from the Garden State and spent a good chunk of my musical existence circa 1998-2003 at this amazing place. In all the years I went to Maxwell’s, it never once occurred to me to get a picture taken there, let alone get a shirt. Why? Because I always took Maxwell’s for granted. Sure, virtually every other NJ/NYC venue I loved to frequent (CBGB, The Pipeline, Connections, Wetlands, Coney Island High and many more) bit the dust, but Maxwell’s was always there. How could it possibly go away? But there I was on July 6, standing outside Maxwell’s with a lump in my throat as my wife Shannon snapped a picture after our five-hour drive to New Jersey. It was time for me to say my farewell to the site of some of the most important nights of my life.

Although I missed out on the club’s legendary ’80s era with original owner Steve Fallon, I sure made up for lost time when Maxwell's re-opened in 1998. Attending Montclair State University in the late '90s/early ’00s, I regularly made Maxwell’s my hangout when I needed to get away from studies and take in great music. It was also the place I took friends who normally didn’t like music clubs, as the restaurant and the always-friendly crowd made it a nice alternative to the usual routine. I had more than a few dates at the place in my single years. When I returned to New Jersey in 2006 after a three-year run in Los Angeles, it didn’t take long before I was back at Maxwell’s.

The years and memories blur quite a bit, but here is a small sampling of highlights that immediately come to mind:

* Jim Thirlwell’s paint-peeling performance with a particularly menacing incarnation of Foetus. He didn’t utter a single word to the audience between songs. As captivating as it was intimidating.

* The Januaries bringing songs from their brilliant (and criminally overlooked) 2000 self-titled album to life on the Maxwell’s stage.

* Tiny Masters of Today, fronted by two pre-teen siblings, rocking it hard with Russell Simins from The Jon Spencer Blues Explosion on drums.

* Agnostic Front’s Roger Miret getting his Pop on as the bassist for Lady Luck.

* Having a cigarette outside the club on New Year’s Eve 2007 when a very friendly Dean Wareham (Luna/Galaxie 500/Dean And Britta) walked over, introduced himself, shook my hand and proceeded to have a nice chat with me. Usually, the fans introduce themselves to the artists - not the other way around! A decent fellow - and Dean and Britta were stunning that evening.

* Every Dirtbombs show I ever saw there. (Three cheers for Mr. Troy Gregory!)

Like countless others, I was knocked over by the announcement that Maxwell’s would be closing at the end of July. With a trip to New Jersey already planned for July 6th to visit with friends earlier in the afternoon, I checked the Maxwell’s website to see who would be playing on that date.

It was The Feelies.

Growing up an underground music fan in New Jersey, I was exposed to The Feelies’ music at an early age. After reading about the Haledon-born band in the East Coast Rocker while still in grade school, I tracked down a used copy of their classic 1980 album, Crazy Rhythms. Nearly 25 years later, that album is still on my Top Ten Favorite Albums list. In fact, Crazy Rhythms has the distinction (alongside only The Pixies’ Surfer Rosa) of being The Album That Got Me Through High School. And I could go another 10 blogs on how much the rest of their discography (especially 1991’s Time For A Witness) means to me.

So, yeah, the idea of seeing The Feelies’ last-ever show at Maxwell’s was quite appealing to me - especially since fate had never allowed the band and me to be at the same place at the same time before.

Boasting the same lineup they’ve had since at least 1984, The Feelies far exceeded my decades’ worth of expectations. The band’s immaculate song list (comprised of two sets and numerous encores) included tracks from each of the band’s five albums (with Crazy Rhythms’ “Original Love” and “Raised Eyebrows,” Only Life’s “Deep Fascination” and Time For A Witness’ “Invitation” being personal highlights) as well as faithful covers of The Velvet Underground’s “Who Loves The Sun,” The Beatles’ “Ticket To Ride” and a slew of other classics. (Since other commitments prevented me from staying beyond midnight, I reluctantly missed the band’s renditions of The Stooges’ “I Wanna Be Your Dog,” The Stones’ “Paint It, Black” and another 10 or so cover/original tunes. Amazingly, they had already played 30 songs by the time I left!)

As much as I adore The Feelies’ albums, the band was even better live – and that’s after doing this for nearly four decades. Just perfect. Seeing this extraordinary band on this stage on this night was the very definition of bittersweet.

The live photos in this post were the best of the batch I took while working my way around the dancing of an enthusiastic capacity crowd. In addition to the three members photographed, The Feelies are rounded out by drummer Stan Demeski (Luna) and percussionist Dave Weckerman (formerly of the Electric Frankenstein offshoot band High School Sweethearts). Guests at the July 6th show included John Baumgartner and Toni Paruta of Speed The Plough and even Haledon Mayor Domenick Stampone, who introduced the band’s second set of the evening.

If you’re new to The Feelies, most of their back catalog (as well as a pretty nice bio) is available HERE. Their music is as great as it gets.

Not surprisingly, the sadness kicked in the second I stepped out of the club for the last time. It’s still hard to take as I write this two days later. A few weeks ago, I was feeling especially maudlin while talking with a friend about the club’s imminent demise and “the temporary nature of things.” When he heard those words, my friend chuckled and said, “It’s been there for more than 30 years! Everything has its time.”

He’s right, of course. I’m just thankful I got to spend so much of my time at Maxwell’s.