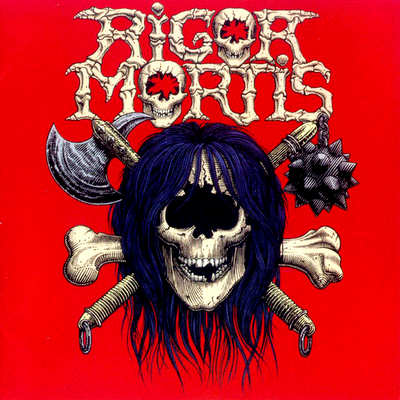 Way back in 1988, I was listening to a cassette of the soundtrack to a movie called The Decline Of Western Civilization Part II: The Metal Years for the first time when I heard a song that stood out like a sore thumb. Towards the end of Side Two sat “Foaming At The Mouth,” a punishing aural assault courtesy of a Texas Thrash band called Rigor Mortis. Although the soundtrack featured heavyweights like Megadeth and Armored Saint, nothing touched Rigor Mortis on this soundtrack in terms of sheer brutality.

Spread that intensity over 40 or so minutes and you have Rigor Mortis’ self-titled debut album, released 25 years ago today on (get this!) Capitol Records. Aside from the Big Four, very few bands from the genre ever made it to the majors – and certainly not with music this raw. Sure, Testament and Overkill were well out of the indie league by ’88 as well, but they were fucking lightweights compared to Rigor Mortis. Those who own this album know what I’m talking about. (Songs called “Re-Animator” and “Bodily Dismemberment” released by the same label that put out The Beatles? Yup.)

The first time I heard this album, I was immediately blown away by the shredding of guitarist Mike Scaccia. No, this wasn’t the kind of show-off glitz and glam displayed by Yngwie Malmsteen; this was twisted, downright evil playing by someone with a hummingbird from Hell for a picking hand!

Rigor Mortis was not only a powerful Metal album, but also the recording that birthed a hybrid genre of music that would help define the ’90s.

Wait…what? Let me explain. The album’s producer, Dave Ogilvie, also happened to be Ministry’s sound engineer around this time. Through this connection, an impressed Al Jourgensen pitched Scaccia the idea of adding his unique guitar style to the Ministry sound.

This union changed fucking everything.

When considering Ministry’s musical output since 1988, most hardcore fans usually place it into two categories: Paul Barker and Post-Paul Barker. However, I would argue that Mike Scaccia had just as much to do with the development of  Ministry’s sound in the ’90s - and the commercial  success that welcomed the band - as Al and Paul did. Play Psalm 69 - Ministry's biggest record - and you’ll hear for yourself how vital Scaccia’s presence was to this band.

Take a listen to Psalm 69’s “TV II” and Rigor Mortis’ “Shroud Of Gloom“ back to back. I rest my case.

Rock was already inching its way into Industrial music by the late ’80s/very early ’90s thanks to tunes like KMFDM’s “Godlike” and even Ministry’s own “Stigmata,” but Scaccia took the combination to the next level. The man helped to re-shape an entire musical form– not a small feat by any means. And Rigor Mortis is the album where his journey - and the journey of millions of Industrial Metal fans - began.

It’s a shame that Mike didn’t live to celebrate this milestone today. My thoughts go out to his wife, kids and former bandmates.

The remainder of 2013 promises to deliver more Mike Scaccia to the world in the form of Ministry’s Enjoy The Quiet - Live At Wacken 2012 DVD and From Beer To Eternity album. As far as I’m concerned, keep Mike’s music coming forever.

If you’ve never heard Rigor Mortis before, the band is currently selling copies of the 2003 CD reissue of the album HERE. It is a crucial addition to any serious Metal fan’s collection.

Now, if you’ll excuse me, I have an album to blast and an innovator to honor.