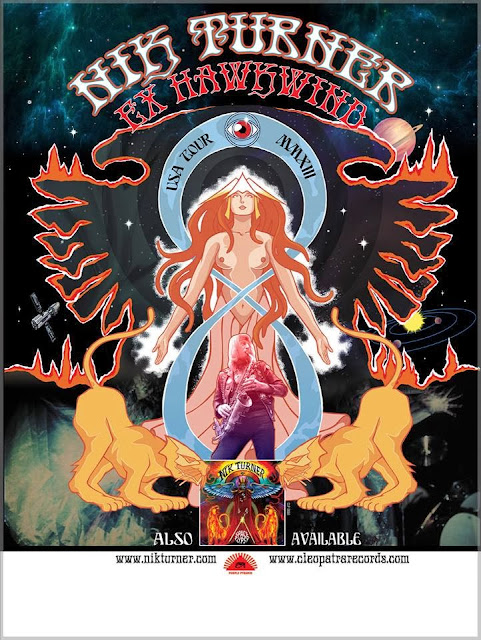 First of all, I have no bloody idea what the band that headlined the October 29 show upstairs at the Middle East in Cambridge, MA was actually called. The awesome promo poster for the tour (featured above) proclaimed “Nik Turner” with “Ex Hawkwind” underneath, while some outlets (including Turner’s own website) had the band listed as “Nik Turner’s Space Ritual.” However, those who went on the club’s website prior to the gig read the words “Nik Turner’s Hawkwind,” which were also the words written on the showtime notice inside the club. This moniker maelstrom – as well as the presence of Hawkwind CDs at the merch table – certainly didn’t help to clear up confusion over who officially owns the name “Hawkwind” in the states these days. (You can read more about that HERE). While this sort of stuff creates work for lawyers and gossip for passionate fans, all that really mattered on this busy Boston evening was that the great Nik Turner had arrived from the outermost reaches of the universe to blow minds with music.


Armed with a strong backing band that included frenetic UK Subs legend Nicky Garratt (who brought loads of onstage energy despite looking like he fell out of bed 30 seconds before the gig), Turner amazed with a selection of inspired recent material and Hawkwind mainstays. Current tunes like “Fallen Angel STS-51-L” off his new solo album Space Gypsy flowed effortlessly with classics like “Silver Machine” and an especially riveting rendition of “Sonic Attack.”


There are people who play music, and there are people who live to perform it. All it takes to immediately know the difference is to watch Nik Turner wail on his sax, fly high on his flute or approach the mic with otherworldly spoken word.

It was clear by Turner’s wide smiles between (and during) songs that the stage is still where he belongs after 40-plus years in the game. If there is a jaded molecule in Turner’s 73-year-old body, it certainly wasn’t revealed on this night.

Following the show, Turner entered the crowd to converse with anyone who wanted a bit of his time. (“I’m here to serve you!” he joyously exclaimed from the stage). And considering that Turner and co. have been crashing at people’s houses during this current North American run, it is very possible that at least one audience member got far more than a post-show autograph and handshake out of the deal.

While Turner’s brand of punky psychedelia may not be everyone’s cup of mushroom tea, he remains the embodiment of communal, free-spirited ’60s hippie culture without an ounce of artifice or insincerity. It’s hard not to love him.