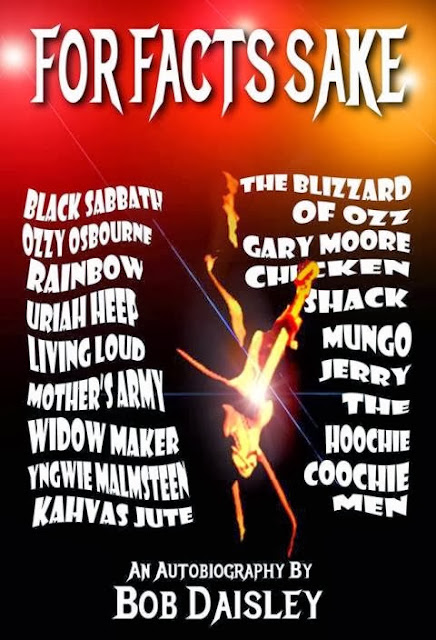 In a career that has spanned five decades, Australian bassist extraordinaire Bob Daisley has worked with some of the most legendary names in Hard Rock and Heavy Metal. Rainbow, Uriah Heep, Ozzy Osbourne, Black Sabbath, Gary Moore, The Hoochie Coochie Men and Chicken Shack are just some of the many artists who’ve benefited from Daisley’s playing and/or songwriting talents over the years. Now, Daisley shares his life story with fans via his recently published 325-page autobiography, For Facts Sake.


Fueled by an extensive diary that Daisley has kept since 1976, the book presents some of the most in-depth stories about Metal’s greatest legends ever committed to paper. These remarkable tales are fleshed out by hundreds of rare photos and graphics from Daisley’s personal archives. Treasures displayed in the book include Daisley’s handwritten lyrics to the final verse of “Crazy Train” and never-before-seen shots of the late Randy Rhoads.

Even without these amazing images, For Facts Sake would still succeed in telling a compelling story of a man who has spent nearly his entire life in the music industry. After cutting his teeth in a succession of groups as a teen, Daisley got a first real taste of the Rock ‘n’ Roll life as a member of the Australian group Kahvas Jute, who released the album Wide Open in 1970. Daisley followed Kahvas Jute with stints in England in Stan Webb’s Chicken Shack and jugband-turned-rockers Mungo Jerry before joining forces with Hawkwind’s Huw Lloyd-Langton and Mott the Hoople’s Ariel Bender in the raucous Widowmaker, a combustible unit destined to implode after two albums. From there, he went to play with Ritchie Blackmore’s Rainbow. Unlike some musicians who’ve worked with the temperamental guitar god, Daisley got on well enough with Blackmore to offer some kind words about him in the book.

“I never had a problem with him,” he says. “He could be moody and difficult, but I put me head down and got on with the job. When I did that, he was fine. Ritchie and I also spent a lot of time together away from the band. If my wife was around and his girlfriend was around, we’d all go out to dinners together when I first joined the band in LA. It wasn’t just a job; there was a friendship there.”

Following his exit from Rainbow, Daisley joined forces with Osbourne to create the band The Blizzard of Ozz with then-unknown guitar genius Randy Rhoads. After an arduous audition process, the trio settled on Uriah Heep drummer Lee Kerslake, who has remained Daisley’s close friend and frequent collaborator for more than three decades.

(Click on the player below to listen to Bob discuss Lee Kerslake's arrival in the Blizzard of Ozz.)

“Ozzy’s not technically a great singer, but he’s got character in his voice and he doesn’t sound like anyone else,” Daisley says. “I always liked his approach because it was unpretentious. He wasn’t trying to impress you with his singing or be a rock star. He was just singing, and that’s one of the main ingredients of what makes him who he is.”


The Osbourne/Rhoads/Daisley/Kerslake lineup created 1980’s Blizzard of Ozz and 1981’s Diary Of A Madman, easily two of the most cherished albums in Heavy Metal history.

“It’s amazing now that we can look back and know that those albums are iconic and people hold them in reverence,” reflects the bassist. “But for us then, it was just about putting the band together and playing some music.”

Unfortunately, those two albums have also come to symbolize Daisley’s discontent with Ozzy and his manager wife, Sharon. A good chunk of For Facts Sake involves Daisley’s continual efforts to get paid for the work he did for and with Ozzy, which often resulted in acrimonious spats with the singer and his spouse. In 2002, revised versions of both albums – featuring newly recorded bass and drums tracks by Ozzy’s then-current rhythm section – suddenly appeared in the marketplace, replacing the incomparable original incarnations on the shelves. Daisley maintains that the recordings were changed to prevent him (and Kerslake) from receiving proper royalties.

“The first time I heard the new recordings, I laughed and said, ‘This is a fucking joke!’” he recalls. “I didn’t realize at the time that the originals had been taken off the shelves and people didn’t have a choice.”

After years of on-again/off-again bust-ups and reconciliations, Daisley stopped working with the Osbournes for good by the mid 1990s. Considering his difficult history with the duo, it comes as little surprise that he has more than a few thoughts on the current controversy surrounding estranged Black Sabbath drummer Bill Ward – particularly Ozzy’s questionable insistence that Ward was unable to fulfill his obligations to the band due to weight gain and overall bad health.

“I don’t think Bill’s been treated fairly at all, and I don’t think all the stuff they’ve been putting in the press is fair or true,” Daisley shares. “It’s obvious that it’s some kind of cover-up and excuse, isn’t it? Even people in forums have been making comments along the lines of, ‘Why don’t you tell the truth? You stiffed Bill on bad contracts. Stop making up bullshit about him.’”

Despite his troubled history with Ozzy and Sharon, Daisley makes it a point to end For Facts Sake on a positive note, delivering a personal message to the Ozzman: “We must fight all the hate.” Nearly 20 years after walking away from Ozzy’s business world, would Daisley ever consider working with the Prince of Darkness again?

“It’s silly to ever say never,” he replies. “I would say at this point it’s not likely. I don’t hate them...I would never say never. I enjoyed working with Ozzy, and I know for a fact that he enjoyed working with me, which is why we used to come up with good stuff. There was a real genuine camaraderie between us. It would be absolutely nice if we could put all that business stuff aside and just look at the friendship and the personal side of things and create again. I’d love that.

“Who knows who’s going to die next,” he adds. “It could be him; it could be me. But before either of us goes, it would be nice to be able to round it off and say, ‘We did one more thing together before one of us dies.’”

Sadly, Daisley’s process in creating For Facts Sake coincided with the passing of many musicians from his past. In addition to saying goodbye to Widowmaker’s Huw Lloyd-Langton, Rainbow’s Ronnie James Dio and Deep Purple keyboard legend/ Hoochie Coochie Men contributor Jon Lord since starting work on the book in early 2009, Daisley faced the unexpected death of dear friend Gary Moore in February 2011.

“I respected him as a musician way above probably a lot of people I’ve worked with,” Daisley says. “Gary was definitely one of the best ever. He was such a brilliant and clever player, and really played with soul, feeling and emotion. I got on with him so well; we used to have such a good laugh. He had a great sense of humor; he and I had a similar kind of wit. Sometimes, it would go over people’s heads and we’d be the only ones getting the joke. We were very close like that. I enjoyed working with him musically, and I enjoyed his friendship.”

Not surprisingly, For Facts Sake is full of great stories involving Moore, including the time Daisley stepped in to play bass in an ad-hoc version of Thin Lizzy featuring Moore, Scott Gorham and Brian Downey at the Self Aid concert in 1986 shortly after the passing of Lizzy founder Phil Lynott.

(Click on the player below to listen to Bob discuss his friend, Phil Lynott.)


Away from music, For Facts Sake explores Daisley’s longtime struggles with Depersonalization, a psychological condition characterized by a feeling of detachment or estrangement from one’s self, resulting in the sufferer feeling like he or she is experiencing the world through a dream.

“When I was a kid and first hit with it, there wasn’t a term for that,” he recalls. “You could try to explain what it was to a doctor or a therapist or whoever it was you went to see, and they really didn’t have a clue what you were talking about. Not only did I not get answers, they didn’t understand the questions! It wasn’t until four or five years ago that I saw that film Numb and started reading some of the books about Depersonalization that I realized what it was.”

As chronicled in For Facts Sake, Daisley’s first bout with Depersonalization came at 16, during a particularly stressful period of time exacerbated by a back injury.

“That’s an age when it’s apparently common for people to get hit by it, possibly because of so many hormonal changes affecting you emotionally and mentally,” he explains. “Plus, I had the injury and all sorts of shit going on in my life that didn’t help, and I think they were all contributing factors. It is more common than people realize, and it’s certainly way more common than I realized at all at that age. I would imagine that a lot of people think they’re the only ones experiencing it when they first get hit with it, and it is a horrible feeling. People commit suicide because of it – and that’s not the way to go.”

For Daisley, the way to go in dealing with Depersonalization is to share his experiences with others. In addition to discussing the disorder at great length in For Facts Sake, he contributed a piece to Jeffrey Abugel’s book Stranger To My Self: Inside Depersonalization - The Hidden Epidemic. In his essay, Daisley details how his trials and tribulations with Depersonalization inspired the lyrics to the legendary Ozzy Osbourne track, “Diary Of A Madman.”

Nearly 50 years after his first encounter with the condition, Daisley continues to rise above it and enjoy a productive life. That said, what is the best advice he’d offer a young person experiencing it for the first time?

“Do as much research as you can, stay away from drugs and read the books about the condition,” he replies. “It does come in waves of strength. If you’re in a threatening, depressing or worrying situation, it tends to come on a little bit stronger. But it does ease off from time to time. I think it’s always at least slightly comforting to know that it’s not just you, and a problem shared is a problem halved.” (More information on depersonalization is available at www.depersonalization.info/overview.html.)

With For Facts Sake setting many records straight while entertaining fans in the process, Daisley finds himself truly proud – and a little amazed – to finally see his life and work represented in his own words. And what a journey it has been.

“Some days, I would be sitting there typing away and laughing out loud because it was just funny stuff,” he says. “Other days, I’d be typing and the tears would be streaming down my face because I’d be writing about a tragedy or the loss of someone. There were plenty of emotional roller coasters with it. But at the end of it, I kind of looked at it and thought, ‘Fucking hell, did all this happen to one person?’”


For information on how to order For Facts Sake, please visit Bob Daisley’s official website at www.bobdaisley.com or email webmaster@bobdaisley.com.