Dave Ingram Takes Us Down Among the Dead Men 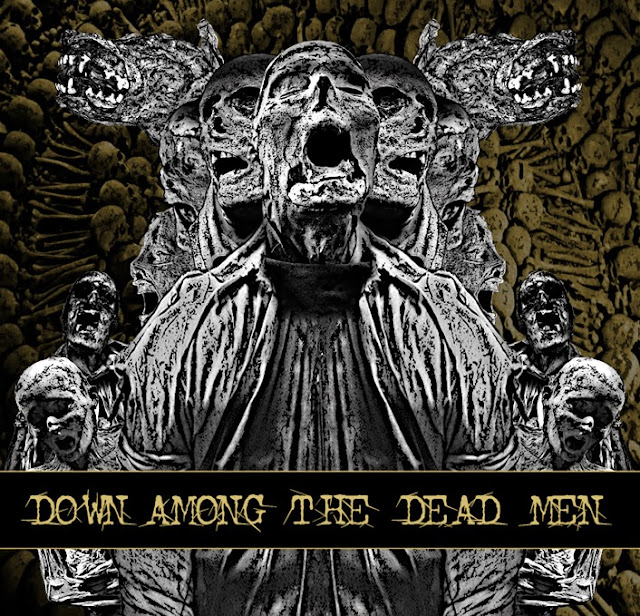 For nearly 25 years, Dave Ingram has stood as one of the definitive vocalists in Death Metal. Best known for his eight-year stint as frontman for Birmingham legends Benediction (replacing Napalm Death-bound singer Mark “Barney” Greenway in ’90) as well as his performance on Bolt Thrower’s 2001 album Honor-Valour-Pride, Ingram has spent recent times exploring the world of Internet radio with “Metal Breakfast Radio” (with co-host Donovan Spenceley) and the Swing/Big Band-oriented “Lambert’s Basement.” Now, he is ready for a new chapter in his musical life as frontman for Down Among The Dead Men.

A collaboration between Ingram and Rogga Johansson (Paganizer/ Fondlecorpse/ Ribspreader/ Humanity Delete/ The Grotesquery), Down Among The Dead Men are about to deliver one of the year’s most brutal albums with the November 22 release of their self-titled CD on Germany’s Cyclone Empire. From the Crust-Punk rage of “A Handful of Dust” and blast beat battering of “Bones of Contention” to the midtempo tantrum of “Venus Mantrap,” there is not a single note on this album that doesn’t go for the throat. It’s even more intense than Anselmo’s new record. Just think about that for a minute.

Like many of today’s musical outfits, Down Among The Dead Men was born out of social media.

“Rogga first wrote to me on Facebook asking if I would like to perform on a track for one of his personal projects he was doing,” Ingram recalls. “Being the curious type that I am, I went and looked him up online and found he owned a resumé of absolute immense proportions. I’d heard of - and was a fan of - many of the bands/projects he had been involved in, so I heartily agreed with working with him. As I was putting the lyrics together for this one song, I began to mull over the idea of doing a project together, so I wrote and asked if he was interested. As he’s a fan of my work in both Benediction and Bolt Thrower, he thought it an opportunity that wasn’t to be missed. We brainstormed via email for a couple of weeks, and Down Among The Dead Men was born.”

“I didn’t actually hear Erik’s drums until the album was finished, unless you want to include the click track under the rough mixes so I could write the lyrics to the songs,” Ingram says. “In truth, I was very surprised at how close to my description of ‘Power Punk drums’ he got; in fact, he bloody nailed it! The drums were the only thing I had concerns over, since I wasn’t able to be there during the recording. Once I put the album on,  I had any fears dissolve away swiftly. Erik, under Rogga’s supervision, did a sterling job!”

With Johansson and Blomberg recording in Sweden and sharing guitar and bass duties, Ingram recorded his vocals in Denmark. Despite the band members working separately, the album came together easier than Ingram had originally anticipated.

“I think that the short time span in which the album was written, recorded, mixed and ready to go was incredible,” he says. “The day I received the tracks was the day that Donovan and I were moving our studio. Therefore, I had nowhere to record the vocals until we were moved in. It was actually beneficial, as I managed to make a vocal booth for recording out of all the moving boxes when we arrived at the new premises. The phrase ‘needs must when the Devil drives’ was used that day, and a most satisfying one it was, too!

“I can truthfully say that the entire project has been a lot of excellent ideas by band members, artists and studio/mastering folk that were executed swiftly so as not to let them sit around and go stale, or let someone else move on them before us,” he continues. “Additionally, if you’d have told me eight months ago that I’d write and record an entire album and have new material waiting in the wings less than two months before the debut was out, then I’d have called you nuts - or that you were very, very enthusiastic.”

From the second Down Among The Dead Men begins to assault your eardrums, it is obvious that Punk played a crucial role in the development of the band’s sound, making for a listening experience that is as much Discharge as it is Deicide.

“I’ve been wanting to do a Metal and Punk crossover for a very long time,” Ingram explains. “The raw energy of Punk, along with its simplistic riffing style, fits harmoniously together with the crisp crunch of Death Metal, especially if there’s a Scandinavian edge to that Metal, too! It seems hard to swallow, but Down Among The Dead Men have captured the sound I had in my mind for the project perfectly. I know the band will evolve, as we’re writing new material already, but we’ll also keep to the same style as well. I’ve already got a piece of music I’m currently working on, while Rogga has already written and sent me some more tracks to write lyrics for. Being this productive in such a short time is gobsmackingly brilliant for me. Geronimo, I say!”

Dead Among The Dead Men is also a bit of a family affair, as Ingram’s 10-year-old son Oliver sings on the band’s eponymous song.

“We had fun recording it - and guzzling several cartons of chocolate milk in the process, which helps give a great ‘gurgle’ to any Death Metal vocalist!” offers Oliver’s dad. “He knows all about the noisy music his dad is involved with. My wife Trille and I recently gave him his first iPhone, and he asked to have Honor-Valour-Pride loaded onto it. He really likes the mid-paced Metal of that one. Additionally, his wacky father is on it. He often tells me he’s been showing his school buddies - and his teachers - videos of my performances from my previous bands on YouTube. I've bought him a guitar and a bass to see what interests him musically, though I have told him, ‘No drums!’ I’ve explained to him my take on a drummer’s philosophy: Spend thousands on a nice, shiny new kit, then proceed to smash it up with two pieces of wood. I’ve never quite been able to comprehend that!”


Down Among The Dead Men is wrapped in striking artwork by Turkka G. Rantanan, who offers imagery akin to a mashup of Crass and Cannibal Corpse.

“We told him the idea behind the name of the band – in a nutshell, it’s closely related to archaeology – and that we wanted the cover to have a similar feel to it as the old Discharge album covers, yet with a modern twist,” offers Ingram. “This also included the liner notes and layout in the booklet, too. He came up trumps and did not disappoint us!”

Anyone who listens to Ingram on “Metal Breakfast Radio” and  “Lambert’s Basement” is surely aware of the man’s love of/obsession with Doctor Who. Unsurprisingly, this devotion to the series had a considerable impact on Down Among The Dead Men.

“The album is out the day before the Doctor Who 50th Anniversary; I am over the bloody moon!” says the Doctor disciple. “Cyclone Empire made it that particular date for the release since I’m such a massive fan.”

It gets even better.

“An acquaintance of mine who is a composer for the show heard a Dead Among The Dead Men track and described it as ‘a wall of energy,’ which was a compliment indeed!”
The band hopes to be performing live dates by the Spring, while Ingram has high hopes for their future.

“We really do want to make this band ‘real’ as opposed to so many ‘Internet projects,’ and our close proximity to each other means we’re eventually going to achieve that,” he says. “For now, we’re a three piece; when we begin plans to play live, we’ll find a drummer and bass player to fill the ranks. Rogga knows a lot of musicians!”

Decades after Ingram first growled on Benediction’s The Grand Leveller, he is still delivering some of the most incendiary sounds in Death Metal. In his mind, what had enabled Death Metal scene to survive - and thrive - for as long as it has?

“Its sheer bloody-mindedness and its bullish sense of survival is the first thing that springs to mind!” he replies. “Obviously, this includes the fact that it’s a vent or an outlet of expression for a lot of folk – not just the musicians, but those listening to it. I use it to decompress often. Metal of all types has always had a dark shadow following it, and I think those often obsidian aesthetics are of interest to a good many people. There’s a lot of prejudice against it, often directed at its use of said dark subjects. But really, who wants to listen to songs about eating your greens or doing the best you can at school? We know these are sensible things to do, so leave us to get on with singing about the bleaker and blacker things in life. It’s fictional and it’s fun.”

More information on Down Among The Dead Men is available at www.darksentinel.dk/DATDM.html.

Dave Ingram is also featured in the book From Satan To Sabbath: The METAL Interviews 2000-2009 by Joel Gausten, available HERE.