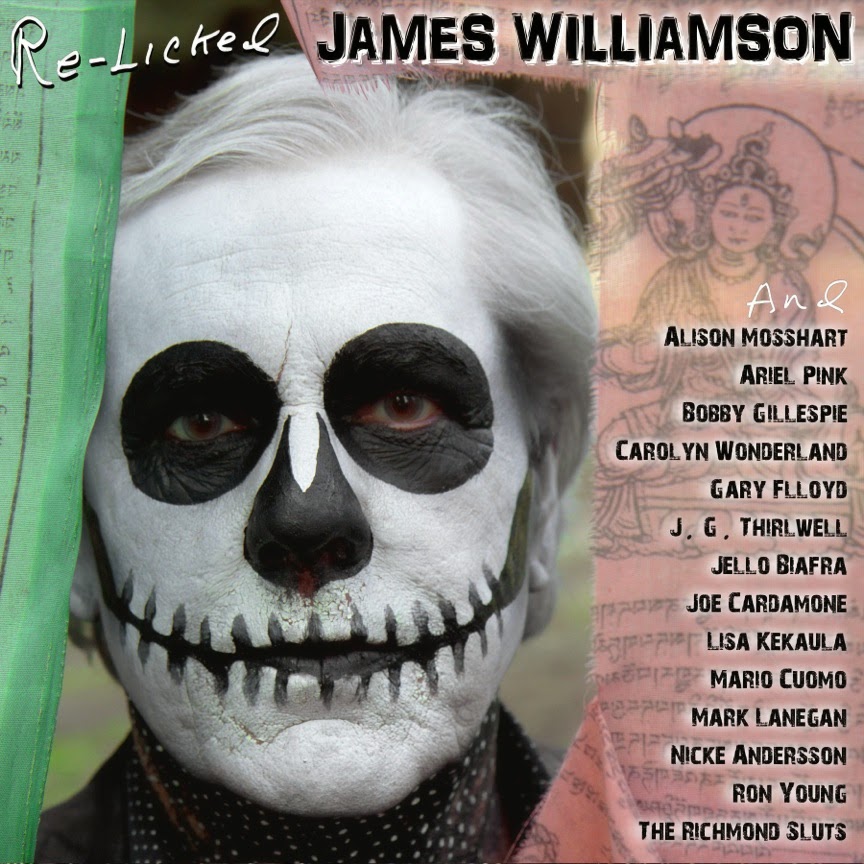 If I'm going to review this album the right way, I need to talk to you, dear reader, in the first person. Receiving a promo copy of James Williamson's Re-Licked last week ended months of feverish anticipation for me. Earlier this year, I had the pleasure of interviewing James shortly before the release of the album's first single, “Open Up And Bleed”/”Gimme Some Skin.” At the time, I was made aware that one of my all-time favorite singers, the great Lisa Kekaula from The BellRays, would be one of the guest vocalists on the project. That was enough to sell me; Re-Licked was already gearing up to be the Album of the Year.

Williamson developed Re-Licked as way to finally record a number of post-Raw Power tracks that he wrote with Iggy Pop in 1973-74. Although these numbers have existed for years on a number of bootleg releases of varying audio quality, Re-Licked represents the first time these songs were given a chance to grow in a legitimate studio setting. How could this not be amazing?

The seven months that followed my chat with James saw Re-Licked – and the Stooges legacy it celebrates – experience considerable highs and lows. First came a press statement from Iggy Pop that seemed to paint a shaky portrait of current relations within the Stooges camp, followed a few short days later by the unexpected death of Stooges drummer Scott Asheton. On a much-needed positive note, the spring and summer brought news of even more amazing performers jumping on board for the album. The list included Gary Floyd (The Dicks/Sister Double Happiness) and J.G. Thirlwell (Foetus) – two people whose onstage brilliance forever elevated my expectations with other live performers.

The presence of musical personalities this strong makes sense. During their all-too-short original late '60s/early '70s run, The Stooges set the benchmark for aggressive, real Rock 'N' Roll. Stooges songs are litmus tests: Not only do you have to be the real deal, but you also have to be on the very top of your game to perform these tunes in a convincing way.

Thankfully, there isn't a single note on Re-Licked that was phoned in. Every person involved in this momentous release clearly grasped the importance of the work being presented. Some highlights: Kekaula is her usual jaw-dropping self on “I Gotta Right” and “Heavy Liquid,” while Wonderland delivers a Joplinesque howl on “Open Up And Bleed.” Young delivers a fantastic Blues-tinged take on “Rubber Leg,” while the rhythm sections of Watt/Dammit and Butler/Urbano (both given the hefty task of honoring the late Asheton brothers) rise to the challenge with admirable aplomb.

Naturally, Floyd is incomparable on a blistering “Cock In My Pocket,” while Biafra is Biafra on “Head On The Curve.”

As far as the singers who come closest to mirroring Iggy's snarl and charm, full marks go to Thirlwell (the album's second version of ”Rubber Leg”) and Cardamone (“Pinpoint Eyes”), while Pink adds a touch of James Brown to his iguana groove on “She Creatures Of The Hollywood Hills.”

Finally freed of the audio crud that plagued the original Stooges versions, the songs that comprise Re-Licked prove that the Pop/Williamson songwriting team was capable of far more than just raw power. Nowhere is this more evident than on the breathtaking (and touchingly sad) “'Til The End Of The Night,” performed here with heartstring-tugging precision by Mosshart.

Of course, Williamson is the greatest star of this show. There's just something about the sound this man gets out of his guitar that....well, if you know, you know. And if you don't know yet, listen to “Wild Love,” “I'm Sick Of You” and the 3:14 mark of “'Til The End Of The Night.” Hell, listen to everything the guy plays on this thing. Few players hit your ears – and your gut – with this level of intensity.

It's fitting and beautiful that quite a few of Re-Licked's participants were either toddlers or not even alive when these songs were written. Their passionate contributions demonstrate how timeless The Stooges' material truly is. For a certain segment of the population, this is our Folk music. And for the guy who's typing this review with a still-healing Stooges tattoo on his arm, having these tunes finally presented with this level of clarity is a deeply emotional experience.

In the words of Scott Asheton, “God loves The Stooges.”

Thank you so much, James. This album means a lot.