In all my years of interviewing musicians, I've never been in contact with such an enthusiastic presence. I literally felt the life jump out through the phone when I spoke with him. More than 400 days clean and sober at the time of our chat in late February, Adler projected the joy and enthusiasm of someone who was finally at peace with his past and ready to take on the future. He's the kind of guy you want to call when you're having a bad day, since his jovial nature has the power to instantly cheer you up and put a smile on your face. While his infectious attitude was a pleasure to experience, the most enjoyable part of the talk was knowing that Adler was alive and well enough to make a phone call in 2015 in the first place.

In honor of his 50th birthday (on January 22), his 30th year as a professional drummer and his current (and hard-fought) stretch of substance-free living, Adler has launched his own fine art series – appropriately named 50 – with the Los Angeles-based visual team SceneFour.

Much like previous SceneFour drum art projects with Bill Ward and Dave Lombardo, 50 was created by having Adler play drums in the dark using an array of drumsticks and rhythmic accessories that produce light, much like a painter utilizing brushes and oils. The movements featured within the captured rhythms were then studied and developed into abstract artwork. For 50, Adler played along to the entire Appetite For Destruction album as well as “Civil War” off Use Your Illusion II and “Reckless Life” off Live ?!*@ Like a Suicide. Each song is represented by its own art piece in the collection.


“I had no idea what I was going to see, but once I saw all the emotion and the anger and the excitement of the songs, it was just amazing,” he says. “I was and am still very excited to be a part of it. If you're a big fan of GNR and Appetite, this is the perfect collection for you.”

The release of 50 is the latest in a series of positive events that are shaping a thrilling era in Adler's life. Not only is he pleased to have such a cool project to commemorate being 50 (which we both agree is at least 250 in Rock Star years), he is finally facing his days stone cold sober.

“It's amazing!” he proclaims. “I wish I was capable of doing this 25 years ago. Unfortunately, I was going through this whole resentment phase for 25 years, and I couldn’t break out of it. But once I learned how resentment is the strongest form of self-abuse, and figured out how not to do it, everything in my life changed. No more taking things personally and no more making assumptions - and always doing my best. Not less and not more – just my best.”

Adler credits his wife, Carolina, for being a constant source of patience, inspiration and understanding.

“My wife has been so wonderful,” he says. “I go to AA, but she's been going to Al-Anon for the last eight years just trying to figure out how to deal with me and still be a part of my life. I love and respect my wife more than anything, and she's been a huge part of me getting sober, me being able to do this art and me being able to basically do anything again. She's my Number One fan, and I'm her Number One fan.

“It's been a fabulous year!” he adds. “I feel like what I felt like when I was a teenager, when I was full of excitement and just ready to take on the world. It's so great to have this rebirth, because I missed out on 25 years of my life. I'm not going to let that happen anymore. From now on, I'm getting everything I can out of my life. And this artwork is part [of that].”


In addition to his better half's unwavering support, perhaps the biggest key to Adler's recent success at sobriety was repairing his relationship with his childhood friend, Slash.

“I had all these resentments towards him because he was a part of [Guns N' Roses] getting rid of me [in 1990],” he shares. “We grew up together, and we accomplished our dreams. We've known each other since we were 12 years old. From the second we met each other, that was our dream – to become successful, travel the world, sell millions of records, make out with all these girls and party. Our dream came true, and I resented that he didn't stick up for me. But then I realized everybody was in a bad state of mind at that time; nobody could stick up for anybody. It's really great that I have a reasonable amount of sobriety time, and Slash himself has [been] like 11 years sober. Now that I'm [more than 400 days] sober, he's my friend again, and we hang out. I didn't understand why we wouldn't before, but now I do understand why.”

Fortunately, Adler was able to reach this realization while all five original Guns N' Roses members are still alive.

“If I wasn't able to apologize to those guys and make amends, it would have bothered me for the rest of my life,” he says.

The healing between the drummer and his old comrades was helped along in a huge way in 2012, when Adler joined original GNR bassist Duff McKagan, Slash and later members Matt Sorum (drums) and Gilby Clarke (guitar) for a live performance during the band's induction into the Rock And Roll Hall of Fame. As great as the moment was, it was hard to ignore the absence of singer Axl Rose and original guitarist Izzy Stradlin.

Later that year, he released the excellent Back From The Dead album with his new band, Adler. Featuring guest appearances by Slash and current Rob Zombie guitarist John 5, Back From The Dead was musically strong enough to re-launch Adler's career. Sadly, the band only performed a handful of shows before alcohol once again got the better of their namesake.

“I couldn't work anymore,” he admits. “I had to make a stand and say, 'Either I've got to clean up or I'm going to lose everything again before I really even get it going.'”

With those dark times now behind him, Adler looks forward to getting back in action and hitting festivals, casinos and other venues with the band, which currently includes guitarist Lonny Paul, singer/guitarist Jacob Bunton and bassist Johnny Martin.

“People don't want to get me shows that I'm not going to do or do right, so I have to prove myself,” he says. “When you mess up, you've got to prove yourself. It's so exciting being a part of a gang again. I love it! There's strength in numbers, and I love being part of a gang where we all are into the same thing.” 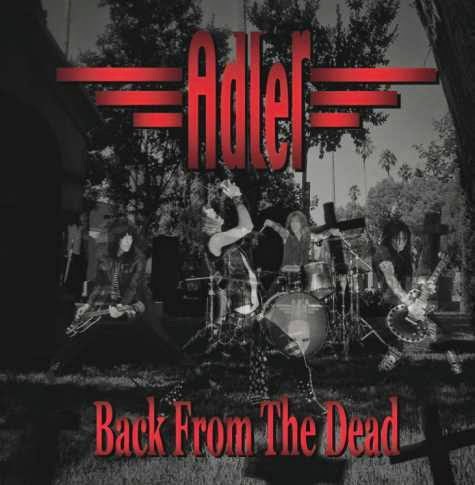 Anyone who experienced Guns N' Roses during the Appetite era knows how incredible that classic lineup truly was. Of course, Adler's swingy, cowbell-heavy style was a major part of the band's power at the time. (Check out a recording of the band's 1988 show at The Ritz in NYC for a great reminder of Adler's impact). And nothing else released in '87 could touch Appetite’s explosive drum sound.

“I told [producer] Mike Clink, 'I want my snare to sound like a machine gun and my bass to sound like a cannon,' and he accomplished it,” he remembers. “Appetite For Destruction was done in six days. We had two songs a day. We only played 'Sweet Child O' Mine' one time; all the other songs, we played two, three, maybe four times. Basically, we just went in there and he pushed 'record.' [Clink] said, 'Are you ready? Count it off.' I said, 'Okay. One-two-three. Let's go!' You can't play a metronome [to that album]; it won't match up because it's all feel. That’s what we felt that day in the studio. What we did is what you get; there were no click tracks or electric drum sounds. It was just what it was, and that's what we wanted. And you can see it in the art. There's so much emotion in those songs that we did in those six days that it actually comes out in the artwork. That's what I wanted, and I'm very happy that I was able to accomplish that.”

Appetite’s enduring status as one of the most successful and influential Rock albums of all time leads to two big questions for its legendary timekeeper: What made that album work? What was the magic that can't be duplicated again?

“Five individuals who were wild children who wanted to do what they wanted to do the way they wanted to do it,” Adler replies. “Nothing was going to stop us. We were going to do it this way or no way. I think what made it happen and be so magical is there's five individuals with five different styles. I liked the Queen and the Pop music and the Kiss. Axl liked Elton John and ELP, and then we got Izzy with The Rolling Stones and Slash with the Aerosmith and Zeppelin and Duff with The Stooges and The Fartz and things like that. All together, it worked really well. That, and me and Duff really worked together so well because he's originally a guitar player. He doesn't play bass like a bass player; he plays bass like a guitar player. That's how I learned how to play drums – with a guitar player, which was Slash. He fit right in perfectly. It was magic; we could do no wrong. Even if we went out of our way to do wrong, God would stop it and make it right. It was just such a wonderful time. Even our worst shows were great.”

Finally comfortable with his past, Adler looks at the days ahead as an opportunity to embrace the life he miraculously still has after decades of near-destruction. While the 50 art series is stunning and unforgettable, the man's greatest work of art is his newfound happiness.

“I live my life one day at a time,” he says. “Right now, I'm doing the best I can to be the most successful person and the happiest person I can be today. Tomorrow, hopefully I'll wake up and say, 'Thank you, God, for a beautiful morning,' and [I'll] keep going on. But right now, my future is wide open.”