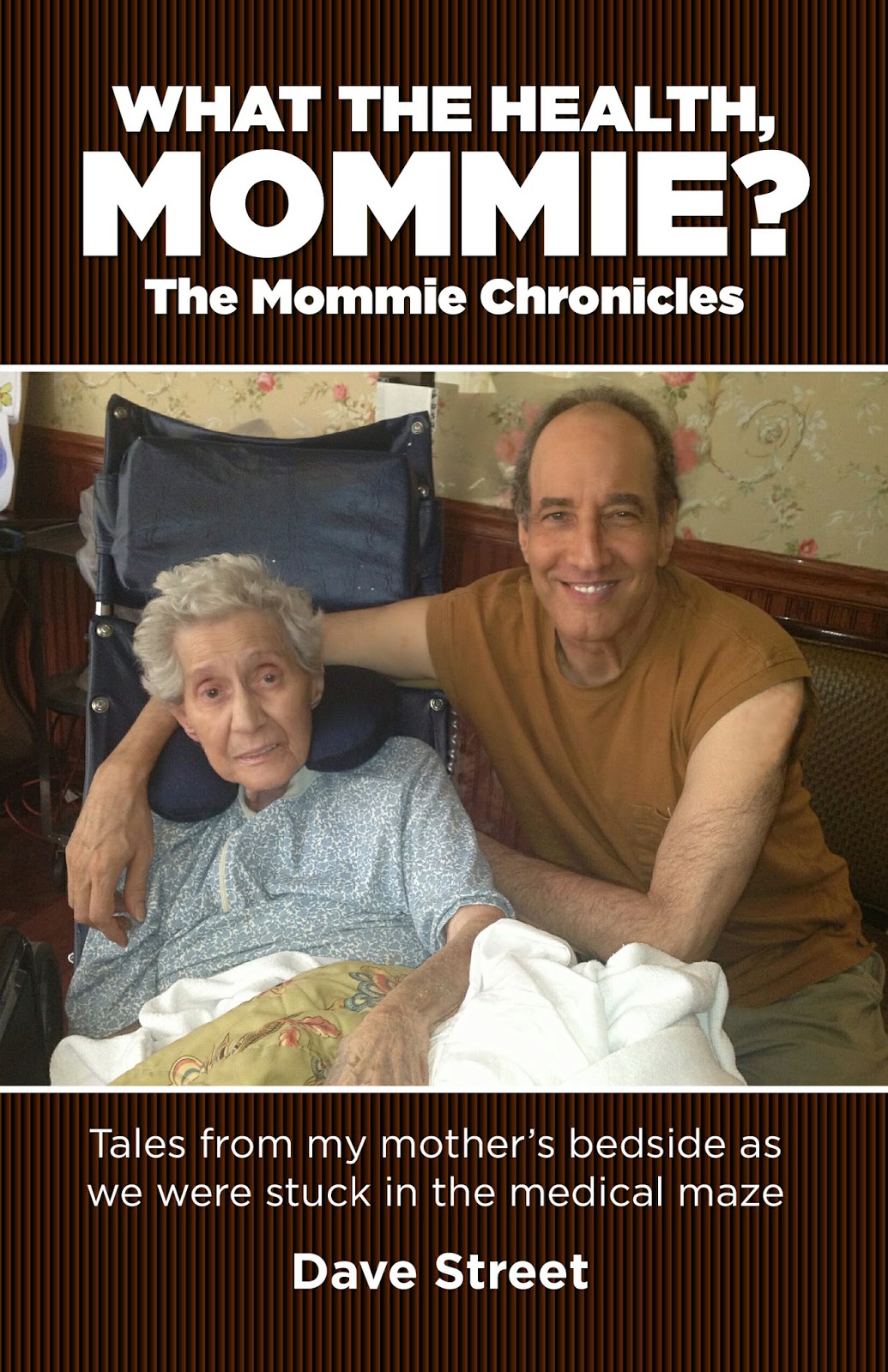 Punk rockers are known for their disdain for the system, but what happens when they find themselves having to utilize it in order to care for an ailing loved one? This is the dilemma at the heart of What The Health Mommie?: The Mommie Chronicles, the new book by NYC Punk mainstay Dave Street.

Known to underground music fans as the one-time manager for The Misfits and the longtime lyricist for The Undead, Street has spent recent years coming to terms with the death of his loving mother, Adele Lichtenstein, and the many struggles he endured trying to work within the American health care system prior to her passing. Self-published late last year as an eBook, the 311-page What the Health aims to inform readers of what they need to be aware of when a loved one faces a lengthy hospital stay. As described on the back cover, “This book takes a close-up look at hospitals, nursing homes and rehabs by someone who was there, as well as sharing warm memories of his mother and the need to appreciate our loved ones while they are alive. The book also offers practical ideas for improving the system – and a Survival Guide for anyone entering a medical facility.”

“I felt it was something I had to do,” Street says of the project. “While I was taking care of my mother, I started posting on Facebook about it. I guess it was for own sanity. I wrote stories about my mother, the things she was experiencing and the ways I was trying to give her comfort. I actually got a little following of people on Facebook who were asking me every day about my mother's status. The book really grew out of those posts.”

Serving as the primary link between his mother and the hospital administering her care, Street soon found himself struggling to maneuver through what he calls “the medical maze” of logistical confusion and nightmarish miscommunication that developed during her final months. As detailed extensively throughout What the Health, Lichtenstein's final months were impacted by a disturbing lack of the human factor needed to provide a seriously ill person with the empathy and understanding they need as he or she faces the end. One day, Street walked into his mother's hospital room “to find her surrounded by an official-looking adult and a group of young people, mostly women, who seemed to be of college age.” In turns out that his mother was being used as a subject of a class for medical students.

“Mom was in her bed, to me looking distraught and withdrawn, like a frightened animal about to undergo laboratory testing,” Street writes in the book. “The experience took about twenty minutes while I was there, after which the class emptied out. But Mom remained in what seemed like a state of silent panic, still and unresponsive. I wanted to scream. I had never given any approval for this to happen, and Mom was certainly in no condition to do so.”

Despite the frustrations he often encountered while trying to help his mom, Street nonetheless empathizes with many of the folks who work in the medical industry – people who often face their own roadblocks in caring for patients.

“You have to understand that the professionals in health care are generally overwhelmed; their workload is usually five times more than any human can take,” he shares. “In general, if we lived in a world where you have a magic wand and you can make it so they can do what needed to be done, then each of their patients would have to be looked at in terms of their own individual behavior and needs. But because of the reality of the system, they're put into categories. 'Everyone with infections gets treated like this' or 'Everyone with a heat murmur gets treated like that.' If they had talked to me and asked me, I could have provided insights into my mother's life and about things she responded to that I think would have helped her. But it didn't seem they had the time to do that.”

Along the way, Street and his mother both found tremendous solace in the healing power of music.

“At one point, it became clear to me that my mother was going to be kind of an invalid in bed, even though I wished she would have gotten up and come home with me,” he recalls. “My focus changed to how I can give her comfort and how her days could be happier. She always used to like to listen to music, so I decided to put together 'YouTube concerts' of her favorite songs. I knew right off that her favorite music was Frank Sinatra. The first thing I did was put together a loop of Frank Sinatra videos. When I first starting playing it, she would be in bed, often with her eyes closed. But she would wake up and say stuff like, 'He was young there!' or 'You know, he had a lot of wives' and she would start talking about him, It would bring her back to life...Then, I'd come home at night and get my angst out by listening to Sid Vicious doing 'My Way'! It made me realize that music really did have healing powers. It made me think...When I'm in the old folks home, are they going to play Bob Dylan and The Sex Pistols for me so I can come to life?”

Music has been a crucial part of Street's life and art from the very beginning. As a teenage Folk singer, he once talked his way into opening a show for the legendary Phil Ochs. When Punk hit New York City in the late '70s, Street was a willing and enthusiastic participant. After finding his niche in the scene as a performer in The New Wave Vaudeville Show (which also spawned actress/musician Ann Magnuson and the incomparable Klaus Nomi), he formed the theatre troupe Robot Factory and traveled west at the urging of his friend (and legendary LA Punk producer) Geza X. Street's time in Los Angeles was highlighted by Robot Factory opening for The Cramps at Brendan Mullen's club, The (Other) Masque, in February 1979. 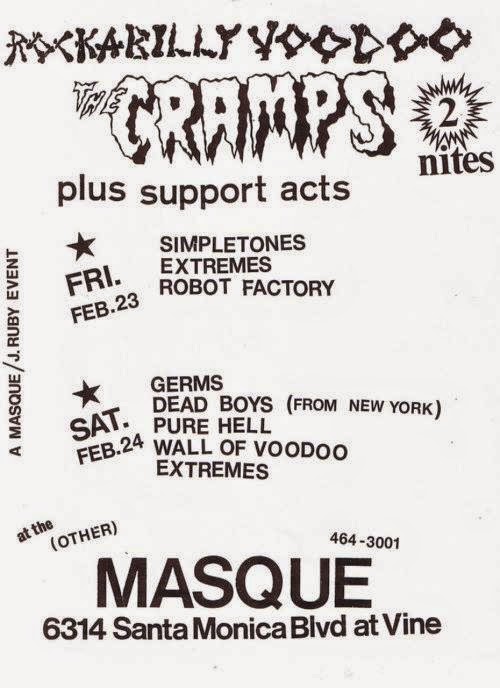 Once back in New York, Street got a job at Punk fashion mecca Natasha NYC, where he made friends with Glenn Danzig and Jerry Only of The Misfits, who would frequent the store to support the local scene and try to sell their silk screened Astro Boy and Boris and Natasha T-shirts. Danzig even came to see Street perform a “Punk Comedy” show at Hurrah, a NYC club, and had him open for The Misfits at one of their shows. Street also ended up writing the infamous “haunted house” liner notes for the band's 1979 Horror Business EP.

“I liked Glenn; I thought he was a really nice person,” he recalls. “I used to give him a hard time; I used to call him 'The Frank Sinatra of Punk. ' He was always very nice to me. All the Misfits were.”

Street's way with words would prove to be the catalyst for one of the most important episodes in Misfits history. Serving as the band's ad-hoc manager, he helped facilitate The Misfits scoring the coveted opening spot for The Damned's show at Hurrah in NYC in June '79. The band's success at the gig led to The Misfits landing an opening spot for The Damned's UK tour the following November. It was quite a trip: The band's involvement in the tour swiftly fell apart over money issues, drummer Joey Image split from the band and flew back to the US and Danzig and guitarist Bobby Steele got in a fight with some locals and temporarily ended up in jail (and wrote “London Dungeon” in the process). In hindsight, Street's gift of gab had (for better or for worse) dramatically changed the course of The Misfits' career.

Although he got along with all members of the then-current Misfits (a rare feat if ever there was one), Street built a particularly strong friendship with Bobby Steele. When the guitarist formed The Undead shortly after being jettisoned from the Danzig/Only camp in 1980, Street contributed the lyrics to the band's early number, “A Life Of Our Own” (featured on The Undead's 1981 Stiff Records EP, Nine Toes Later.) The ensuing decades saw Street contribute lyrics to The Undead on a frequent basis, with many of the band's most popular songs featuring his creative input. Not surprisingly, he is quick to praise his longtime friend and songwriting partner.

“I think Bobby has a sensibility that combines Punk with Pop,” he says. “His music is very listenable. He's a great guitar player, but as a songwriter, he makes listening to his music easy. Some music you have to endure, but Bobby’s work is enjoyable. He definitely deserved a bigger audience than he got.”

Considering his long history with the classic Misfits, it comes as little surprise that he is dismayed by the constant mudslinging (legal and otherwise) between past and present that has unfortunately become as much the band's trademark as their spikes and Devilocks.

“I like a lot of the new Misfits stuff, but it makes me sad that a lot of my friends don't get along with each other,” he says.


As wild and crazy as Street was in the old Punk days, he was always the apple of his mother’s eye.

“I think she was a true Jewish mother,” he says. “She didn't judge me; she was more concerned with making sure I had enough chicken soup to stay well. She never talked down my dreams, and she was always there to give whatever support she could.”

Lichtenstein's love for her son is clear throughout What the Health. One night at Studio 54 in the 'late 70s, Street had more than a few drinks before hitting the dance floor with an unnamed TV starlet. While an utter blast, the evening ended with him drunk and contending with a badly sprained ankle. So what does this wild, nonconformist, anti-establishment punk do to seek relief? Get a cab to Penn Station, take the train all the way to New Jersey and crash at his mom's house.

As he writes in the book, “When I woke up the next morning, my foot was swollen like the size of a elephant's. Mom iced it, kept it iced, fed me chicken soup for a week or so [her basic cure for just about everything] and then, when the swelling finally went down, sent me back into the city restored and armed with a least a week's supply of more chicken soup and a few frozen meals.”

In addition to fielding offers from traditional publishing companies, Street is currently working on turning What the Health into a musical. Above all, he hopes to build “a community around the book of people who have similar issues who care about health care.” This includes his fellow old school Punks, who could find themselves in a similar situation in the not-too-distant future.

“The whole original Punk generation is getting older,” he says. “Some of us are already ready to go, and some of us have parents, grandparents, aunts and uncles who are getting there. It's relevant to all of us, and we are going to have to deal with the issue of health care. Just like Punk changed the mindset of a country about what music is, I think this book can contribute to changing the mindset of a country about what heath care is – not looking at people in their eighties as expendable and a waste of money, but looking at the dignity of all life.”

Order What the Health, Mommie?: The Mommie Chronicles