It’s 2001. Seventeen-year-old guitarist Fallon Bowman is on the road in support of Spit, the hit debut album by her band, Kittie. The group’s on rotation on MTV, hitting stages at Ozzfest and beyond and enjoying the perks that come from being a popular act on tour. But just as things are picking up substantial steam for the group, Bowman is looking to bail.

“We were just diverging in terms of what I was interested in doing musically,” she reveals nearly two decades later. “I think I wanted to introduce more elements that I don’t think they were thinking about. We talked about it while we were writing what would become [Kittie’s second album] Oracle. I was heavily invested in the Industrial sound and listening to that kind of music, and that was not where everybody else was at. I was on an island all on my own, so I said, ‘This isn’t going to work. I don’t know how we can compromise on something like this.’ There were also pressures from the record label; we had to write the second record like yesterday, and there were all these artistic differences happening. Being young and inexperienced, there was nothing to help me navigate that impasse at the time. It all came to a head. It happens in bands all the time, but rarely does it happen to band on this rise at 17 years old.”

Although years of hindsight have ultimately helped Bowman find peace with her decision to leave Kittie, she spent the initial months following her departure “horribly depressed” and rarely stepping out of her house.

“I was quite scared. I was still a developing woman at the time, emotionally and physically. In terms of my comfort level, I knew I had to do it at the time, but it really pained me. I didn’t get over it and start being comfortable with it being the correct decision until I was around 20. I still firmly believe it was a good move for me at the time, but I was very insecure about it. I didn’t know anything else besides listening to music and doing music. It was like, ‘What else am I going to do with my life?’ It was a very, very difficult time for me.”

Eventually, Bowman found her way back. In addition to filling in on guitar for a tour with the Canadian band Tuuli (featuring future Eagles of Death Metal bassist Jennie Vee), she launched a new project called Amphibious Assault. Featuring contributions from Spit/Oracle-era Kittie bassist Talena Atfield, Amphibious Assault’s Industrial-driven sound can be heard on 2003’s District Six and 2007’s On Better Days And Sin-Eating.
Shortly before the release of District Six, a chat with longtime friend Jason Miller (Godhead) unexpectedly started a new and exciting chapter in Bowman’s musical story.

“It’s interesting that when I left Kittie, a lot of people just refused to talk to me. It was very strange; it was like, ‘Okay, so we weren’t really friends?’ Jason kept in touch with me, and I expressed interest in working with other people. He said, ‘Listen, I have a friend; you might have heard of him.’”

“Jason dropped the bomb; at first, I was like, ‘WHAT?! Really? COOL!’ Martin called me about a week later; he was like, ‘Come down to Chicago. We’ll do this!’”

Before long, she was in the studio recording lead vocals to Pigface’s cover of the Delts 5 classic “Mind Your Own Business.” The song later became the opener on Pigface’s 2003 album, Easy Listening…For Difficult Fuckheads.

“Martin’s such an easy-going guy. How could you not love that man?”

In November 2016, Bowman flew to Chicago from her then-home in Demark to join Atkins and 30-plus other Pigface members for special 25th anniversary shows at Reggies and the House of Blues.

“What an experience! Just being around people who are so immensely talented and accomplished was invigorating in and of itself. Being able to perform ‘Mind Your Own Business’ was amazing. Of course, I inserted myself into ‘Godlike’! (laughs) Being around [former KMFDM/longtime Pigface singer] En Esch and his loveliness was enough for me to die a happy woman. It was a tremendous privilege to share the stage with such incredibly talented and overall good people. There was so much love and respect between people. It made me really, really miss performing a lot.”


These days, the easiest way to catch Bowman on stage is through her work as an actress in various stage productions around Ontario. Fans can also catch her vlogs on travel and other subjects on her YouTube channel, FallonBowmanTv, and listen to her monthly Deftones Album Breakdown podcast with co-host Jon Beatty (Jon’s Untitled Podcast).

“Deftones are my favorite band of all time. I’m consistently wowed, and I respect the shit out of all of them. My comments [on the podcast] are usually about the feelings I associate with the music, and Jon is a little more technical with things in terms of discussing the production point of view.”

As for her own music, she insists that there is more to come.

“I’ve designated 2018 as the year to be as massively creative as possible. Whether it be writing or drawing or doing music, it’s about getting things done. I have tons of material, but I think I’m my own worst enemy when it comes to finishing these things. I also miss collaborating with someone else; I’m really tired of doing things on my own. I think I just need that extra push of creative mojo from another person or other people to push me forward.”


Until then, listeners are encouraged to check out Bowman’s brilliant 2011 solo album, Human, Conditional, on Bandcamp. An eclectic affair that falls somewhere between Amy Winehouse and Evanescence (and boasts an extraordinary rendition of Depeche Mode’s “In Your Room” – also covered in a much different form on District Six), Human, Conditional was initially planned as a release by Fallon and the Grace Dynasty, her then-band with The Birthday Massacre drummer Rhim. However, logistical issues prompted the album to be put out as a solo record.

“The problem was that a lot of the people in the Grace Dynasty with me were all in their own bands. I was like, ‘Okay, I have all these songs that I’ve written. I’m going to go and record it, but I won’t put it out under our name.’ I would love to play with them again. There was a fantastic chemistry between all of us.” 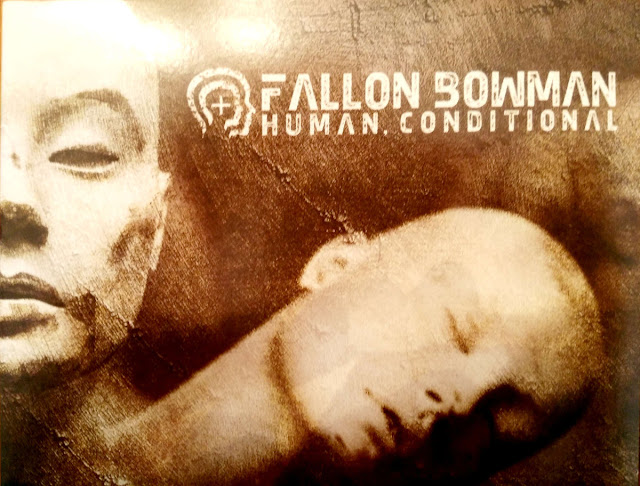 More recently, Bowman found herself re-connecting with her former Kittie bandmates for the premiere of Origins/Evolutions, the just-released documentary on the band’s 20th anniversary. Although she participated in the project’s crowdfunding efforts and was interviewed for the film, she was still very surprised by the finished product.

“I didn’t follow the band after my involvement with them. I wanted nothing to do with hearing about them or anything. Getting to see what they had to go through after Talena left the band was interesting to me. There were so many things that I had no idea had happened. It was very informative to me as a former member. We kept in contact, but we never really had in-depth conversations about the things they had to deal with and the ups and downs post-Oracle. It was very interesting to me on that level, and it was quite shocking at times. I was like, ‘Wow! That’s crazy!’ But I enjoyed it; I laughed my ass off at some parts, and there was the appropriate amount of emotion injected in there. It was very well done.”

In addition to being on hand to celebrate the film’s first official viewing, she joined the other original members of Kittie – singer/guitarist Morgan Lander, drummer Mercedes Lander and bassist Tanya Candler – on stage for a live set at an after-party at the London Music Hall in Ontario.

“It was super surreal. We hadn’t practiced together at all. (laugh) For the most part, it was okay. There were times when I had to wake myself again; I was like, ‘What the fuck am I doing right now? Yesterday, I was at work, and now I’m playing in front of thousands of people!’ It was a very emotional experience at times as well, and it was different for me because Talena wasn’t there. I played the majority of my time in the band with her. That made me a little sad, but overall it was just an incredible experience. I couldn’t believe that people remembered certain things, like, ‘Do you still burn a candle when you play?’ I was like, ‘What are you talking about?’ Then, I realized, ‘Oh, yeah. I used to do that, didn’t I?’ People have a longer memory than I do, I suppose!”

The event also gave the guitarist a chance the experience Kittie’s post-Oracle material live when a later incarnation of the band took to the stage.

“I was so fucking blown away listening to them play the songs that they play now as opposed to the ones we wrote as 13 year olds. While those songs were good, the stuff that they’re doing now is fucking spectacular. It got so much more complicated, but really in an admirable and mind-blowing way – and that’s coming from a former member and somebody who used to be in the band. The band we were in 2000 and 2001 is not the band they are now. They’re a well-oiled machine.”

With her former band celebrating their 20th year, Bowman looks back at her Kittie experience with respect for what they accomplished in the early days and admiration for her past bandmates’ ability to persevere to the point where they are now one of the last bands standing from the late-’90s Nu Metal boom.

“I think Kittie’s longevity has quite a bit to do with people already deciding that we were – and they would continue to be – a band that would fall off the [industry] conveyer belt at the end. I won’t speak for them, but as I know them, I think it would have been quite motivating for them to not want to be what everyone was thinking they would be – a one-hit wonder and a product of the times. That was a very strong feeling from the very beginning; we wanted to be in it for the long haul and continue to make music and grow.”