"He Absolutely Lived It:" The Enduring Authenticity of the Late Andy Gill

Andy Gill is a moving target even in death.
When the Gang of Four co-founder/guitarist/producer passed away on February 1, 2020 at 64, the devastating grief surrounding the news was soon deepened by the thought that Gill’s creative output had been silenced forever. Thankfully, the man’s music continues to live on in a series of posthumous releases that kicked off mere days after his demise and will continue through the better part of 2021.
On Valentine’s Day 2020, the surviving members of Gil’s final incarnation of Gang of Four – singer John “Gaoler” Sterry, bassist Thomas McNeice and drummer Tobias Humble – joined his widow, Catherine Mayer (co-founder of the Women’s Equality Party and the Primadonna Festival), in sharing the completely unexpected news that new Gang of Four sounds were on the way. Released 12 days later, the digital This Heaven Gives Me Migraine EP was comprised of reworked versions of three past Gang of Four numbers (2015’s “The Dying Rays,” 1979’s “Natural’s Not in It” and 2019’s “Toreador”) bookended by two audio clips of Gill speaking.
“This collection of songs was recorded just before Andy died, and it was his intention to get these out – to represent the way we played them on tour, late last year,” explained Sterry in the February 14, 2020 announcement. “All three songs were recorded in Andy’s home studio in London, and there’s a fly-on-the-wall intimacy to this EP – from the song selection to the snippets of spoken word.”
“From the hospital, Andy continued to give final notes on mixes of music that he looked forward to releasing,” added Mayer. “Since his death, I have been working with the band to fulfill his vision. The only change we have made is to include on the EP two brief recordings of Andy speaking, both, in different ways, essence of Andy.” 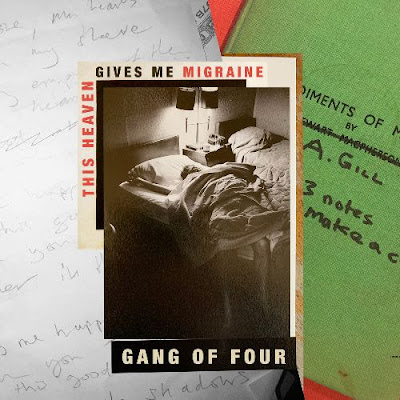 This Heaven Gives Me Migraine was promoted by the advance single “The Dying Rays (2020),” an updated version of a song originally included on 2015’s What Happens Next. On the original, guest singer Herbert Grönemeyer perfectly personified the quiet sorrow that hits many of us as we age and begin to contemplate our mortality. While Grönemeyer’s performance embodied the ravages of time and regret, Sterry’s interpretation reflected a young man who got to experience the world under the tutelage of a renowned mentor before seeing that magic come to an abrupt and sad end:
Control and power
Empires were built in our minds
But it will all go up in a blaze
Only dust
In the dying rays.
“[‘The Dying Rays’] is classic Gang of Four in a way,” Sterry observed during a call with this writer last July. “It’s talking about a grand concept like particles of dust in the universe but then sort of condensing it down and going into the personal. That’s what it meant to me – how these grand concepts can relate to someone as an individual.”
Perhaps the most powerful aspect of the EP’s version of “The Dying Rays” is that Sterry recorded his vocals for it only days after Gill’s departure.
“It was one of the most emotional recording sessions I’ve ever done. We had our long-suffering sound engineer controlling the desk, and we had to stop a couple of times. It was one of those things. But I’m glad I took it on, and I’m glad the reception to my vocals on that has been really, really positive, which is great.”
Sterry, McNeice and Humble later performed the song at Gill’s memorial in London.
July 2020 saw the arrival of a second EP, Anti Hero. Again culled from Gill’s final Gang of Four sessions, the collection featured “Forever Starts Now” (a track that, according to Sterry, “just missed the cut” for 2019’s Happy Now album) and re-recorded versions of 1979’s “Glass” and 2019’s “Change the Locks.” A fourth song, “Day Turns into Night,” marked Sterry’s debut under the solo moniker JJ Sterry and found the singer offering a deeply personal tribute to his fallen friend.
“I was doing a lot of writing for other people around the time of Andy’s death and the six months prior to that as well. I had this track sort of bubbling away; when Andy died, I finished it off. It’s unequivocally about Andy. I sent it to the Gang of Four management, because I send him most of what I’m doing just to keep him in the loop. He heard it, and he goes, ‘That’s about Andy.’ I was like, ‘Oh, shit. Is it that obvious?’ Catherine heard it as well, as she loved it. She was like, ‘This has got to go on the EP.’ I initially was a little bit skeptical of it, because it was quite different to the other tracks on there. It was really quite black-and-white. Normally, I try to have a little bit of ambiguity and things so it could mean different things to different people. But having put it out, I’m glad it was written as it was, because it was so pure in his intention. There’s no cynicism in there at all.”

In addition to its heart-rending lyrics and performance, “Day Turns into Night” was made memorable by McNeice’s pristine production.
“It actually started off as a bit of a drum-and-bass track. It had mad drums on it. All the other elements were there, but then we sent it to Thomas. He’s basically a genius; he stripped it back, took the drums off it, kind of made it half-time and mixed and mastered it. It just sounded great.”
All net receipts received by Gang of Four from sales and streams of Anti Hero are being donated to Guy’s and St Thomas’ NHS Foundation Trust in support of those who tried to save Gill’s life. The EP’s cover artwork is a variant of a full-scale portrait of Gill by Shepard Fairey, creator of the iconic Obama "Hope" image. 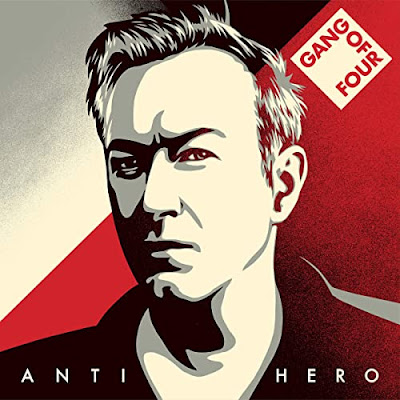 “Gang of Four has been a profound inspiration for me because the band demonstrates that great art can powerfully merge pleasure and intellectual provocation," Fairey commented before Anti Hero’s release. “I was devastated to hear of Andy Gill’s passing but honored to make a portrait of him in the hope of creating an iconic image of one of my heroes – with apologies to Andy; to me, he was a hero – to serve as a reminder that though life may be fleeting, Andy’s potent art and ideas will endure.”
Although it is not uncommon for classic acts to re-record older material, it’s a different matter entirely to see a band remake tracks from its most recent album. Why was Gang of Four so quick to reinvent “Toreador” and “Change the Locks” during the band’s final session when it had released the original version just a few months earlier on Happy Now?
“When you’re recording an album, you’re creating as you go,” Sterry shared during our call. “But when you’re playing those songs live over the course of a 30-date US tour, you really get to know them inside out. As a vocalist, I certainly interpret the songs differently and put my own personality to them as I grow with and learn them. ‘Toreador’ and ‘Change the Locks’ were in the set […] When we came off tour, we felt we were playing them differently and could interpret them in a different way. We wanted to get [those] down with the energy of a live performance. It kind of was; we recorded at Andy’s studio just straight off the bat as if we were at a live show. The thinking was not just to re-record it live; it was to re-record it with how we reinterpreted the songs at that point, which were certainly different to the originals in terms of feel.”
Anti Hero and This Heaven Gives Me Migraine were released together in physical form last August as a single full-length LP in limited-edition red and orange pressings. As with the Anti Hero digital EP, proceeds from the vinyl editions are going to Guy’s and St Thomas’ NHS Foundation Trust. 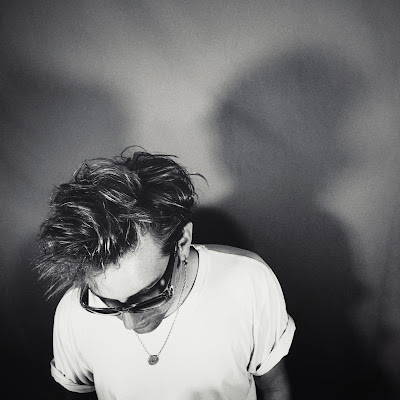 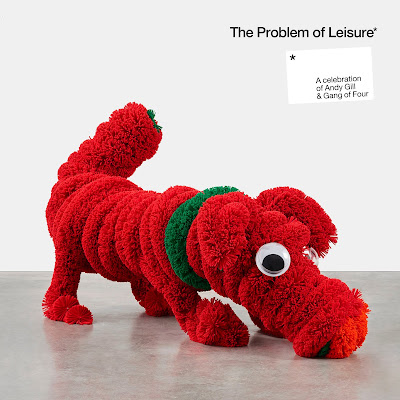 The album’s artwork was created by longtime Gang Of four aficionado Damien Hirst.
“Everybody who grew up with Gang of Four in their lives can remember how mind-blowing and forward-thinking and filled with creative energy it was at the time,” Hirst observes on Gang of Four’s official website. “Guess what? It still is now. It’s art. Art that’s reaching out of this world yet somehow still down to earth. It’s so great to be involved with this release and to see and hear a new generation of musicians paying tribute to Andy Gill’s incredible music. My artwork ‘Dog with Bone,’ which Andy picked for the cover from a few ideas I had, is from a new series of giant pipe cleaner animals based on little ones made in my studio by kids. I think he wanted this work for the cover because it’s new and unexpected and in your face and hard not to like. They make adults feel like children, and Andy always wanted to celebrate that.”

The trinity of upcoming Gill-related releases will conclude in July with the US/Canadian publication of Good Grief: Embracing Life at a Time of Death, a memoir written by Mayer and her mother, Anne. Originally published by Harper Collins in the UK, Ireland, Australia, New Zealand and South Africa last December, the book chronicles how the mother and daughter – widowed within 41 days of each other – dealt with these losses and cared for one another under the growing weight of the coronavirus pandemic. The book also explores the very strong possibility that Gill died as a result of contracting COVID-19 while on tour in China with Gang of Four in late 2019. (Mayer also tackles the topic in a May 2020 piece on her website.) 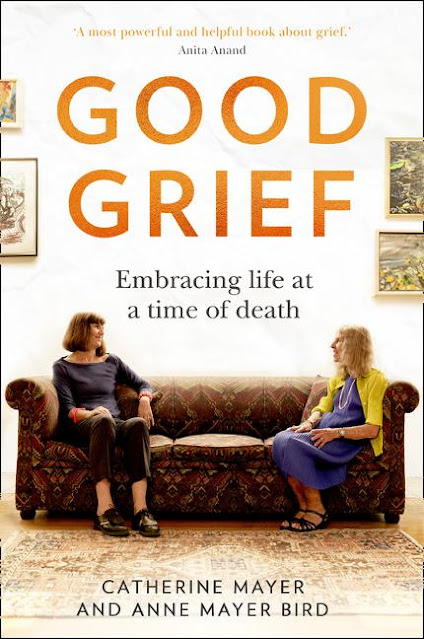 Although there is plenty of activity in the world of Gang of Four these days, it is impossible to consider any of these developments without a deep sense of loss. The sting of Gill’s profound absence has not lessened in the 12 months since his death. Not surprisingly, his passing prompted an avalanche of accolades from fans and music scribes (including yours truly) as they attempted to encapsulate the man’s contributions to composition and production. But how does Sterry – someone privileged to experience Gill’s creative mind up close – best describe what his late friend and bandmate brought to the world of music?
“I don’t know anyone [else] who’s ever got that [guitar] sound. It always felt like it was kind of on the brink of breaking down. I think that was the beauty of it; it didn’t sound like it was easy […] Behind all that, there was a lot of theory behind what he was doing – that push and pull between anarchy and rule.
“In some ways, Andy was totally Punk Rock,” he added. “It was like, ‘Right. It’s done. Get that out.’ But in a lot of ways, especially in his lyrics and with his production, he’d exhaust every possibility. He’d fine-tune things constantly. He was constantly analyzing, and he was constantly writing. He would never work to an album cycle; it wasn’t like, ‘We’ve got an album to do. Let’s start writing.’ He’d watch TV, and there would be some little phrase that would pique his interest, and he would write that down. Then, we’d go to the studio, and there would be reams of paper everywhere – completely illegible, but it was all there. He was creative all the time. That was something I was inspired by. He was authentic; he absolutely lived it.”
More on Andy Gill/Gang of Four on this website
Pre-Order The Problem of Leisure
Official Gang of Four Website
Gang of Four on Facebook
Gang of Four on Instagram
Gang of Four on Twitter
JJ Sterry on Facebook
Official Catherine Mayer Website