Because He Can: David Bergman Explores Bon Jovi's WORK Ethic 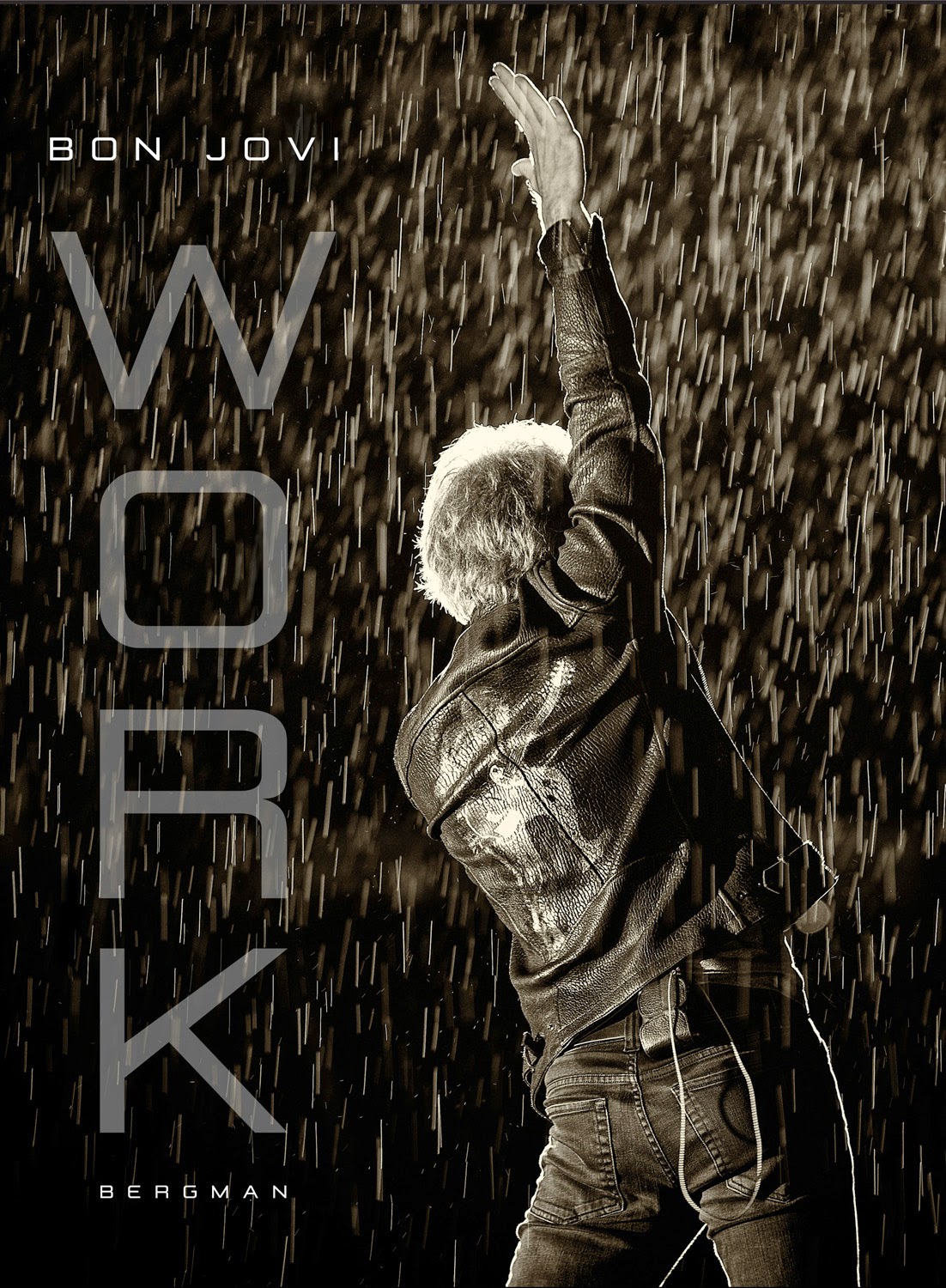 "David is not only one of the finest photographers we've ever worked with, but he's the kind of guy you can be comfortable hanging around with in any environment. At the end of the day, the work speaks for itself. His photos are a work of art.” — Jon Bon Jovi

What's it like to spend every day with the world's biggest touring act? As official Bon Jovi photographer David Bergman has learned, staying on top in a very difficult business comes down to hard WORK.

Featuring some of the most breathtaking images you'll ever see in a music-related book, Bon Jovi: WORK (available on Bon Jovi's official website) offers an inside look into the highs, lows and private moments that defined the band from 2010 to 2013. Weighing nearly five pounds, this oversized, 210-page hardcover art book features images culled from two record-breaking world tours. Unlike most Rock-related books, Bon Jovi: WORK is the result of one man's ability to get up close and very personal with his subject.

“This band has given me access that you would never think they would anymore,” Bergman says. “Bands just really don't do this, [but] Jon's one of those guys who really gets it...It wasn't that hard to get him to let me tag along and really go behind the scenes and document them in a way that they haven't really even been documented [in the past].”

Music has always been a major part of Bergman's life. A Berklee School of Music veteran, he eventually sold his drums to buy camera lenses and began his professional career in the early '90s at the Miami Herald. An assignment covering Gloria Estefan on the road made him realize his passion for immortalizing live music performances. After stints on tour with the likes of Barenaked Ladies, Avril Lavigne and Sarah McLachlan, he set his sights on getting the definitive tour photographer gig.

“I went after [Bon Jovi] pretty hard,” he recalls. “It took me a couple of years; it really is not easy to get into that inner circle. Eventually, I was able to get a meeting with the right person. They let me shoot a couple of gigs in the beginning, and I would just do a handful of shows. Over the course of early 2010 and into that summer and by the fall for sure, they put me on a tour bus and I became the official tour photographer. By the end of the year and into 2011, Jon got to know me and my work really well and wanted me really embedded with the band. I was doing so much of the behind-the-scenes stuff that it made logistical sense at that point to bring me into the inner inner circle. The next thing I know, I'm traveling on the private plane with the band every day instead of on the tour buses with the crew...It was just a slow and steady progression, and I always kind of had my eye on the prize and eventually got there.”

Over the course of four years, Bergman shot approximately 800,000 frames of the band on the road. Along the way, he launched www.TourPhotographer.com, a site that offered prints of Bon Jovi performances for fans to purchase. Fans could go online after the show they attended, look at images of the show they were at and buy prints of various sizes. The right shots were selected from a pool of around 4,000 a night, with Bergman editing down the number before passing them along to Jon Bon Jovi for review and approval. While some major Rock stars might hand off such a task to an underling, Bergman says that Jon was deeply involved in everything regarding his band.

“I thought when I came in that I would deal with a publicist or an assistant publicist and I wouldn't have any contact with the band,” Bergan says. “But I found out real quickly that Jon Bon Jovi was actually doing the approvals of my images every step along the way.”

Considering Jon's personal involvement in the WORK project, it's admirable that he approved the inclusion of visuals that don't always present him in the most flattering light. For example, one of the book's most striking series of photos is of the frontman writhing in pain backstage in Helsinki after experiencing a meniscus tear in his knee. The man's agony is palpable.

“Honestly, I went immediately into journalist mode,” says Bergman of capturing the event. “Even though I worked for the band, I still want to document everything. We can decide later what's going to be important and what's not, but I'm going to shoot everything. I have these conversations with Jon; I'm like, 'Look, it's always better to shoot it and then decide not to use it or not put it out publicly then to not shoot it, because then you have no options.'”

The incident in Helsinki points to perhaps the greatest secret behind Bon Jovi's enduring success: Not only did he stay onstage for another 70 minutes to finish the show after suffering the injury, Jon also refused to cancel a single show for two weeks. He only paused to have doctors operate on his leg once he had some time off. Bergman went on to photograph Jon's subsequent acupuncture treatment and surgery. (“I was wearing the scrubs and the whole thing!” he says.) When it came time to construct WORK, Jon didn't hold back on sharing the ordeal with fans.

As Bergman remembers, “As we started talking about this and putting it in the book, he said, 'Look, if this inspires one kid who sees this to work through the pain and push through an injury and come back on the other side better, stronger and faster, then it's worth it.'

“Jon is really one of the best frontmen in the business,” he adds. “Whether it's the person in the front row or the person at the very top of the back row of the stadium, they all feel like he's singing right to them. That's a unique skill that not many people have.”

Easily one of the most intense visuals in WORK is the shot Bergman took from the roof of the sold-out Soldier Field in Chicago, with the city's skyline in tow.

“One of the advantages of working for the biggest Rock band in the world is that I have literally all access,” he says. “I've worked with other bands, and when they go into an arena or a theatre, the local people still have a lot of power – which is the way it should be. You come in and say, 'Oh, I wish I could go here to make a picture,' and they say, 'I don't know; it's an insurance issue' or whatever. Well, when you work for Bon Jovi and you've got that All Access Pass and Bon Jovi management has given you the seal of approval to do whatever you need to do, I could do whatever I wanted to do.”

In addition to showcasing Bergman's skills, WORK offers a series of personal photos taken by Jon himself. These intimate shots range from family vacation pics to stunning glimpses of a safari trip in South Africa.

“He's really into it,” Bergman says of Jon's explorations in camera work. “He's really got a good eye.”

Above all, WORK celebrates the strengths of a band that is still achieving remarkable heights three decades after their debut. While many of their '80s hit-making contemporaries ultimately fell by the wayside, Bon Jovi's “Because We Can” world tour grossed $259.5 million last year. Clearly, this group – and the man who documents their triumphs – won't be slowing down any time soon.

“These guys still give 110 percent every single night,” Bergman says. “Jon not canceling shows just because he was badly injured says a lot about their character; that's why they're still going. A lot of other bands would have postponed the tour if there was an injury like that. The tour would have been canceled, and they would make [the dates] up in six months. Those guys won't do that...If those guys are physically able to perform, they're going to do it – and do it for two and a half, three hours. I've seen plenty of their shows that just gone on and on. I think the crowds respect and appreciate that. The band has not rested on its laurels. Certainly, when they kick into 'Livin' On A Prayer' and 'Wanted Dead Or Alive,' everybody goes crazy, but they're still putting out new music. The last album [2013's What About Now] debuted at Number One. How many bands 30 years on are still putting out Number One albums?”


More information on David Bergman is available at www.davidbergman.net and www.TourPhotographer.com. Samples of images from WORK can be viewed HERE.