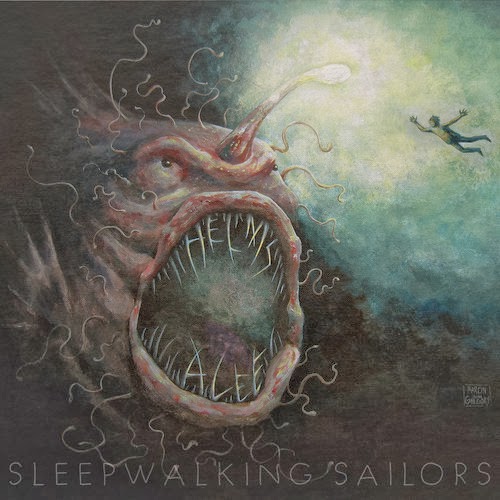 Although Helms Alee live and breathe in present-day Seattle, the band could have easily existed in the dirty corridors of the ’80s New York underground scene. Right from the first few seconds of feedback on opening cut “Pleasure Center,” Sleepwalking Sailors (Helms Alee’s third album and first for bulletproof indie Sargent House) hits the listener like a long-lost companion of Foetus, Of Cabbages And Kings, A Screw-era Swans, The Thing or any of the other groups that offered sludge and rage on the CBGB stage 25 or so years ago. Now, take that aural landscape and add in some Jesus Lizard, Fire Dances-era Killing Joke and Dimension Hatröss-era Voivod, and you have only scratched the surface of the many intriguing twists and turns that Sleepwalking Sailors takes in just 39 minutes.

Bassist/vocalist Dana James, drummer/vocalist Hozoji Matheson-Margullis and guitarist/vocalist Ben Verellen fill every second of Sleepwalking Sailors with artistic ambition. The songs don’t have “hooks” to get the listener interested, or earworm choruses to ensure radio play. Nothing on Sleepwalking Sailors is a particularly smooth ride, but the high level of fresh ideas presented makes the album a truly rewarding experience. From Verellen’s  gargantuan wails to Matheson-Margullis’ exquisite drumming (especially on “Tumescence,” the 2:45 mark on “Pinniped” and the 1:42 point on “New West”), every sound created for these songs has purpose and meaning. This isn’t a band simply screaming their lungs out and making atonal noise; this is a group of musicians employing these techniques to take their music somewhere else. You can hear the thought, care and precision put into every composition on this album. And while it is helpful to reference other artists when describing Sleepwalking Sailors to uninitiated ears, it only takes one listen to this album to know that Helms Alee is creating music for a new era. Nothing else around these days sounds quite like this.