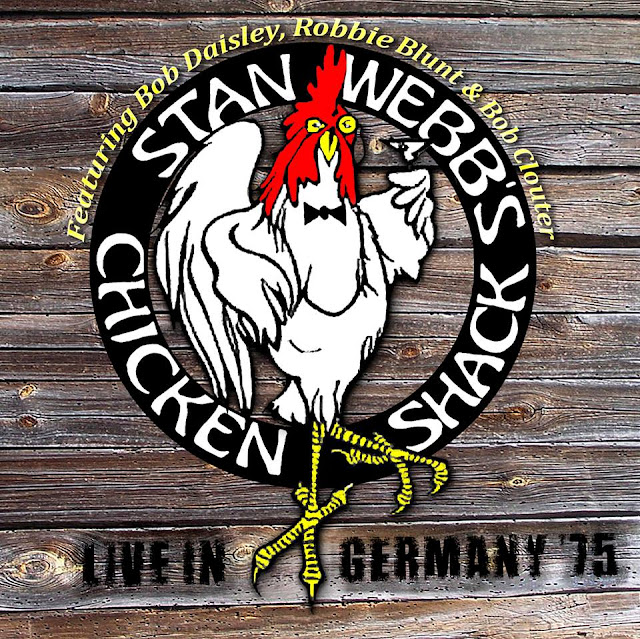 Although he is best known for his lengthy career in Heavy Metal (including playing bass on – and penning the lyrics and co-writing the music for – some of Ozzy Osbourne's most recognizable songs), bassist Bob Daisley is a bona fide Blues lover. Forty years ago, Daisley indulged his love for this music as a member of Chicken Shack, one of the most beloved Blues acts in the world. Earlier this year, he released Live In Germany '75, a CD recording of a Chicken Shack lineup completed by founding member Stan Webb on vocals/guitar, guitarist Robbie Blunt and drummer Bob Clouter. And man is it killer.

With only nine songs in 78 minutes, it's clear that jamming is at the heart of this recording. From a driving nine-minute take on Willie Dixon's “Homework” to the rock-solid shuffle of their nearly eight-minute cover of Sonny Thompson's “I'm Tore Down,” Chicken Shack bring these Blues staples into new and exciting worlds. With Live In Germany '75, you get a sonic snapshot of four musicians truly enjoying themselves on stage.

Naturally, Stan Webb's fiery playing gets better and better with each listen. A true master of the guitar, Webb is in his perfect habitat on Live In Germany '75, using the stage to explore his instrument in ways simply not possible in a studio setting. And when this combines with Blunt's formidable skills, the results (such as in the band's interpretation of Don Nix's “Going Down” and Robert Johnson's “Dust My Broom”) are otherworldly.

Not surprisingly, the band's ability to handle real Blues rubs off on their own material, especially on the Webb/Blunt number “Rain On My Window Pane” and the Webb/Daisley/Blunt-written “Crying Again.” The epitome of authenticity, Chicken Shack's originals effortlessly hold their own against the Blues standards explored throughout the set. The band on this CD is absolutely the real thing.

While every moment of Live In Germany '75 offers high-caliber sounds, the 20-minute “Poor Boy” is the release's undisputed masterpiece. Originally a five minute tune on Chicken Shack's 1972 album Imagination Lady, the Webb composition reaches transcendental heights on the German stage, encompassing Blues, Heavy Rock, Funk and some truly awe-inspiring dynamics. (Check out the quiet jam that breaks out around the 5:40 mark.)

With a lineup comprised of players who would later end up working with the likes of Rainbow (Daisley) and Robert Plant (Blunt), it comes as little surprise that there is a heaviness to Live In Germany '75 that easily puts the band in the same Hard Rock league as their mid '70s touring mates in Deep Purple. If you're a Metal fan interested in exploring the genre's Bluesy roots, this is an album not to miss.

Limited to only 1,000 copies, Live In Germany '75 is a perfect introduction to the onstage magic of Chicken Shack and an intriguing glimpse into one of the many fascinating eras to define Bob Daisley's long-running career. Get it while you still can.