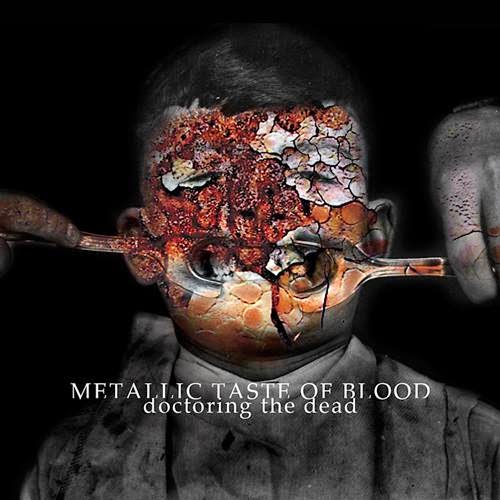 Founded in 2008, the London-based label RareNoiseRecords has been responsible for some of the most eclectic and downright challenging music released in recent times. The avant-garde avalanche continues with Doctoring The Dead, the new album by RareNoise co-founder Eraldo Bernocchi's project, Metallic Taste Of Blood.

Although there are enough words in the previous sentence to make the reader believe Doctoring The Dead is some kind of Death Metal release (an assumption made stronger by song titles like “The Death Of Pan,” “Murder Burger” and “Day Of Bones”), the album is actually a highly adventurous instrumental collection showcasing everything from Dub to distorted noise.

Along with longtime collaborator Colin Edwin (Porcupine Tree) on bass, Bernocchi is joined on this second Metallic Taste Of Blood release by veteran drummer Ted Parsons, whose extensive history includes stints with Swans, Prong, Foetus, Of Cabbages And Kings, Godflesh and Killing Joke. Naturally, Parsons' trademark bulletproof groove (presented here in its most impressive form since Godflesh's Hymns) is everywhere on Doctoring The Dead, locking in with Edwin's Jah Wobble-esque tones to create a pulse that never lets up. This creates a fantastic foundation for Bernocchi to manipulate his guitar in ways that resemble everything from Industrialized scrap metal to something off of Pure Moods – and typically within a single song.

Highlights: The fascinating “Pashupati” alternates between serene sounds and '80s Alphabet City noise, while the spirit of post-Filth/pre-Burning World Swans is alive in Parsons' work on “Synthetic Tongue” and the searing “The Death Of Pan.” Shades of The Orb can be felt on the mellow “Blind Voyeur,” while the chill first act of “Day Of Bones” suggests the calmer cousin of Prong's “Prime Cut” before the distortion kicks in around the 3:30 mark. Experimental in nature (but never abrasive enough to drive your dogs from the room), Doctoring The Dead is made an even greater success thanks to guests Roy Powell and Matilde Bernocchi, who both add “electronics” to a variety of tracks.

Recorded at Prague's Faust Studios (Killing Joke's Hosannas From The Basements Of Hell), Doctoring The Dead follows in the grand tradition of the mighty Tackhead, Tin Machine and other audio documents of unforgettable occasions when musicians of the highest possible caliber joined forces and got to work. Easily one of the best releases of 2015.