There is absolutely nothing about iwrestledabearonce (IWABO) that is conventional.

First, there's the name. Rolls right off the tongue, doesn't it? Second, there are three Mikes in the band - drummer Mikey Montgomery, guitarist Mike Stringer and bassist Mike Martin. (Actually, they call Mike Martin “Ricky” or “Rickshaw," 'cuz why not?) Stringer and singer Courtney LaPlante live in Victoria, BC; guitarist Steven Bradley lives in Los Angeles; “Ricky” lives in Texas; and “Mikey” (not to be confused with Mike a.k.a. “Ricky,” or Stringer a.k.a. “Michael”) lives in Oklahoma. Now... if your head isn't already spinning, it will after you listen to the band's explosive fourth album, Hail Mary. Released today on Artery Recordings, Hail Mary is a glorious musical mindfuck, mixing experimental noise in the grand tradition of The Boredoms and John Zorn's Naked City with a heavy dose of Prog-inspired Metal. I could go on with the descriptions, or I could just show you this:

Although IWABO have already built a reputation for brutally confrontational music, Hail Mary represents the band at its darkest and most abrasive. The inspiration for the album’s direction hit the band while on tour, when they realized over time that their set lists consistently featured their most aggressive material from past albums. This led to the decision to write what LaPlante calls a “heavy-as-shit record” from the ground up. This mission was helped along by the addition of LaPlante's significant other, Stringer, to the band.

“Michael was on tour with us pretty much the whole time that I've been in the band, just coming out to visit me,” offer LaPlante, who made her debut with IWABO on the previous album, 2013's Late For Nothing. “It would have just happened anyway very organically because we all love spending time with him. The best part is that he's also an incredible musician. We're so excited to have him writing music with us. He's very, very technical, but that's not the purpose of the songs he writes. The point [with Michael] is to have a well-formed, thoughtful piece of music. He's very methodical in the way that he writes the songs, but he's also an extremely great guitar player. I think that really makes Steven step it up, too. I watched them kind of challenge each other to play differently while recording this [album].”

“When I first started writing for this record, it was kind of up in the air because I felt like our styles were a little bit different,” observes Stringer. “I ultimately wanted to just make something that was still IWABO. This has always been one of those bands that kind of did whatever they wanted; they didn't really follow a path. When I started writing and showing Steven what I had, I was a little bit worried at first because it's a little bit different, but he was just like, 'Cool!' He would show me what he was doing, and it was kind of a mutual 'This is awesome! Let's keep going in this direction and see what's up.' It was a little overwhelming at first, but at the end of the day, I think we both met in the middle and it worked out.”

While Hail Mary succeeds in hitting the listener over the head with its sheer intensity, the album's greatest strength is its ability to bounce to the completely opposite extreme with ease. This is best showcased in how the Evanescence-esque ballad “Doomed To Fail Pt2" is immediately followed by the grotesque Death Metal onslaught of “Killed To Death.”

“I put that song transition on for my mom, just to frighten her,” jokes LaPlante. “She was bummed out. It was awesome!”

Hail Mary represents the latest chapter in LaPlante's whirlwind experience with iwrestledabearonce, which began when she discovered the group nearly a decade ago and became an instant fan.

“I specifically remember first hearing my band before I was in it,” she says. “My brother showed me the band on Myspace. Before he pressed play, he was like. “Okay...get ready..for this.” I heard it and I just couldn't believe that was a girl [singing]. I was in a band with my brother at the time, and we were kind of becoming a little heavier, and people would look at me in disgust when I'd do these type of vocals at shows. This was at Metal shows where all the men [on stage] would be doing those types of vocals, but when I would do it, it would be, like, so unattractive. Also, I was bad because I was just starting; I probably sounded like garbage. But no matter how I sounded, the fact I was doing it just bummed people out. When I first heard this band in 2007 and heard a girl doing that and being praised for it, I was like, 'You know what? I'm going to fully keep practicing this and fully do this in songs and not have this just be a small thing I put in.' By 2009, I felt more comfortable with it.”

Fast-forward to 2012, and LaPlante gets an offer out of the blue to join the band after former singer Krysta Cameron abruptly quit during their run on that summer's Warped Tour. Before she knew it, LaPlante was fronting IWABO for more than a month's worth of dates.

“I didn't know the guys at all,” she recalls. “I was at work, and I got a call from the band's [management], and they asked me to come on the tour. They just said, 'The singer just quit the band, and they just went on stage and played without her. She's not coming back. Can you come out here tomorrow and join the band? I said 'Alright.' (laughs) I met them on their day off on the 4th of July; the next day, we played a show. I had never practiced with them, and they had never practiced with me. I just went out there and played the show.”

Her first date with the band was in St. Louis – an experience remembered for more than just the music.

“It was so hot that day!” LaPlante says. “I came from Canada. I live in a very mild place; it doesn't snow and it's not hot. It was so hot... I put my phone on Steven's amp while I was playing the show. We played for like 25 minutes; when I got back, the plastic and rubber on my phone case had melted to his amp!”

All in all, a pretty insane series of events for a singer who got the attention of the band that had actually inspired her to do what she does in the first place.

“I'd walk around Warped Tour, and random people would be like, 'Mark Wahlberg!'” she jokes, making a reference to the classic 2001 film Rock Star. “It's not every day that one of your favorite bands comes to you and is like, 'If you don't join the band, we're done.' That's a weird thing to think about, because it's like, 'If I don't join this band, then my favorite band won't make music anymore.'”

The band first became aware of the singer's talents through Unicron, the group she had with her brother, Jackson. Looking back, it's obvious that the Unicron's efforts to build a strong online presence paid off.

“If I was dude, [iwrestledabearonce] probably would never have heard of me,” she observes. “Because I'm a girl and there aren't a lot of girls who do this kind of music, their friends over the last five years or so had probably [said to them], 'Check this out. This is weird,' or 'Check this out. These people are totally stealing your style! (laughs)' They were aware of me, and they always joked with each other, 'If the singer quits, we can call this chick!' (laughs)”

In addition to celebrating the release of Hail Mary, iwrestleabearonce is gearing up to hit the road this July/August for the All Stars Tour, a jaunt that also features Upon A Burning Body, Within The Ruins and others. (Dates are available here.) Although touring can be a stressful and demanding time for any musician – let alone two who are in a relationship – LaPlante and Stringer rise above these challenges as a team.

“We both have the exact same mentality when it comes to music and what we want to accomplish; we're both very driven in that way,” offers the guitarist. “When we're on tour, we treat it like we're in the band and this is what we're here to do; when we're at home, it's different. It's a one-in-a-million shot that it would work, but it works.”

With the band's ever-challenging music hitting larger audiences all the time, LaPlante looks forward to seeing how new and old fans alike will react to Hail Mary, one of the finest – and most uncompromising – albums of the year.


“I just want it to perk everyone's ears up,” she says. “I want it to be the kind of thing that if your friend puts this on in the car and you guys are having a conversation, you'd be like, 'Shut up! What are you playing right now?' That's my goal.” 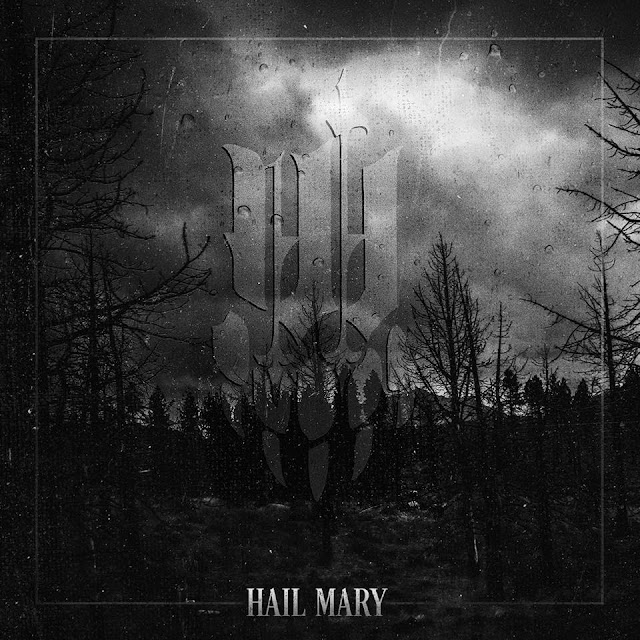