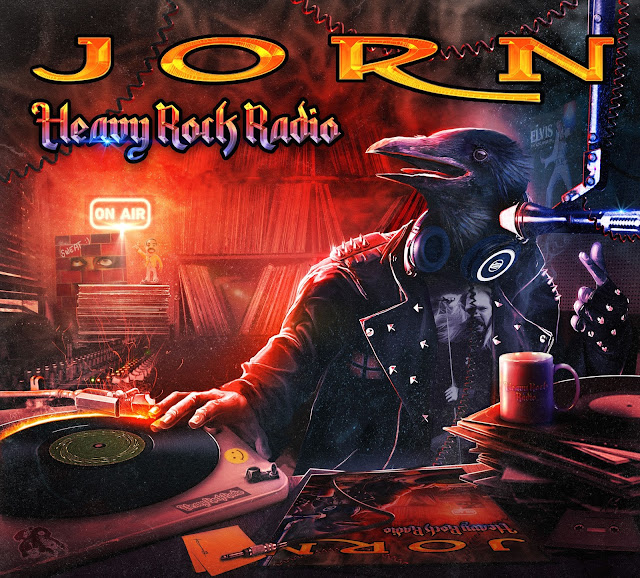 Perhaps best known for his time with Power Metal legends MasterPlan, Norwegian singer Jorn Lande boasts one of the most recognizable voices in the genre. Charging at the listener like a cross between Ronnie James Dio and Bruce Dickinson, Lande’s trademark pipes can be heard on more than 40 albums in different Rock and Metal styles.

His latest solo release under the “Jorn” moniker, Heavy Rock Radio, is a wildly eclectic collection that demonstrates Lande’s ability to turn anything into a modern-day Metal classic. While he takes on plenty of artists you’d expect (Sabbath, Purple, Dio), the singer truly amazes when he puts his signature sound on The Eagles’ “Hotel California,” Frida’s “I Know There’s Something Going On,” John Farnham’s “You’re The Voice” and (get this!) Kate Bush’s “Running Up That Hill.”

“I wrote three or four more songs by [Kate Bush] down on [the potential song] list,” Lande reveals. “But some of the other songs were a bit more artistic in a way. All of her songs are, but ‘Running Up That Hill’ was a commercial success. That song was what originally got me and my guitar player then to write the song called ‘Blacksong,’ which I did on a record called The Duke back in 2006. The original idea was actually to record [‘Running Up That Hill’], but then when we started looking for the right arrangement, we ended up writing a new song instead.”

“It’s such a cool song to crank up and drive to. I’m mostly into American cars. I love old Mustangs and Cudas and everything about American cars, so that song had been with me a long time.”

Other ‘70s-era tunes to get the Lande treatment on Heavy Rock Radio include Deep Purple’s “Stormbringer” and Queen’s “Killer Queen.” Lande selected these numbers to reflect his admiration for a time when performers were performers.

“It was a golden era for quality music that came from the heart and was really performed with feeling. If you didn't have the ‘Elvis Presley’ factor, you wouldn’t succeed back then; you wouldn’t get a record deal. That resulted in so many great performances and great bands. I think people were more honest towards themselves back then when they wrote music. They weren’t as focused on the market and not as calculating.

“It’s not right to say that everything that happened back in the ‘70s was the only way to do it,” he adds. “That’s wrong too, but at the same time it’s very hard when you grew up with that quality to actually put new bands and artists on the same level as some of these people you really look up to. They just give you something personal in a way and do something really natural, and it just hits you like an arrow.”


While Heavy Rock Radio pays homage to great artists of the past, Lande leaves room to reimagine more current tracks such as Paul Stanley’s “Live To Win” and Iron Maiden’s “The Final Frontier.” Although some fans might consider the latter to be an odd choice for the album, the singer insists that including the tune makes all the sense in the world.

“It’s just a song that I thought would fit the album because the verses have that kind of West Coast Rock-kind of expression, especially the guitars on the verse,” he explains. “It’s not a typical Iron Maiden song, really.”

The inclusion of Sabbath’s “Die Young” and Dio’s “Rainbow In The Dark” on Heavy Rock Radio comes as little surprise to those who have followed Lande’s work over the years. Not only did he cover Rainbow’s “Kill The King” on his 2007 covers album Unlocking the Past, but he released an album of Ronnie James Dio covers (unsurprisingly called Dio) in 2010. That same year, he (along with Glenn Hughes) had the honor of fronting Heaven & Hell (a.k.a. the Dio-fronted Black Sabbath) at the High Voltage Festival in July 2010 - their only (and final) live performance under that moniker following Dio’s passing. Looking back at the experience, Lande has nothing but profound respect for the originators of Metal.

“These guys are obviously one-of-a-kind musicians. Tony doesn’t only take care of the playing; he really takes care of his sound. He spends a lot of time developing his guitar sound. Maybe the diehard fans do, but I don’t think most other people who like Rock and Metal in general are aware of how great the sound he has is, and how powerful it comes out when he actually plays it. The combination of his talent and that sound that he has developed… I never heard anything like it before. I never stood in a rehearsal room with anything near that kind of sound and power; that was really massive. The same goes for Geezer; the bass playing is so good. It’s like an extension of the heart when they play. They just know exactly how to do it…These guys really have something special, and it’s really inspiring. Also, there’s no compromise musically [with them]. I think most other people today are compromising a lot with everything they do – what the record company wants, what’s a smart move for the market, what’s modern in the Metal and Rock scene. I think some of these old school guys do it in a more nature way.”

Wrapping up Heavy Rock Radio is yet another appearance of Lande’s Crow Man, this time in the guise of a radio DJ. Like Riot’s Johnny the Seal, the Crow Man has become as crucial to a Jorn release as the stellar singing.

“I started using the crow because it’s a fascinating and very smart bird. It’s also a symbol for the music. Rock ‘n’ Roll is not really sophisticated or royal in any way. I think the bird is a symbol for Rock ‘n’ Roll and a symbol for the working class hero, which is where I come from. It’s also very cunning and clever. I like all the aspects of the bird…Crows are everywhere, and they’re very independent. I also consider the crow to be a bit like the rebel or the outsider. I just started using the crow, and little by little it developed into being a mascot.”

With a new album of original material scheduled for early 2017 and dozens of powerful releases already behind him, Jorn Lande remains one of contemporary Metal’s strongest figures. If you’ve new to what the man has to offer, Heavy Rock Radio is a great place to start.