Under the Influence: Roger Earl on Hendrix, Simmonds & 45 Years of Foghat 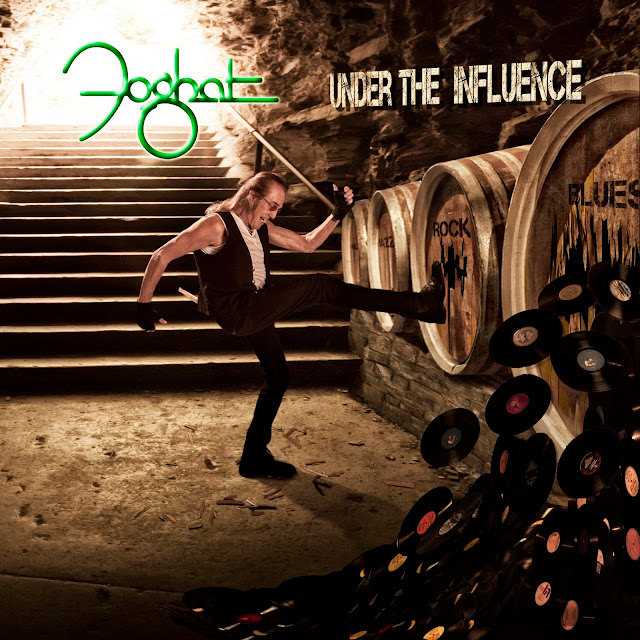 “Slow Ride.” “I Just Want To Make Love To You.” “Fool For The City.” These are three of the many classic songs that come to mind when the name “Foghat” is mentioned. Formed in 1971 by three former members of British Blues Rock legends Savory Brown, Foghat were one of the 1970s’ greatest live and recording acts. Still touring and recording to this day, the band is currently comprised of lead singer/lead guitarst Charlie Huhn (whose career has included stints with Ted Nugent, Gary Moore, Humble Pie and Victory), bassist Craig MacGregor, lead/slide guitarist Bryan Bassett and drummer Roger Earl. While some bands from their era rely solely on past glories to gain attention, Foghat spent the last three years crafting a new studio album, Under The Influence.

Released in June on the band’s own Foghat Records, Under The Influence finds the band joined by a host of special guests including former Foghat bassist Nick Jameson, Savoy Brown’s Kim Simmonds, longtime Buddy Guy collaborator Scott Holt, singer Dana Fuchs and current Foghat touring bassist Rodney O’ Quinn. (MacGregor is on a break from the band while he fights a high-profile battle against cancer.) Last month, Under The Influence hit #17 on Billboard’s Hard Rock Albums chart – the group’s first Billboard appearance in 33 years. Highlights of the album include the AC/DC-esque rocker “Knock It Off,” the humorous “Upside Of Lonely” and a new version of “Slow Ride” recorded to celebrate the track’s 40th anniversary.

Despite experiencing considerable ups and downs over the years (including the deaths of original singer/guitarist “Lonesome Dave” Peverett and original guitarist Rod Price), Foghat soldier on into their 45th year with sole founding member Earl still leading the charge. New England-area fans can see and hear the band’s still-relevant magic for themselves this Sunday, when Foghat hit the stage for a free show at the Wolf Den at Mohegan Sun Casino in Uncasville, CT.

An affable, good-humored fellow, Earl was great company when I recently phoned him for a chat regarding Foghat, reuniting with Kim Simmonds on record and his pre-Savoy Brown jam with the incomparable Jimi Hendrix. Enjoy!

The new record has been a long time coming for you guys. How does it feel to reach that finish line and actually hold this thing in your hands?

It’s great! You’re always proud of what you do and what you produce, but we all felt particularly good about this – the way it sounded and the way the songs sort of stood on their own. Not that we hadn’t done it before, but there was something special about this. I think a lot has to be said about our producer, Tom Hambridge. He really pulled it all together for us. It was really a lot of fun making this record. It wasn’t like hard work; everything was very positive. It was like Tom had joined the band. He helped with arranging and the ideas, and he also wrote and co-wrote some songs for us. It was very enjoyable.

Kim Simmonds appears on the new album. You two guys certainly go back a long way –

Have you remained in touch all this time?

Yes. Kim and I were always good friends; we stayed in touch over the years. In fact, last year we did a Rock Legends Cruise, and Kim was on there. I invited Kim to come up and play with Foghat; he played on ‘I Just Want To Make Love To You’ and a couple of other tunes with us. I went down and played with him at one of his shows, and I invited him to come and play on the new album. It was really cool playing with him. He lives in Upstate New York, and we finished the album down at Dark Horse Studios in Nashville. Kim left his house at about four o’clock in the morning, then got stuck in Detroit for about eight hours and didn’t get to Nashville until about 8:30, quarter to 9. I picked him up at the airport and said, ‘Do you want to get something to eat or take a nap or something?’ He said, ‘No, let’s go to the studio and play.’ We go to the studio, we got the amp that he wanted and turned everything up to 11. The first song I think he did was ‘Upside Of Lonely.’ I said, ‘You want us to play it for you?’ He said, ‘No.’ He played this song flawlessly and with great emotion the first time. He got a standing ovation; there were about 10 people in the studio at the time. He did it again, and he was smiling all the time. He plays beautifully; he probably plays better [now] than he ever did, I think.

Charlie Huhn’s been with you now about 10 years –

About 16 years, actually. He has some big shoes to fill, but he’s a great singer and a great guitar player. I don’t think Ted really realized how good he really was…Then of course, he took over in Humble Pie from Stevie Marriott. Those are other big shoes to fill. We did a show [with them] when Dave was still alive somewhere in the Midwest. They went on first, [and] the band sounded off. I didn’t think they were very good; the music didn’t sound right. Then Charlie started singing, and we both looked at each other and went, ‘Whoa!’ I remembered that after Dave had passed and we were looking for a new singer. At first, I wasn’t really sure how I was going to do it or what I was going to do, but Charlie was the only choice at the time. We had a lot of people send in tapes and CDs, but Charlie was the only one who had the pipes to cover it all. He’s a great guitar player as well.

You’re the only person I’ll ever talk to in my career who has an answer to this question: What was your experience playing with Jimi Hendrix?

I was a commercial artist in London at the time…Chas Chandler, the bass player from The Animals and Jimi’s manager, called me up at work and [asked] if I’d be interested in auditioning for Jimi Hendrix. In England, many people had heard about him. People who had been to the states – like Jeff Beck, Eric Clapton and Pete Townshend – were all raving about this guy, Jimi Hendrix. So I said to Chas, ‘Yeah, I’d love to!’ I went to a club just off of Piccadilly Circus; I think it was called Birdland. Of course, it was raining as usual… I brought my drums in; my older brother gave me a hand taking the drums down. I’m sitting outside in the rain, and Jimi jumped up and started talking to me about some songs he’d written the night before. He was a really friendly guy.

It came to my turn to play with him, and he was very generous with his time. But he started playing and I didn’t have a clue as to what he has doing! It was music that I’d never heard. It seemed a while, but it was probably only 10 minutes. Then, he started playing like slow Blues, and then he played a Chuck Berry tune, then played ‘Like A Rolling Stone’ and did some more stuff. It was really cool. I actually got a chance to jam with him a couple of times in the States after I joined Savoy Brown. I jammed with him in a club in New York and also at a club in LA, I think. He was a really, really cool guy and a fantastic musician. He re-wrote the whole book on guitar playing… Jimi was really exciting once I got a handle on what he was doing. He had some great drummers auditioning. I think the drummer he ended up with, Mitch Mitchell, was just absolutely incredible for him. It was a new approach to music that Mitch Mitchell had with Jimi.

I also understand your auditioned for Arthur Brown as well during that period.

Where are you hearing all this from? I did! I didn’t get that job either. (laughs)

Going back to Foghat, you guys are known for many songs in your repertoire, but surely “Slow Ride” is the best-known one. There are bands all over this planet praying for one song that stands the test of time. What do you think it was about that particular number that continues to be THE song for Foghat?

It’s kind of what Foghat is all about. It’s a Rock ‘n’ Roll band steeped in the Blues. We still play a slow Blues or whatever, but that’s from a different era. Actually, the riff to ‘Slow Ride’ was basically like a John Lee Hooker riff, but instead of playing it like a shuffle, we played it like a 4/4. It came from a jam. Rod Price and I had a house out here on Long Island at the time, and we’d jam in the basement. Nick Jameson had just joined us on bass – this is 1974, I think – and we just started jamming. The whole arrangement was done that night. We recorded it on cassettes back then. Dave said, ‘I think I’ve got some words for that.’ And that was how it started. In fact, a lot of Foghat’s music comes jamming. The way we play [Willie Dixon's] ‘I Just Want To Make Love To You’ on Foghat’s first album was something we would play at soundchecks when we were in Savory Brown. We would just sort of play that kind of groove and then upstroke on the guitar – which was like a Blues thing, but of course we fucked around with it a little bit. I think Dave said it once: ‘Foghat’s a Blues band. We just turn it up to 11!’ (laughs)


Foghat has been through a lot throughout their history, but obviously the band is still here in 2016. For you, what has been the key to keeping this band going for 45 years?

I love my work! (laughs) Be careful what you wish for. All I ever wanted to do since I took up drums at 12 or 13 was to play in a Rock ‘n’ Roll band. I’ve been real fortunate, and I enjoy it even today. I usually spend an hour or more on the practice pads, and I have a drum room outside the house. I love doing it. I’ve been really fortunate to play with great musicians over the years. Dave was a gas to play with; he would always be giving it 100 percent. Rod was a brilliant guitar player. Bryan Bassett is an incredible slide lead guitar player. He’s also a brilliant engineer who’s produced, mixed and mastered our last two or three albums and our live releases. Charlie Huhn is a great singer and guitar player, and Craig MacGregor is a great bass player, as is our current bass player, Rodney O’Quinn. If you play with really good musicians, I think it helps raise your game and keeps you interested in what you’re doing.

*Portions of this interview were edited for length and clarity.