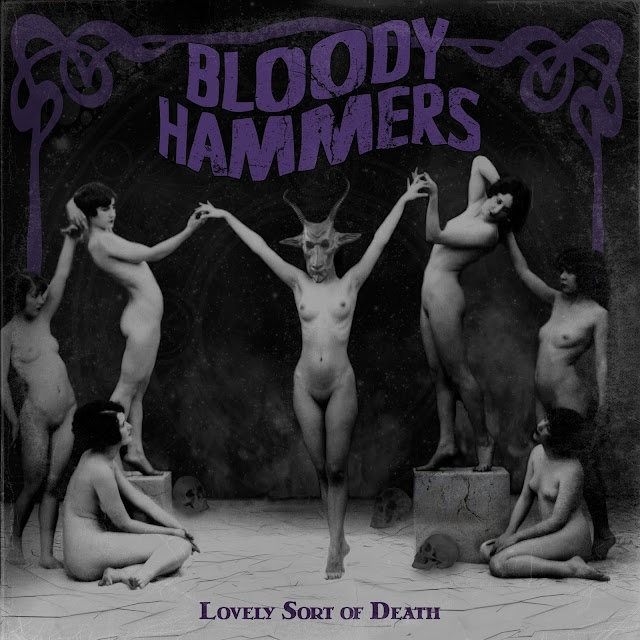 A prominent figure in the underground Goth/Darkwave scene since the ’90s, Anders Manga has returned to his Rock and Metal roots with Lovely Sort of Death, the fourth release by his Bloody Hammers project. Out today on Napalm Records, Lovely Sort of Death finds Manga and his wife, Devallia, delivering an Occult Rock masterpiece that echoes the heaviest moments of Type O Negative and (at times) Vision Thing-era Sisters of Mercy.

Based in (where else?) Transylvania County, North Carolina, Manga recently gave me a few minutes of his time to discuss the new album, his evolution as an active recording artist and even his love of cult music legend Roky Erickson. While his dark image might suggest an antisocial attitude, Manga was warm and welcoming – prone to laughter and full of genuine Southern charm. Highlights of our chat appear below.

In the press material I received for the record, you’re quoted as saying this is the darkest album you’ve ever recorded. What led you to pursue that path? Was this something you went into intentionally, or was it something that just appeared to be where things were going as the songs were being developed?

It was the latter. It was the mood I was in at the time, I guess. I live on a mountain in North Carolina, [up] 3,000 feet. It snows so much, and we can’t leave. Our driveway’s a ridiculous incline; it’s just certain death – you’ll tumble down the mountain if you try to walk on it. So I guess I had some isolation and some of that snowed-in atmosphere, you know? I just stayed in the studio and wrote. I knew the stuff that was coming to me was more atmospheric and not as guitar-riff heavy. There was that stuff, too, but there was some stuff that was more atmospheric and maybe ethereal. I was like, ‘I don’t know if this is Bloody Hammers or not.’ Ultimately, I decided that I didn’t want to put boundaries on what Bloody Hammers is and just go with what naturally came out and not censor myself. I don’t want to ditch songs because they don’t fit in a box.

I don’t know how I do that, really. Whenever I think about an Anders Manga record, I’m thinking pretty much electronica or mostly synthesizer stuff, but Bloody Hammers is mostly guitar stuff. The reason I started Bloody Hammers was because I just missed Metal. I’m a Metalhead; I wanted to play guitar. (laughs) It’s more guitar-oriented stuff.

Bloody Hammers was initially a recording project, but it’s really blossomed over the years into its own living, breathing entity. What has been the key to keeping Bloody Hammers growing as the years have gone on?

It’s still just me, you know? I do have some guys who play with me, but they’re like five hours from me. They’re in other bands, so it’s just me. I don’t know if it’s blossoming or not! (laughs) I’m too close to it to know, but I hope people dig it. Ultimately, I just wrote songs to entertain myself. It’s just like a hobby of mine to write songs, and I try not to think, ‘Let me write songs that other people will like,’ because it’ll just be contrived. I just go wherever I like. Maybe some fans won’t like it, and some newer people will like it. I just go with whatever’s coming out naturally. I think that’s important.


How did Devallia’s input help shape what ultimately became this new record?

She helps out on some of the string parts and organ parts; I focus more on the guitar and the Moog stuff. I put a lot of Moog on this album – a lot of bass Moog. I discovered that the fuzzy guitar tone and the bid Moog synthesizer bass lines really blend well together. (laughs) So I did a lot of that; I layered a lot of Moog bass lines along with the real bass lines, and it has a nice thick sound. But she helps in a lot of ways. Once I get into a record, I’m mixing, I’m recording and I need help, and she does on all kinds of levels. From artwork to keyboards... everything.

This is your second album on Napalm. Initially in your career, you were very much an independent guy. Now that you’re working a second time with Napalm, how has that relationship impacted what you’re able to do with your music now?

Well, we wouldn’t we talking without [them]. I think it’s more the PR side of it. I usually write stuff and just throw it on the internet and walk away. (laughs) If people stumbled on it, they stumbled on it; if they didn’t, they didn’t. I did the first Bloody Hammers album just for fun. I put it on Bampcamp, I walked away and went about my day. The next day, Soulseller Records out of Amsterdam wrote me and they wanted to put it out on vinyl. I never had anything [I had released] on vinyl. I was like, ‘Fuckin’ of course!’ So that was cool. I can see how it’s much better to have a label behind you than not as far as other people discovering what you’re doing.

What are your live plans at this point? Do you intend to do some dates in the US for this album?

We hope so. Our booking agent is looking into some opportunities. I’m a Scandinavian guy; I’m starting to break a sweat at like 70 degrees. (laughs) I like to avoid summer, but we’re looking at stuff for the fall and spring and winter. They’re working on it; we’ll see what we can come up with.

I know you’re a Roky Erickson fan. What was your experience in discovering him, and what led you to cover his work and follow what he’s done over the years?

I can remember when I was a teenager vinyl collector going through records. At the time, I was just discovering The Doors and ’60s stuff. When you’re a teenager, all the stuff that comes before you makes you feel like a kid in a candy store to discover it…I got some 13th Floor Elevators stuff, but I had no idea about the Aliens stuff. It was just kind of underground; I wasn’t exposed to it. This was before the Internet; finding out stuff like that wasn’t as easy as now. When I finally did find out… man, that stuff! I love that stuff more than the Elevators. I named my band after a Roky Erickson song! I was just like, ‘Fuck. What am I gonna call this thing?’ I’m listening to Roky and go, ‘Bloody Hammer.’ That sounds cool; that’s got a ring to it. Let’s call it that.’ I assumed it was gonna sell on Bandcamp and rot and three or four people were gonna download it or something. I had no idea. (laughs) But he was just a tremendous influence on my music. I may not sound anything like Roky Erickson, but I don’t sound anything like a lot of my influences.

You’re a good 20 years into releasing records at this point. What has been the most fulfilling thing about creating music all these years?

It’s just the actual chasing of that idea, you know? At three in the morning, this idea pops in your head out of nowhere; you think, ‘Is that good or is that terrible?’ (laughs) When I get an idea and riff, I just mumble shit into my phone. I listen back [to the phone recording] when the song is finished and go, ‘How the hell did I make anything out of that? That was terrible!’ But it’s just chasing that idea and making it a finished thing. That’s what’s fulfilling for me – just making that idea a reality and finishing that music.

*Portions of this interview were edited for length and clarity.