Life Beyond "Vic:" A Chat with Eddie Roxy of Department S

As previously discussed on the site, UK Post-Punk veterans Department S (best known for their brooding 1980 hit “Is Vic There?”) are enjoying one of the most interesting comeback stories in music history.

Currently comprised of original member/former keyboardist Eddie Roxy on vocals, founding member/guitarist Michael Herbage (presently on a sabbatical), former Public Image Limited/Brian Brain/Cowboys International bassist Pete Jones, guitarist Phil Thompson and drummer Alex Lutes, the band have delivered one of the year’s finest albums with When All is Said and All is Done. After spending the past near-decade rebuilding their name, Department S are receiving the highest accolades of their career in the here and now.

The band’s return to the spotlight began in 2007, with Roxy taking over lead vocal duties for original singer Vaughn Toulouse, who passed away in 1991. Roxy saw the reunion as a chance to right some very deep wrongs in the unit’s turbulent history.

“Michael Herbage and I had become reacquainted with each other for a few years,” he says. “One evening over a few glasses of red wine in Soho, we decided that it would be a good idea and fun to do something. There’s always been a feeling within the band that we had a little bit of an unfulfilled destiny. We thought it would actually be nice to right some of the misconceptions about Department S as a band… I think the most common one was that we were a Pop band. We were so very happily working in what was the indie, New Wave genre at that point in time, and suddenly the success of ‘Is Vic There?’ took us on to Top of the Pops and the cover of Smash Hits, which was the biggest Pop music paper at the time. Originally, we were more sort of going for being on the front cover of Rolling Stone – that type of thing. Obviously, our bit would have been the NME or Melody Maker or something like that. The record label, having seen the success, then pushed the band towards the Pop field rather than allow us to stay where we were in our sort of indie bit.”

This change in musical direction, coupled with Roxy’s desire to sing up front (which is where he spent his formative years before becoming a keyboardist), led him to leave Department S shortly after “Is Vic There?” He soon resurfaced as the singer for Dream Sequence, an act that found some success in Europe with their 1982 singles “Outside Looking In” and “Funking Rebels.”

“It was really something that I wanted to pursue. I wasn’t happy sort of sitting at the side playing the keyboards.”

Succumbing to the weight of record label pressure and diminished expectations, Department S called it a day in 1982. A number of tracks recorded with Blondie engineer Dave Tickle prior to the band’s dissolution (and originally intended for a full-length album) were later released in 2002 as Sub-Stance.

“The vast majority of it I liked; I thought it was good stuff,” Roxy says of Sub-Stance, which was mostly recorded after he left the band. “I did think that [album] generally veered into an area that was a but poppier and lacked the Rock genre that we were looking to inhabit, but it's all good stuff. I think Sub-Stance is a good album that [stands] the test of time. You can’t knock it from that point of view. I still get people coming up today saying, ‘I bought a copy of Sub-Stance the other day; I love it!’ It’s rather nice to know that people are still going out and buying it.”

Fans are also buying and enjoying Department S’ other recent releases, including the Wonderful Day EP in 2009, the 2011 live album Mr. Nutley's Strange Delusionarium and two singles. The great Terry Edwards, who originally guested on the Sub-Stance sessions, has been a frequent presence on the reformed band’s music, both on record and in the producer’s chair.

“Terry Edwards essentially comes from the east end of London, as did most of the band,” Roxy explains. “I think there’s somewhat of an old relationship through that, and that’s how everyone bonded with Terry in the first place and have been friends with him for years. Terry is very user-friendly, and he’s a musician’s musician. He’s somebody who’s played with absolutely everyone. He was responsible for introducing us to [Sex Pistols bassist] Glen Matlock and getting him to play on Wonderful Day. In the studio, he’s very much a perfectionist. He’s real proper producer who sits down and makes you do things. He also takes you out of your comfort zone and makes you do things you probably wouldn’t have thought of doing in the first place.”

For When All is Said and All is Done, the band utilized the in-house talents of Pete Jones in crafting the album’s sound and direction.

“He’s done such a good job producing this album. We’re getting so many people coming back and saying, ‘I think the production’s really strong’ and things like that. We’re very much in control of our own destiny. We don’t need to get a third party to come in and start helping us in that. We’ve already started work on the next album because we’re now in a situation where it’s much, much easier for us to start doing those sorts of things.” 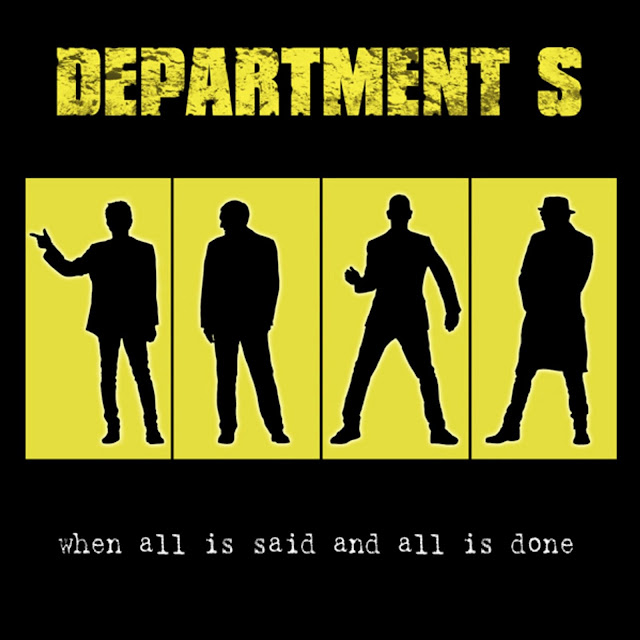 Currently maintaining an active live schedule at home, Department S are looking into doing some shows in the US in the not-too-distant future. Anyone who makes it out to see the band perform in 2016 is sure to hear “Is Vic There?” – the number that started it all for the band. There are groups all over the word struggling to create that one song that resonates with people, but many will ultimately fail. Why was “Is Vic There?” Department S’s magic bullet?

“First and foremost, it’s got the most fabulous guitar intro, and that's the thing that draws you into the song,” Roxy replies. “A number of people, particularly in Europe, have said to us that it’s such an iconic guitar intro that it’s one of the ones that everyone of their generation learned when they first started guitar. I’m talking about guys who are around their early 40s now. When I was a kid, everyone learned the introduction to ‘Smoke On The Water.’ In Europe, lots of kids come up to us [and say, ‘Is Vic There?’] is the first thing I ever learned to play. It was the first thing that inspired me.’ I think the beauty of the song itself is the simplicity of it. People say to me, ‘Oh, don’t you hate doing it again and again and again – and the fact that everyone thinks Department S is ‘Is Vic There?’ Well, no, that’s our gatekeeper; that’s the thing that opens the door for us everywhere. It’s something we’re still very proud of to this day.”

With a strong new album fueling a resurgence of interest in Department S, Roxy is thrilled to have an opportunity to continue the band into the future.

“Our ambition in life when we first started was to be a mighty fine Rock ‘n’ Roll band. That’s really where we’re still trying to get to.”